Leader of the Pack: “The Wolves,” at the Playcrafters Barn Theatre Through September 22 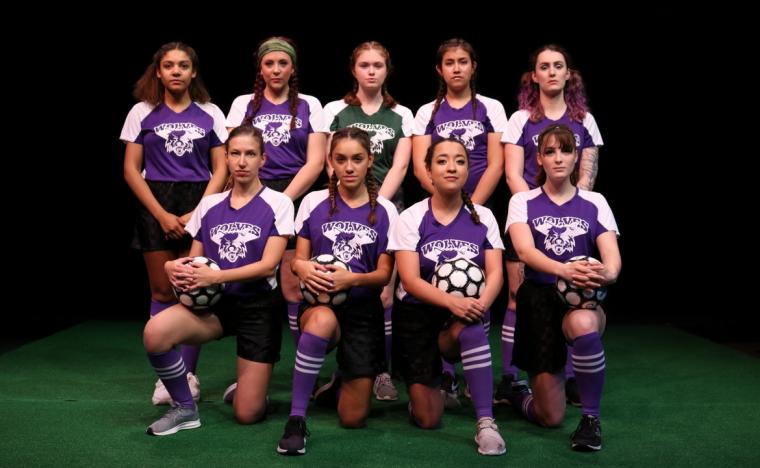 As I parked in the Playcrafters Barn Theatre lot, I noticed a deer lingering in the tree line. The sight made me chuckle, as Bambi apparently missed the memo that the show currently playing is The Wolves. Or maybe it knew the title refers to a girl’s indoor-soccer team named after the big, bad woodland creature.

Inside, Ryan Brix-Studer’s set was turf accented by the expected white soccer-field lines, a bench, and two bags of soccer balls. This simple, to-the-point design established the scene nicely. Eric Teeter’s sound design was simultaneously incredibly catchy – a little on the nose, maybe, but I enjoyed it. For a brief time on Friday’s opening night, I was the only one in the house and had my own little dance party. But then more audience members came in and the show began.

It’s hard to adequately explain The Wolves, as it’s a play about soccer, yet also a play that has nothing to do with soccer at all. The girls have their sport as their underlying connection, but if you’ve ever been part of a group of teenaged girls – or even around a group of teenaged girls – you understand that there are invariable subset cliques and pairs found within. But when the team in playwright Sarah Delappe's script finds itself in the midst of tragedy (that I won’t spoil), the players must figure out how to cope together. 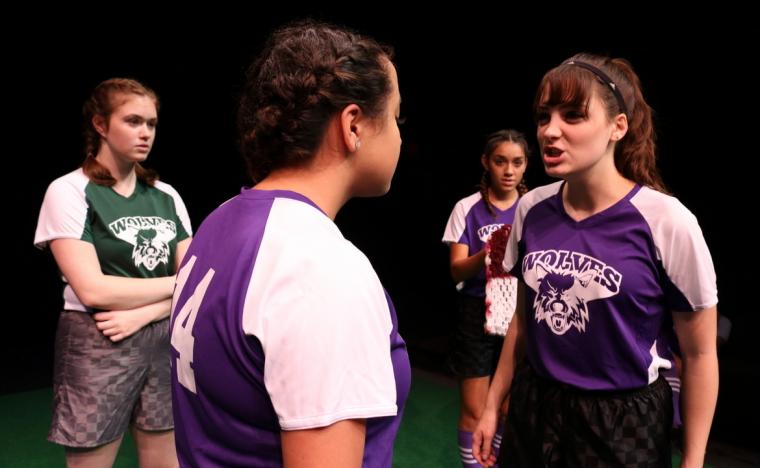 When the show kicks off, and for a fairly long while after, the team warms up with pregame stretching and conversations are scattered throughout. Delappe’s dialogue is written in a way that overlaps so much that, at times, you’ll have to decide which conversation you want to follow. At other times, however, you’ll know without a doubt to whom you should listen. Director Cynthia Taylor routinely has the team stand in an oval, stretching with their backs to the audience – a helpful view, as the girls are only referred to by their jersey numbers. While I appreciate the reasoning to have the girls in their same spots within the oval every time (it pays off near the end of the show), I wish that, initially, the girls could have rotated so all numbers and faces would have been visible at some point, no matter where you were seated. With the players dressed nearly identically, and even their hair styled similarly, differentiating teammates was tough at times.

Overall, though, Taylor did a nice job using the Playcrafters space, shifting between sitting, stretching, and soccer drills so the 90-minute one-act never felt stagnant. Some of the production’s shining moments occurred when the off-stage coach blew a whistle and the team scattered through the house, leaving two or three teammates on stage. These more intimate moments often felt the most honest and personal, as though each girl was afraid to be her true self within a larger group of peers.

New girl #46 (Jo Vasquez) tries nearly in vain to join conversations when she picks up bits of what people are saying but is more often than not ignored – and that’s when the other girls are being kind. Vasquez bears the brunt of trying to fit in and garners quite a bit of sympathy, especially when up against mean girl #07 (Valentine Chenus). In fact, Chenus’ portrayal made #07 so unlikable and rude that I was a little disappointed when, after injuring her knee (taking no responsibility and blaming Madison Duling's assertive team captain #25), she still manages to show up. You might feel sorry for #07 if she could only stop trying so hard to be cool and just be kind for two minutes. 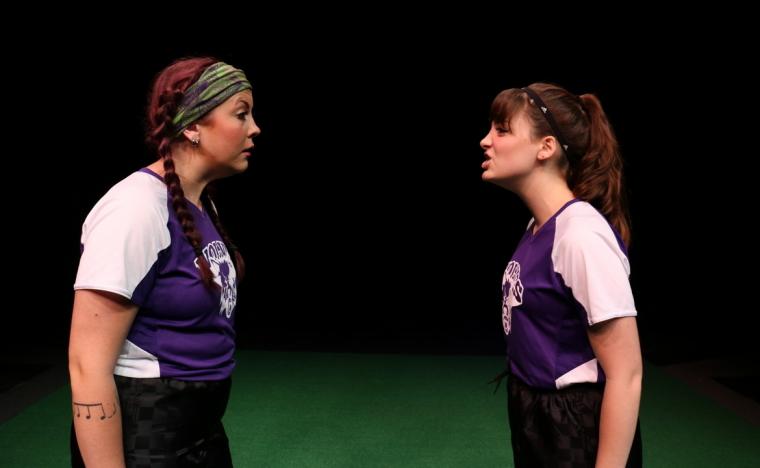 With each teammate, you can recognize different personalities that, as a whole, compose a typical pack of teenaged girls. The naïve, optimistic #02 (Inna Gomez) was particularly engaging and sweet. Anxious goalie #00 (Delany Gahagan) spends the bulk of the show running off stage to vomit without saying a word – a shame, because when Gahagan finally does speak, she left me craving more of her story.

Among the rest of the teammates, #13 (Alice Guzman), with jersey-matching hair, was a tad hyperactive and ridiculous. Amaris Oliva-VanDeWalle’s #14 is #7’s way-nicer sidekick, making you wonder why she puts up with her friend’s shenanigans. While we learn that the parents of #11 (CeCe Olvera) are therapists, we don’t find out too much more that might distinguish her from bubbly #08 (Arissa Constantino). Ultimately, though, this story is about a team as a unit. There’s no “I” in team, and in this production, that idiom rings true.

By the time the first (and only) adult, Lidia Gomez’s Soccer Mom, winds up on stage to deliver a delirious monologue that the girls seem to not fully comprehend, The Wolves had managed to pull on all my heartstrings. This passionate team of actors will make you flash back to high school and leave you wanting orange slices, plus a chance to talk about the show. With their latest production, Playcrafters has certainly scored.

The Wolves runs at the Playcrafters Barn Theatre (4950 35th Avenue, Moline) through September 22, and more information and tickets are available by calling (309)762-0330 or visiting Playcrafters.com.