Live and Let Dionysus: Genesius Guild’s “The Bacchae” at Lincoln Park through July 7 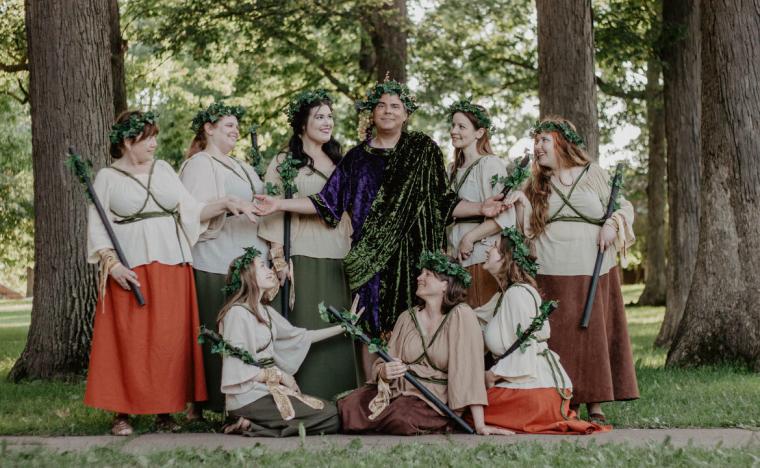 Nestled between Lincoln Park’s tall, mature trees, a handful of patrons braved bugs and humidity to settle around the Don Wooten stage for Genesius Guild’s opening night performance of The Bacchae. It’s honestly a shame it wasn’t better attended, because director Patti Flaherty was at the helm of a glorious night of outdoor theatre.

Written by Euripides, The Bacchae is a Greek tragedy through and through, but has a surprisingly easy plot to follow. The god Dionysus (Mischa Hooker) appears and announces his quest to avenge the slander that he is not the son of Zeus. Dionysus then sets off to prove to Pentheus (Jacob Lund), and the whole town of Thebes, that he is a god.

From the onset of the traditional opening parade – in which the audience first takes in the actors of The Bacchae – I was struck by Ellen Dixon’s arresting costumes. The chorus of women (Bella Kuta, Liz Sager, Zoe Grabow, Kitty Israel, Andrea Braddy, Sarah Willie, and Kathy Calder) wore distinctive, flowing skirts and shirts, with chorus leader Choragos (Melita Tunnicliff) distinguished by a darker shirt. But every single costume was stunning. In robes of deep purple and green, Dionysus particularly stood out from the crowd, and Hooker played a powerful Dionysus, perfectly projecting his voice over the park’s ambient noises. It wasn’t any wonder the chorus members found themselves preoccupied with this god among men; I also found myself drawn to Hooker over everything else.

The chorus was mesmerizing as a unit, as they spoke both in unison and in turn – efforts so captivating that as a young girl and her father were bicycling through the park, the girl was persuaded to stop and watch for a while. (The young girl’s eyes lit up as she gazed upon these eight strong women onstage, as they chanted and exclaimed details of the action.) The chorus punctuated each scene, explaining both what had already happened and what would follow, which is always a nice touch. The women are on stage the whole time and I appreciated that they all seemed to be actively listening and engaged in what unfolded. The high points of the chorus, for me, were when they worked together, creating an earthquake. While it hardly seems possible that sixteen feet stomping simultaneously could cause such a significant rumble, the noise reverberated off the stage, echoing into the park.

Since we, as an audience, are told from the beginning that Dionysus is a god and naysayers will be sorry, the ever-doubting Pentheus is The Bacchae’s villain. But Lund is so spectacular it’s hard to see him as evil. (Lund is physically smaller that Hooker, so it was almost funny to see Lund ignited in anger over Dionysus while trying to make him bend to his will.) Lund’s metallic sash was eye-catching and his mask, like the others constructed by Bob Hanske and painted by Emma Doling, was probably my favorite with its sharp, pointed nose. Traditional Greek theatre was always performed in masks, and for Genesius Guild to uphold this tradition and do it so well is a testament to the organization's commitment to the arts.

By the time we meet Pentheus’s mother Agave (Susan Perrin-Sallak), the audience is aware of how this story will end. Flaherty’s pre-show announcements made no secret that Euripides wrote The Bacchae at the end of his life when he was bitter and petty, so it isn’t so much a surprise as it was unsettling that the chorus appeared so delighted by characters being torn limb from limb. Perrin-Salak brought fervor to the stage, as Agave was first afflicted with madness, and then horrific grief at her actions. Earlier in the production, Pentheus explained that his name means grief and that certainly sums up his story. Genesius Guild is obviously well seasoned with their open-air shows, but it was more than fitting that, as Rock Island’s daylight was ending and the sky grew darker, so too did The Bacchae’s subject matter.

Lighting designer Andy Shearouse’s work became more evident as the sun set and, while the lights were simple, they packed a big punch, occasionally glowing red in moments of deep passion. I found it especially interesting to see how the lighting changed the look of the show; for instance, I thought Guy Cabell’s Cadmus costume was a sage green, but once under the stage lights, it became a subdued gold. And the detailing on several characters’ metallic costumes sparkled brilliantly under Shearouse’s lights. Shearouse cannot take credit for the fireflies that appeared after dark – their glowing tails adding to the mystical experience that was Dionysus’ reappearance on the balcony – but it was a nice touch that they did.

This production of The Bacchae is a real gift to the Quad City area – not only for being free theatre (though donations are welcome and warmly appreciated), but for bringing a classic Greek tragedy to life in a non-pretentious, completely approachable way. Genesius Guild’s production will be around for one more weekend: Will you be lucky enough to experience it?