Loads of Fun: “Knuffle Bunny: A Cautionary Musical,” at the Circa '21 Dinner Playhouse through June 30 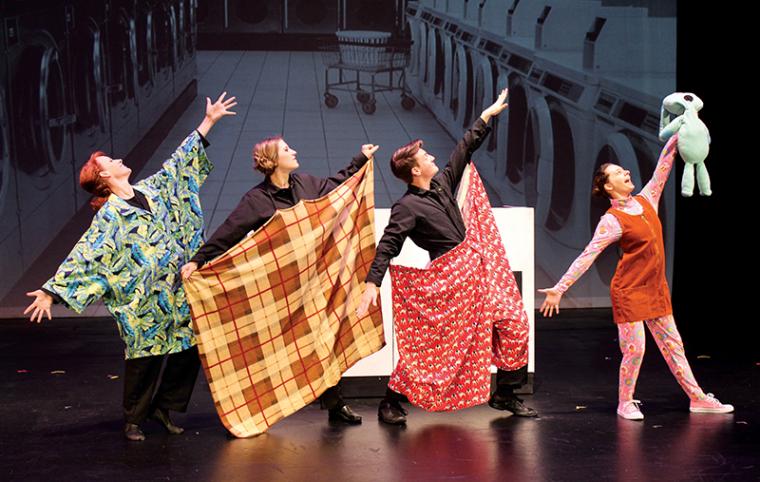 Life is tricky with Trixie, considering she’s a toddler who communicates only in gestures and gibberish. Such is the premise of the Circa '21 Dinner Playhouse’s absolutely delightful children’s show Knuffle Bunny: A Cautionary Musical.

It’s a simple story, really: Trixie (Cydney Weitzel) loves her stuffed animal Knuffle Bunny (presented, in puppet form, by Erin Churchill). Trixie’s dad (Michael Penick) takes her and Knuffle Bunny to the laundromat in an attempt to help out Mom (Miranda Simonne). But Knuffle Bunny gets thrown into the washer, and consequently misplaced, by mistake. Children’s theatre can sometimes be a little over the top, but director/choreographer Andrea Moore really gets to what family audiences are after, and at the show's June 12 opening performance, she delivered straight-to-the-point child’s play.

Books adapted for the stage sometimes lose those special qualities that made them popular. However, in this case, Mo Willems, author of the original Knuffle Bunny book, wrote the script and lyrics with music by Michael Silversher. Circa '21’s stage featured black-and-white pictures of different New York City locales projected in the background (an effect designed by Bret Churchill) as the action comes to life in front of it, making Knuffle Bunny: A Cautionary Musical feel exactly like the mixed-media art in its literary counterpart. And costume designer Gregory Hiatt clearly spent time with the picture book in hand – his designs were cleverly reminiscent, but not replicas, of its illustrations.

Some cynical adults may wonder why Dad bothers to extend the effort to go to the laundromat with what is really only half a load of laundry, but I promise the kids will be having enough fun watching Trixie and Knuffle Bunny hop around that they won’t notice one bit. Penick and Weitzel perform larger-than-life actions that appealed to everyone on Tuesday, including taking part in a wild chase through the audience. Along their walk, they also meet another favorite Willems character designed and built by Seth Chappell – it’s Pigeon, in puppet form! (Just as Pigeon is hiding in every Willems book, so, too, can he not be left out of this musical.) 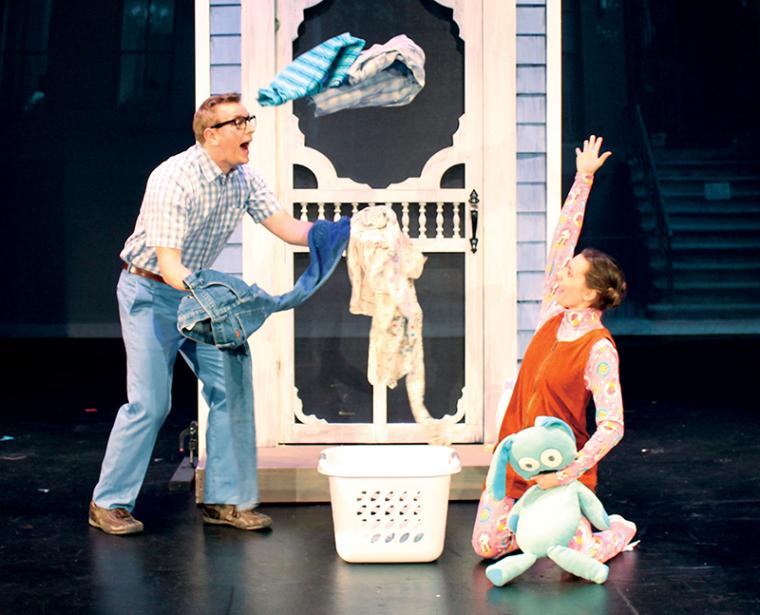 Upon arrival at the laundromat, they burst into the super-catchy song “Washy Washy” while larger-than-life laundry dances around the room thanks to the wonderful puppeteering trio of Erin Churchill, Kirsten Sindelar, and Jeremy Weinstein. With Penick providing an unmissable solo, the only way this scene could have been more enjoyable would have been through the addition of a bubble machine.

Somewhat surprising was Trixie’s song “Aggle Flaggle Klabble.” After some brilliantly staged tableaux that capture all the stages of a tantrum without our having to experience one, Trixie brings down the house singing gibberish Dad does not comprehend. Musical director Shelley Walljasper really guided Weitzel through an emotional tribute to a beloved stuffed animal while singing complete nonsense, and the number serves as a thoughtful reminder that even the smallest humans have big feelings, even if they can’t verbally convey them.

Level-headed Mom knows what’s up right away and repeatedly asks about Knuffle Bunny’s whereabouts while Dad rambles and Trixie cries. I really wanted Simonne to power over them for a second to really drive the question home, but while that moment was missed, the performer's Mom is witty, delivering some of the best one-liners and exchanges in the show. Her relatable “You'd better!” tone will resonate honestly with any parent. 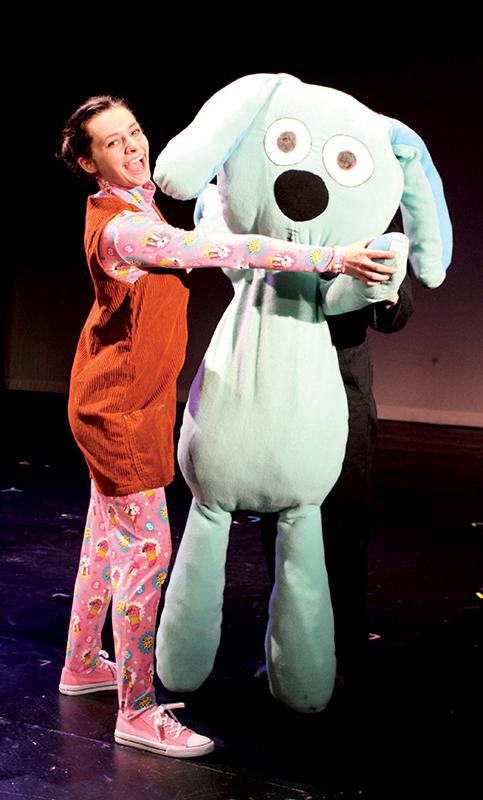 Willems is my absolute favorite children’s author because his stories appeal to adults as much as kids. There’s some simple silliness mixed with snark in Willems’ many books, and that holds true in this musical adaptation of his real-life adventures with his own daughter Trixie. Yet Knuffle Bunny: A Cautionary Musical goes even deeper than the original book in becoming a poignant take on parenting.

A lot of media aimed at children portrays parents and adults as buffoons, and Trixie’s dad is no exception, bringing to the laundromat a copy of Laundry for Dummies. (I get it. Kids love watching grown-ups acting silly. Mine certainly did!) Yet Dad’s song “Really, Really Love You” manages to encapsulate that feeling of desperately loving your children and still feeling as though you’ve failed them. He then turns around and becomes the hero every young child thinks her or his parent is while battling the awesome (yet not scary) laundry monsters to rescue Knuffle Bunny from his waterlogged washing-machine adventure.

Even if you know nothing about Mo Willems and his trilogy of Knuffle Bunny books, you can appreciate this tale, as Circa '21's production is well-paced for young audiences and fully loaded with dancing, singing, and physical humor. Knuffle Bunny: A Cautionary Musical is uncomplicated, touching, and so enjoyable that I would absolutely see this charming production again. If you’ve ever been subjected to reading or watching the same inane kid’s thing over and over again, you’ll know that’s the highest praise I’ve got.

Knuffle Bunny: A Cautionary Musical runs at the Circa '21 Dinner Playhouse (1828 Third Avenue, Rock Island) through June 30, and more information and tickets are available by calling (309)786-7733 extension 2 or visiting Circa21.com.