A Long Time Ago, and a Galaxy Far, Far Away: “Silent Sky,” at the Richmond Hill Barn Theatre through July 24 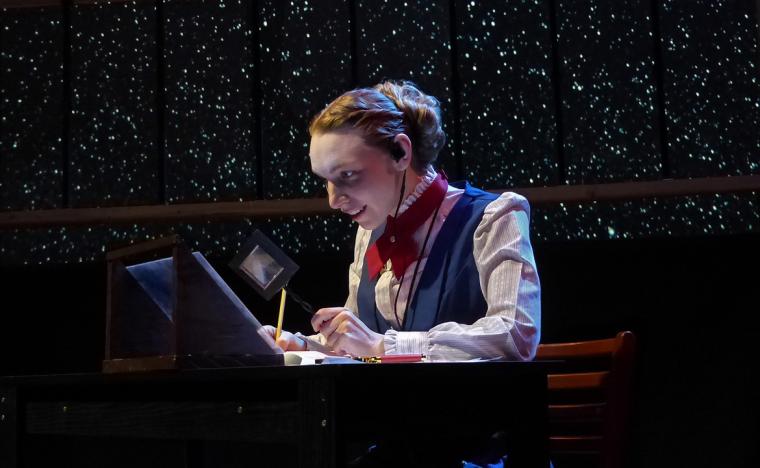 Have you seen the gorgeous Webb telescope images that were released this week? If you haven’t, you should definitely check them out. If you have, you’ll know that director Jennifer Kingry’s production of Silent Sky pairs beautifully with them. In fact, Kingry really couldn’t have asked for a better real-world tie-in with her show now running at the Richmond Hill Barn Theatre.

Playwright Lauren Gunderson's Silent Sky is the real-life, though fictionalized, story of Henrietta Leavitt, a female “computer” at the Harvard Observatory in the early 1900s who made some dazzling discoveries in the measurement of distance of stars. Henrietta faces workplace challenges merely due to her gender while also dealing with family responsibilities and maybe even love, and I will readily admit that, in my view, Gunderson's fictionalized pieces were the plot's most engaging aspects.

Math and science don’t interest me much (hence that theatre major of mine), so watching a group of ladies catalog stars on Thursday night wasn’t exactly a thrilling premise. But while it might seem insulting to liken Richmond Hill's new production to a soothing lullaby, there you have it. Given the stunning, twinkling backdrop with projections designed by Larry Lord, the collectively gentle demeanor of the five actors, and the relatively calm pacing, Kingry's show is a glimmering lullaby of a production that’s quite unlike anything I’ve ever seen. 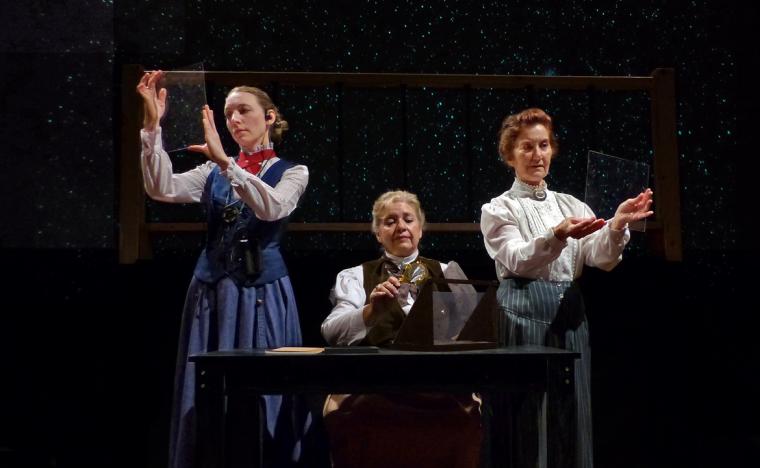 My first indication this presentation would be surprising was entering the theatre to realize Silent Sky is not performed in the Barn’s traditional in-the-round format. Mike and Jim Skiles built a platform over one section of seating with a large screen behind it for Lord’s lovely projection images. I quite liked this inventive set up; it was a fun shift. And a starry playlist, also designed by Lord, was heard during the preshow and intermission. These brilliantly executed musical selections mixed styles and decades, offering a little something for everyone, and I enjoyed the early tracks so much that it was almost a shame when the production had to start.

When we first meet Henrietta (Kady Patterson), she’s standing almost frozen, staring skyward. Then we meet her sister Margaret (Elizabeth Melville), and the drama begins. Henrietta is a fairly straightforward character and Patterson brings a dreamy quality to her line delivery: Henrietta’s passion is definitely the sky, and Patterson's portrayal suggests that Henrietta’s mind is always focused a bit heavenward, and never truly grounded in real life. Melville’s take on Margaret, meanwhile, was an interesting one, as Henrietta's sister always seemed vaguely annoyed by her sibling and I wasn’t quite sure why that was. Sure, Margaret was being left behind, but Henrietta did ask her to come along to Harvard. And honestly, were I at Harvard, I wouldn’t have gone back to Wisconsin to visit, either, blood relative or not. I feel like Henrietta was internally thanking her lucky stars she got away to work with actual stars, even if her astronomical contributions were dismissed simply because of her gender.

Henrietta’s Harvard colleagues include Annie and Williamina, and playing the latter, Diane Greenwood had a glint in her eye and a natural mischievous quality that made the her role, to me, the play's most endearing. When Greenwood was on a roll, she was delightful. Unfortunately, the Scottish accent that came and went was the low point of her performance. While I can appreciate the attempt, I would have much preferred Williamina to have no discernible accent – it would have been less distracting and would have let Greenwood really concentrate on more important aspects of the plot and the fun of the show. Terri Nelson’s Annie, meanwhile, was more of the mother hen variety, and she countered Greenwood’s energy to make the pair a great Silent Sky asset. It’s clear that Annie and Williamina adore Henrietta, and I do believe the feeling is mutual. 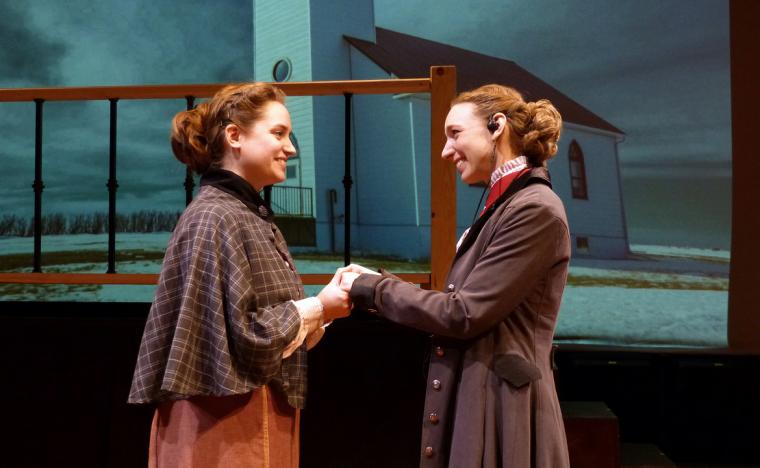 Between discovering blinking stars and how to figure them out, Henrietta was also, perhaps, involved in a budding romance with her supervisor Peter (Kevin Maynard). I'll admit it: The awkward, self-conscious, maybe-romantic scenes between Maynard and Patterson were definitely my favorites of the evening. Maynard could truly offer a master class in looking longingly at your oblivious crush. It was disappointing, then, to discover that his Peter character was completely invented by Gunderson. I do understand that Gunderson's script is based on reality, but it really makes me sad for Henrietta that her life was so singularly focused on, as the character says, “her Heaven.”

Silent Sky offers a quiet look at what Henrietta’s life was like, and her work only becomes a small part of that. In truth, when Gunderson tries to break down the scientist's discovery into basic terms with an assist from music and projected blinking stars, I didn't completely get it. But luckily, I didn't need to. Patterson’s final smile was touching, and while I didn’t leave the theatre with an overwhelming abundance of scientific appreciation or even a tremendous belief in Henrietta’s “girl power,” I now know the name Henrietta Leavitt. I believe that's as good a takeaway as any.