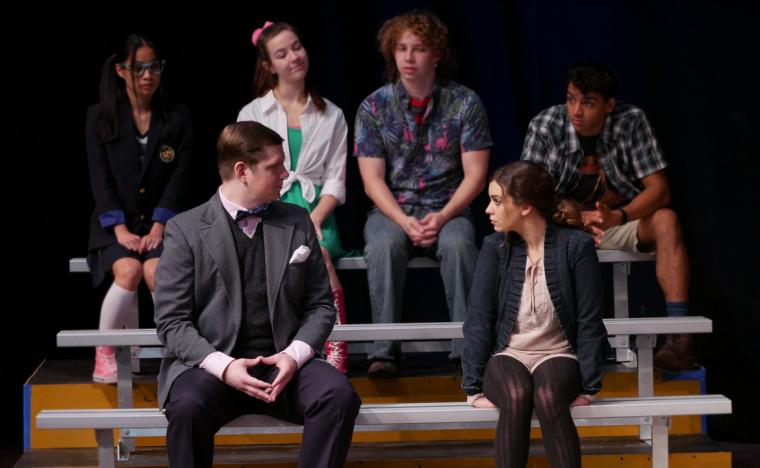 It was great to be back at the Timber Lake Playhouse, a capacious space that somehow still has a cozy ambiance. There, I attended the opening-night presentation of The 25th Annual Putnam County Spelling Bee, helmed by Natalie Novacek and music director Michael McBride. This funny, mostly lighthearted, and delightful 2005 musical has music and lyrics by William Finn (who did the same job for the wonderful A New Brain), a book by Rachel Sheinkin (with additional material by Jay Reiss), and was conceived by Rebecca Feldman. It's based on the play C-R-E-P-U-S-C-U-L-E by The Farm (a collective of writers and actors founded by Feldman) and made it to Broadway, winning two Tonys, one of them for Best Book of a Musical.

Putnam County focuses on six spellers on the cusp of childhood and adolescence (well, six on stage anyway – more about that momentarily) competing in the titular bee. Two adults run the event, assisted by a "comfort counselor" who helps the eliminated spellers cope. The additional spellers are audience members who, on Thursday at least, were clearly given their lines ahead of time. Regardless, the recruited folks on opening night were quite funny. Everyone in the actual cast is amazingly talented, and most are on stage for the whole show. Also, a few occasionally grab costume pieces to play parents of other characters in flashbacks – a conceit that, surprisingly, works well.

Margot Frank plays Rona, the host and a past County Spelling Bee winner herself. Frank's character has a welcoming persona and a mighty voice, and is reminiscent of the Narrator in Joseph & the Amazing Technicolor Dreamcoat – though, regrettably, she doesn't get as much center-stage time. Darren Mangler portrays Vice Principal Panch, the word pronouncer. Panch is a bit of a buffoon, but Mangler plays things straight and dry, which I loved. Eli Nash is the other adult, Mitch, who stunningly tears up the joint with the rousing "Prayer of the Comfort Counselor," backed up by the rest of the cast. It's a veritable showstopper, so it's a good thing it's at the end of Act I.

I was impressed that the (adult) actors playing participants did not overplay "Look at how much I can act like a kid!” – an attempt ubiquitous in other shows I've seen. They certainly do act like kids, complete with excitability, romping, and mood swings, without laying it on with a trowel. Putnam County's group includes the requisite gifted hyper-achievers and a couple of outcasts.

Olive, played by the superlative Jenessa Altvater, has parents who can't be bothered to attend or even provide her with what she needs to compete. She is instantly sympathetic – smart, self effacing, yet alone. [Eventually, Olive's mom (Quinn Martin) and dad (Jack Hale) make an appearance, and the trio's "The I Love You Song" is one of the saddest moments of the production, and sung beautifully.] Roy Brown's morose William has been beaten down by life already – a truth exemplified by his veneer of bluster and Panch's continued mispronunciation of his surname, despite repeated corrections. William is the star of one of my favorite numbers: "Magic Foot." It's dazzling to see Brown's William shine after his hangdogging around, and all the bee kids join him at the end (albeit only in his mind).

You'd be forgiven if you mistook Megan Graal for a ringer – an actual 10-year-old playing the perky, passionate Logainne. You'll also root for her, as her pushy parents are very present, which can be as damaging as having absent parents. Katelyn Baughman is also convincing as the frighteningly overachieving Marcy. Her "I Speak Six Languages" is another Putnam County highlight, and she also has an amusing encounter with someone no one else can see – a presence who gives Marcy a refreshing perspective on the competition. College student Caleb Mathura, meanwhile, already has an impressive résumé, and although the incident is played for laughs, a common but embarrassing problem arises for his character Chip during the competition. He portrayed the bit both adroitly and limberly – even though, on Thursday, perhaps due to a sound problem, I couldn't understand most of the lyrics to Chip's number referencing his dilemma.

Despite being a nerd and English-language enthusiast myself, I wasn't completely smitten by an overachiever here. But I did almost lose my heart to the sweetly loopy Leaf, played here by Joey LaPlant. Leaf is not marked by the brainiac label; the opposite, actually. He's the black sheep in his large, home-schooled family. Yet when he's at the mic, rambling off-topic, Leaf is suddenly possessed, seemingly by his higher self, who spells what the actual boy thought he couldn't. LaPlant is thoroughly physically convincing as a pre-teen, and his frequent, exuberant smile under Leaf's mop of hair relieves the atmosphere of nervousness everyone else projects.

Hopefully this won't be a spoiler, but Timber Lake's The 25th Annual Putnam County Spelling Bee ends with a gratifying "where are they now" coda: a device popularized by the 1973 film American Graffiti that has, I believe, been overused since. However, I welcomed it here, as it was a reminder that our pasts may help shape us, but they don't define us. Recently, it was revealed that Disney plans to ruin – I mean, adapt – this show for film. So see it yourself live now in Mt. Carroll. It is so worth it.