March-ing to the Beat of Their Own Drummers: “Little Women: The Musical” at St. Ambrose University’s Galvin Fine Arts Center through May 1 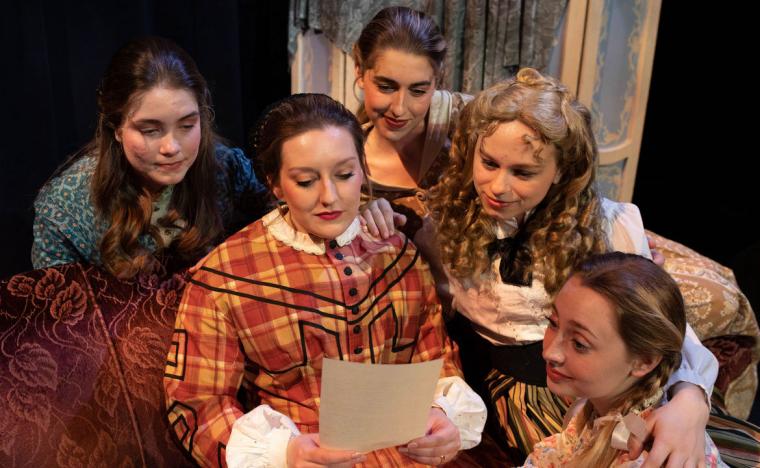 Many Ambrosian theatre students’ stories have been guided by Cory Johnson and Kris Eitrheim, which makes it almost fitting that a literary classic marks the duo’s final on-stage chapter at St. Ambrose University (SAU). Little Women: The Musical, Louisa May Alcott’s story as adapted for the stage with a book by Allan Knee, music by Jason Howland, and lyrics by Mindi Dickstein, is not some big and splashy farewell. Rather, this is an extremely well-thought-out presentation showcasing the formidable Johnson/Eitrheim talents one last time before their retirements.

Alcott's tale goes through no remarkable changes, and we fans definitely don’t need or want it to. Little Women is a classic, and under Johnson’s direction, her cast gives the production magnificent heart. Condensing this massive novel means the show loses some details, certainly. But at least during Thursday’s final dress rehearsal, the audience was still able to absorb the story in a deeper way than a simple reading or film viewing would allow, thanks to the passion of the onstage talent.

Eitrheim’s set design is a stripped-down representation of the March family’s modest home. The juxtaposition of the sparsely decorated living room and Jo’s attic refuge is metaphorical in that Jo never feels quite herself in the “real world,” preferring instead time spent with her sisters and her imagination. When paired with Daniel Sheridan’s stunningly bold lights, the entire set takes on a most intangible quality. The house is there, certainly, but minimalistically, so as not to overpower the soul of the production: Alcott's beloved characters. 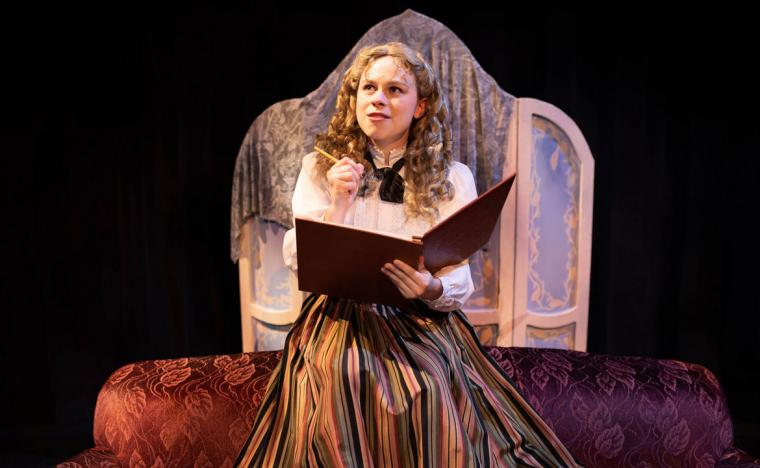 And true to character they are. Time moves swiftly in Knee’s telling, so the only story we truly become invested in is Jo’s, and Quinnie Rodman somehow manages to bring this young woman's stubborn exuberance to life in a way that’s endearing rather than abrasive. Rodman is exceedingly likable and passionate, brightly shining in the presence of her stage sisters.

It’s a shame that the musical's book doesn't let us dive deeply into the others’ stories, as well. Bethany Anderson’s take on the eldest Meg might be straightforward, but you can’t help rooting for her successes. Julia Beltz is splendid as Beth, portraying a gentle meekness that well-suited the character, though when she meets her untimely fate, it wasn’t the sob fest it might have been had we been given more time with her. Then there’s Katie Link, who’s so petulant as Amy that she made me rethink why the youngest had always been my favorite sister of the four. (I promise: I’m being complimentary.) These little women are patiently guided by Marmee (Peyton Reese), whose first song was absolutely heartbreaking, and slightly less patiently guided by Caroline Sieren’s comedic Aunt March.

These women were well-matched by the gentlemen they associate with. Joe Lasher is the embodiment of youth and, while I never felt as though his Laurie matured to a point where marriage would even cross his mind, Johnson sure played up his cuteness – especially with his return to the stage in the second act. (Which is sweeter: His surprising spin hug or the adorable Eskimo kiss?) Charles Murphey’s charming Mr. Brooke and Kyle DeFauw’s sweet and uptight Professor Bhaer nicely rounded out the sisters' would-be suitors. 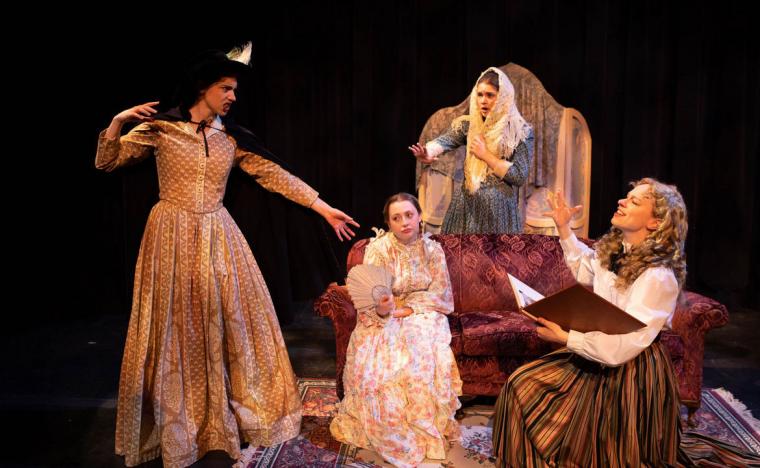 The familiarity of this material feels like coming home – which is how spending any time in the Galvin Fine Arts Center is for me, as well. Sure, Thursday’s dress rehearsal still had a few kinks to work out (with the microphones, especially). And I will say that it made my heart happy to know that, all these years after my undergrad days at SAU, an entirely new generation of students will still be getting the “Don’t run so close to the cyc” note. But there was just so much to be in awe about. With Ron May as their music director, the cast sang beautifully, and Andrea Moore’s choreography was perfectly suited to the 1860s time period. And did you want me to gush about the costumes? Johnson designed those, too, with a hair-and-wardrobe assist from Dianne Dye, and they were (chef’s kiss).

Every single detail in this production was impressively thought out, so if I’ve ever written a review that seems too nitpicky for your liking, it’s because, years ago, Johnson taught me the importance of shaping even the smallest things. Take her scene changes, for example. Everyone hustling around was in costume, but most importantly, incredibly efficient. And don’t even get me started on some of the gorgeous stage pictures she created. If the actors are where they’re supposed to be, you’ll wish you had your camera (and wish that taking photos was permitted) to remember the images always.

Come Sunday afternoon’s closing, memories are all that will be left of this lovely production. Yet much like Alcott’s work, Johnson and Eitrheim’s legacy will continue – if no longer in locally produced work, then in the memories of their encouragement, guidance, excellence, and countless productions elevated simply by having their names in a program. Little Women: The Musical is their perfect swan song: an astonishing, beautiful, and occasionally bittersweet showcase. Thank you, Cory and Kris. Oh, how you will be missed.