Mercury Rising: “We Will Rock You,” at the Circa '21 Dinner Playhouse through March 11 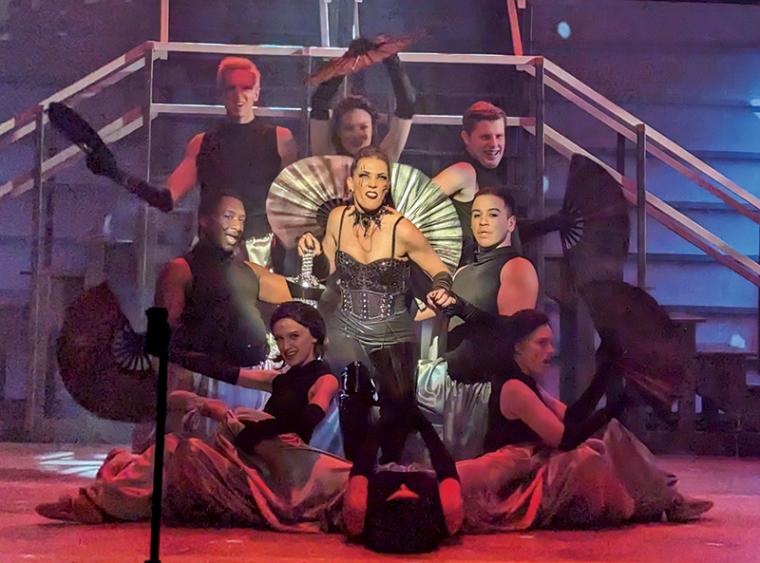 Sarah Hayes and ensemble members in We Will Rock You

We Will Rock You, which just opened the Circa '21 Dinner Playhouse's 2023 season, follows Galileo Figaro as he “Breaks Free” from the techno, highly commercial, non-rock music world around him. He leaves home, meets Scaramouche after being caught by the dominating anti-rock forces Killer Queen and her assistant, and gets thrown in jail for his musical tastes. Galileo and Scaramouche meet the Bohemians along the way – other people that have resisted their world's techno rigidity, and together, they all set out to restore rock music to its former glory.

This jukebox musical features songs by Queen that are woven into the story, and I'll admit: When I saw the show on Sunday, I wasn't a fan of its script. I couldn’t tell whether it was written as extremely self-aware camp, a techo-rock concert, or a serious post-apocalyptic musical drama. However, and of course, the script is completely beyond Circa '21's control, and what the actors and designers pulled off – as led by book and music directors Amy McCleary and Ron May – was visually and audibly impressive. This musical's artists were the champions, my friends.

We Will Rock You's design team created a high-quality rock-concert mood. With some updated lighting equipment – an exciting addition to the space – designer Haley Brown created a multidimensional, vibrant, futuristic, rock-concert extravaganza. With miles of LED light strips, lots of interesting textures and colors, and what seemed to be millions of light cues, it stood out, to me, as potentially the best (and most!) lighting design I have seen at any area theatre during my year-long reviewer-ship.

Equally stunning were Bradley Robert Jensen’s costume designs, which popped and shined brightly against the backdrop of the incredible monochromatic (and enormous) set and in harmony with the gorgeous lighting design. The costumes were futuristic, clean, and bedazzled – true rock-concert material. 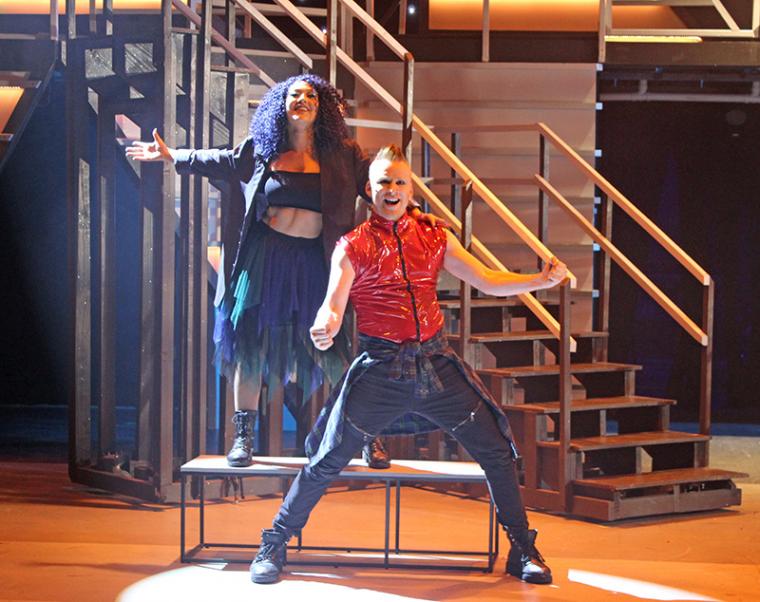 Khalil Hacker’s digital-media work, displayed on a number of TVs hovering along the backdrop of the set, was a nice addition to the We Will Rock You world. There were lots of textures, motion graphics, and social-media clips, as well as some important visual elements that aided in the action of the story, or simply added interesting ambiance. Stage director McCleary's show was of high quality, but also sometimes a bit distracting, as there were elements that tended to steal focus. Perhaps having fewer TVs would've been more effective, or having a singular, bigger one in the center as a focal point.

All of the stunning design work across the board, though, accentuated McCleary’s incredible staging and choreography. From techno dance to fan-ography to the show’s post-bows final number, her musical numbers rarely featured a dull moment. Sometimes it was quite laughable to see how the conceivers of this show’s script fit various songs into the plot. There were occasional unexpected places, however, in which the unexpected placement of Queen’ hits was part of the show's fun.

Now that I’m done rocking out endlessly about the production design, let me rock out about the vocalists! Because … Wow.

Galileo's portrayer Cameron Nies delivered a smooth, beautiful rock voice consistently, all while spewing music reference after music reference within his dialogue. Nies was likable, fun, and gave just the right amount of energy to the character. Michaela Moore, as Scaramouche, boasted a voice that echoed and arrestingly radiated off the aforementioned miles of LED lights and TVs. One of my favorite We Will Rock You moments was her rendition of “Somebody To Love,” in which Moore's voice was incredible, and paired beautifully with her bold characterization. 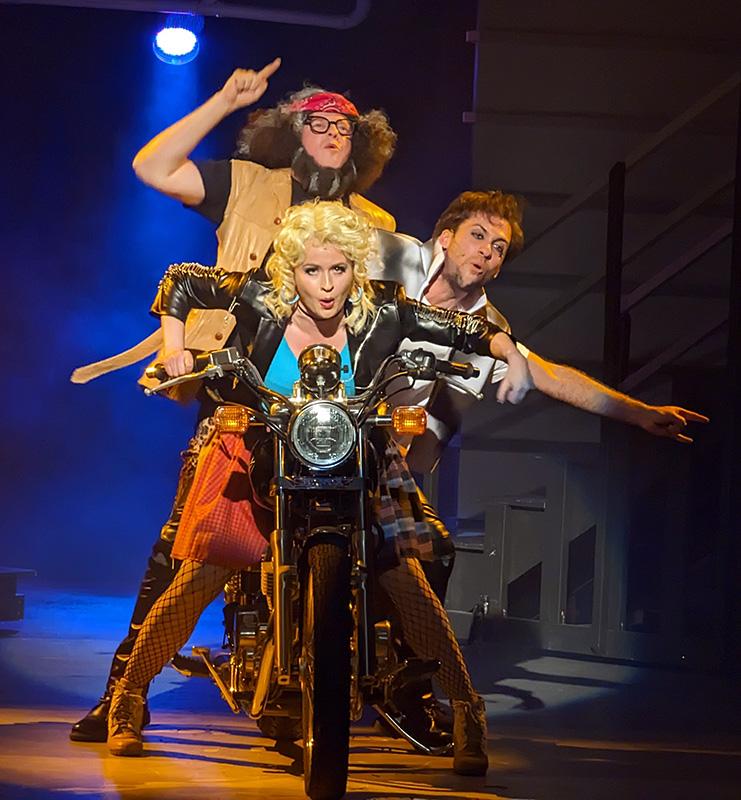 The show's villains Killer Queen and Khashoggi – a powerful duo respectively portrayed by Sarah Hayes and Marc Christopher – delivered some of the most entertaining songs of the night with “Another One Bites the Dust,” “Don’t Stop Me Now,” and “Fat Bottomed Girls,” all of them complete with killer fan-ography. And the Bohemians brought a lot of great life, and a different comedic flair, to this story.

Tristan Tapscott's Buddy, the leader and conspiracy theorist of the Bohemians, was a great joy to follow as the actor embraced the show's silliness, and his sweet, clean rendition of “Days of Our Lives” added great dynamics to his performance. Other Bohemians included Natalie Carrera's Oz and Bobby Becher's Brit, and Carrera boasted an incredible voice and played off Becher extremely well, with the duo especially entertaining in conversation. And Becher stood out wonderfully, taking his Brit to the extremes and embracing the story’s absurdism. Did he overdo it? A little bit. But it was glorious. One thing the We Will Rock You script has going for it is character, and all of the Bohemians were fun elements, from their one-liners to the absurdity of their names to their conspiracy plot.

Rounding out the cast is a stellar ensemble whose members played misfit Bohemians decked out in super-fun costumes reminiscent of various music icons, Radio Ga Ga girls, techno prison guards, and more. Through the liveliness of their performance – the solid dancing, the futuristic mannerisms – they added incredible energy to each scene, and the overall work the We Will Rock You team put into this production showed. It was visually incredible, and the staging and vocals were killer. Go see this for a night of impressive fun whose artists won't disappoint. They will rock you.

We Will Rock You runs at the Circa '21 Dinner Playhouse (1828 Third Avenue, Rock Island IL) through March 11, and more information and tickets are available by calling (309)786-7733 extension 2 and visiting Circa21.com.