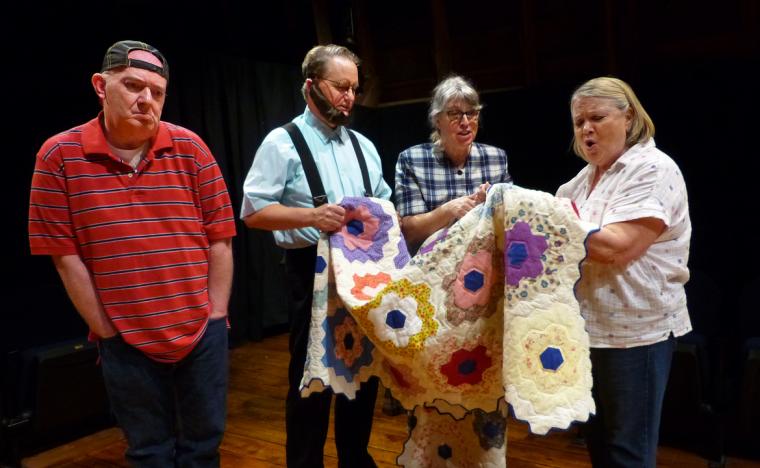 Leaving Iowa, the winning comedy currently running at the Richmond Hill Barn Theatre, follows Don (played by Kevin Babbitt), a middle-aged writer who reflects on vacations from his youth. In the play's present, Don travels across the cornfield states to spread his father’s ashes at his childhood home. And in a series of flashbacks, Don and his family find themselves in interesting situations with zany characters during their Midwest road trips.

As the house lights dimmed at the top of Thursday’s opening-night performance of authors Tim Clue's and Spike Manton's comedy, we heard “Holiday Road” (popularized by National Lampoon's Vacation films), which was a nice choice by sound designer Larry Lord that set the tone for the play’s events. Director Justin Raver's production then began with a minimized scenic piece: a car seen beneath a soft, center-stage spotlight, its pool of blue lit beautifully by designer Jennifer Kingry. And the vehicle – which, fittingly, was the focal point of the show – never left the stage.

This car was the driving image that steered the action of the play (pun intended), existing as a focal point in the flashbacks and in present day. It was also moved from the center of the stage to one of the corner entrances many times during the performance, with a shout-out to Rich Kobre for smoothly and expertly handling the scene transitions. However, it may have been just as effective to have the car in one corner of the stage throughout the show, as these transitions became a little distracting. In a similar vein, there were numerous scene shifts that didn't seem to match the lighting transitions. As Leaving Iowa is a memory play, more distinct segues would have aided in making it clear whether we were in the present day or in a flashback. Luckily, however, Raver's main quartet of performers do a wonderful job of making “Past or present?” distinctions through their acting choices alone. 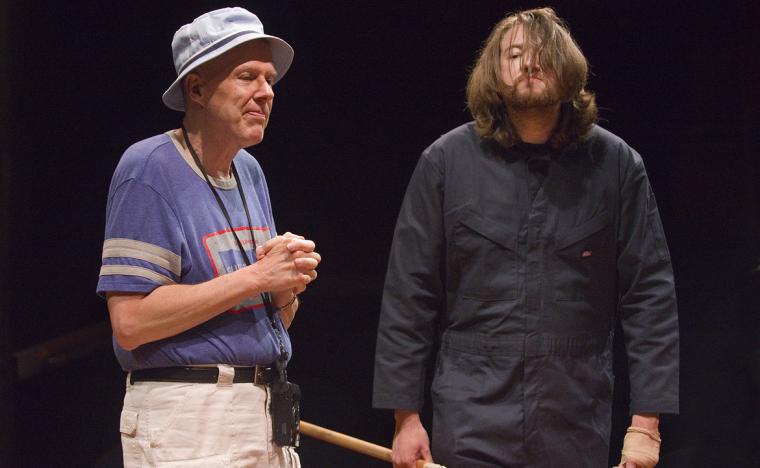 Babbitt, who almost never left the stage during the play's entirety, switched back and forth between Don's younger “kid self” and his present-day “adult self” by putting on and taking off a hat – a great, subtle costume choice. But Babbitt also crafted drastic vocal and physical character choices for each version of the role, and narrated this sprawling, fast-paced journey with ease. Leslie Day, who plays Sis, also went big when portraying the younger version of her character, throwing herself on the floor in a tantrum at least a few times during the performance. These youthful fits, along with the sibling arguments, childlike wonder, whining in the back seat of the car on the long road trip, et cetera, were enjoyable – and made even funnier because they were full-grown adults being parented by other full-grown adults.

Portraying Mom and Dad in Richmond Hill's production are Pam Kobre and Don Faust (the latter only appearing in the flashback scenes). This pair played the same roles in a different barn, having starred together in the Playcrafters Barn Theatre's Leaving Iowa in 2011. I can only speak on their work in this presentation – 11 years ago, I was only a 5th-grader not yet old enough to be a River Cities’ Reader reviewer – but the two actors’ back-and-forth banter on the road trip was especially fun to watch.

Faust captured multiple dimensions of “dad on a road trip,” providing a range of emotion from his short temper in the front car seat to his persistent determination to his excessive excitement for less-than impressive roadside attractions. He also played off the other performers very well, and created a believable and beloved Dad without overdoing it, while Kobre remained a calm, easygoing mother throughout most of the play. There were select times, however, in which the character lost her cool (mostly at the height of the kids’ backseat banter and during Dad’s driver’s-seat frustration), which demonstrated Kobre's excellent and comical range.

Filling out the rest of Leaving Iowa's 20-plus characters (among them some inanimate objects) is an ensemble of six. Overall, they did a nice job of switching between roles. However, a majority of these characters were all one-note, and considering that we see so many of them throughout, perhaps more variations in tone, inflection, and pacing would have dramatically separated the family of four from the zanier figures they meet on their trips. 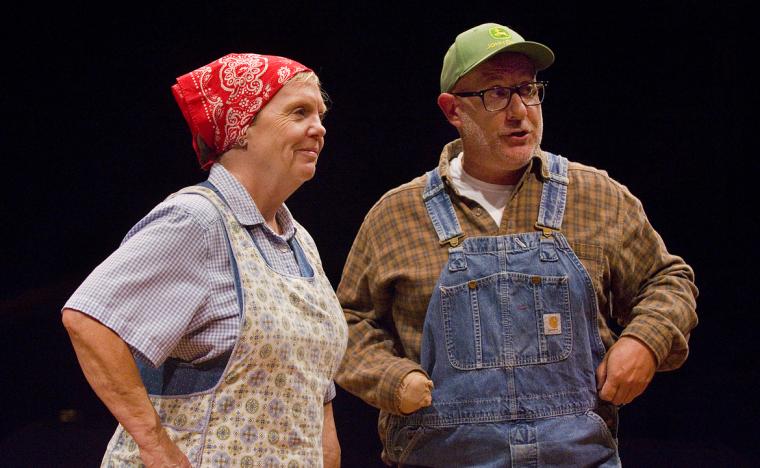 That being said, each actor did have some select stand-out portrayals:

Patrick Kelley played a cart chaser at a grocery-store parking lot built on a steep hill. You’ll have to see the show to understand why building a grocery store on a hill is not ideal.

Janet VanderSchaff played a hysterical drunk in a scene at a hotel. This characterization was arguably the production's most varied, and the performer's comic timing was subtle, but effective.

Kevin Keck played Don and Sis' grandfather, and there was a cleverly staged scene in which Grandpa and Grandma stood in the American Gothic pose, pitchfork and all – staring blankly ahead for a comically uncomfortable amount of time.

And last, but certainly not least, Matthew M. McConville gave agile portrayals of highway signs and billboards, in which he literally ran across the stage many times dressed in a head-to-toe camo. Great commitment to character (inanimate objects?), Mr. McConville!

Be sure to check out Richmond Hill’s production of Leaving Iowa for its touching moments, wild characters, and good laughs – and join Don and family for a final (holiday) road-trip vacation as the summer comes to a close.