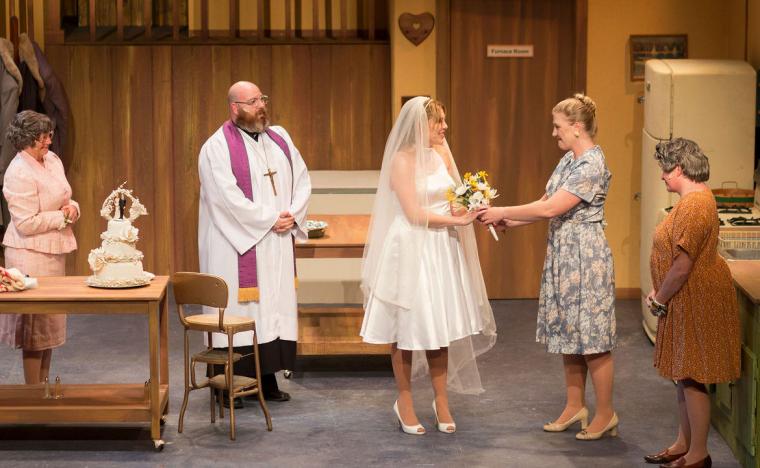 If you've been aware of local theatre within the last 15 years or so, you've probably heard of Church Basement Ladies. This 2005 show set in Minnesota in the mid-'60s – with its book by Jim Stowell and Jessica Zuehlke, and music and lyrics by Drew Jansen – has inspired such a ravenous fandom that there are now seven related musicals in this series. The Circa '21 Dinner Playhouse has produced some of them – one just this spring. Yet somehow, I'd so far escaped these ladies' clutches. I'm here to tell you I was clutched, but good, at Thursday's opening-night performance at the Clinton Area Showboat Theatre.

Many churches have basements, most swarming with ladies. But if the title baffles you, it's about the volunteers (often women) who organize the food-based church fundraisers and other social functions, and was inspired by the book Growing Up Lutheran: What Does This Mean? by Janet Letnes Martin and Suzann Johnson Nelson. The Showboat's former artistic director Jay Berkow directed this one, and alongside music director Harrison Roth, he and his cast and crew mixed, cooked, and served a tasty hotdish.

(A quick thanks to Heaven that the dish is not as hot as it might have been, as the Showboat's previously outdoor season moved indoors at the beginning of July. Between the performers' conservative Lutheran garb,requisite Minnesotan coats to ward off the scripted cold, and the actual temps in the 80s and 90s, I don't know how the cast could have managed even one scene without collapsing.) 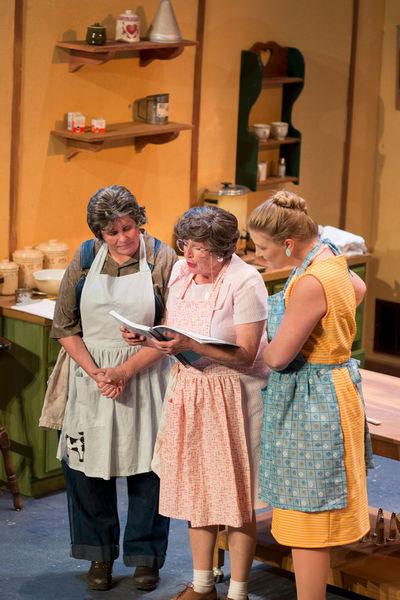 And hey – this wonderful cast! Autumn O'Ryan plays Mrs. Snustad, the opinionated matriarch of the squad. (She played the same role in Circa 21's recent The Church Basement Ladies in You Smell Barn.) Nancy Teerlinck is Mavis, who can fix just about anything. Lisa Crosby Wipperling portrays Karin, the best cook. Ava Schmidt plays Signe, Karin's college daughter, and a wild young thing compared to the rest. Phaul Fishman, meanwhile, is Pastor Gunderson, at times part of the hijinks here, and Fishman heightens some solo and lead musical moments with his fine voice.

One of Church Basement Ladies' most enjoyable scenes featured Mavis' charming, comical musings about "My Own Personal Island." Usually, I don't like "hilarious" songs about menopause, which, for me, are on par with snickering numbers about boners. (Low humor, cheap laughs – blech.) But Teerlinck made me chuckle about hot flashes! There's more fun when the ladies dramatize the decadent horrors of "The Cities" (Minneapolis-St. Paul), with only Mrs. Snustad in earnest; the others happily mock their holier-than-thou but oblivious commandant. Wipperling, who leads several numbers, has a lively presence and lovely voice. And almost every musical, no matter how comedic, has at least one earnest moment. Mrs. Snustad and Signe share one in "For Good," providing outstanding singing and tender, genuine acting.

Now, about the setting. There's a subculture in Minnesota, well seasoned by Norwegian immigrants, which has yielded a generation willing to poke fun at itself. My mom was actually born a Minnesota Lutheran, but the family moved when she was a baby, so my knowledge of this world came from several comedy sources powered by Minnesotans. (I bet you can name at least one.) All this is to say that I'm more familiar with the premise here than others might be – even if there were a few lines that had the crowd roaring but left me baffled. However, you don't have to understand everything to enjoy it – just let them explain. And they do, indoctrinating us into their world of extreme cold, farm injuries, and all the disgusting details of lutefisk (purportedly, an edible substance). 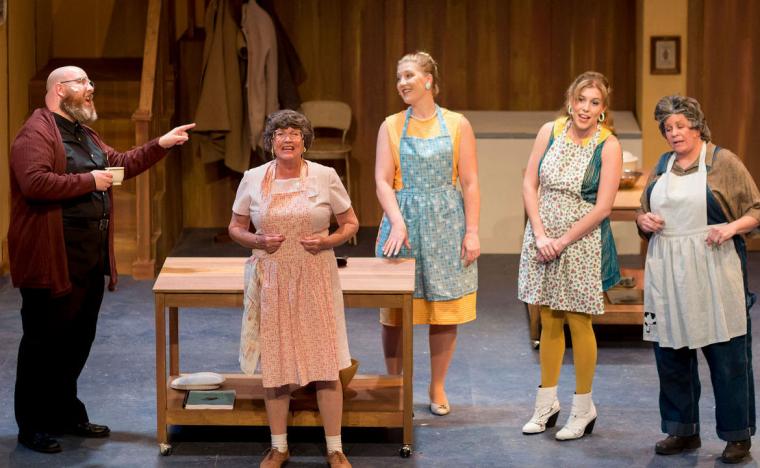 I have to say, though, that even if you only understood Bulgarian, this show would be well worth the ticket price for the music alone. Most of the songs bear the stamps of familiar musical-comedy and vaudeville tunes, but even though formulaic scores are also among my pet peeves, Berkow's company makes this one work. The prowess of the five performers is incredible; each has a mighty voice, and together they are out-of-this-world fantastic. (Composer Jansen and music director Roth are major contributors here; I could've listened to those harmonies all night.) And choreographer Luke James Cloherty adds much to the numbers by giving the ladies a wealth of Supremes-style movements that they perform with in-sync verve.

Not everything on Thursday went smoothly … and I think we all loved that it didn't. While the ladies were disparaging a meatless lasagne, about the third time someone said "ve-e-egertanarian," the actors lost it a little. There were no guffaws onstage, but smiling lips were bitten, a pause was taken, and the audience broke up in a delightful Conway/Korman sort of moment. Later – inexplicably, several minutes after a wall phone had last been touched – the receiver fell to the floor and Fishman's off-the-cuff quip got even more laughs. I didn't personally hear the ad lib, but a reliable source tells me it was "Put that on your list of things to fix, Mavis."

This Church Basement Ladies is a funny, tuneful tribute to those who serve their church in a singular type of community. You'll revel in the peculiarities you know, learn a little something, or both. (Is this where I say "Uff da"? No? Never mind, then.)