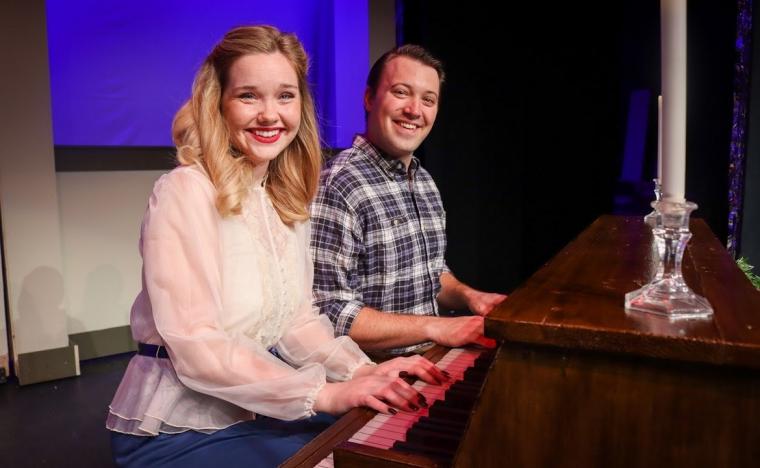 For whatever reason, my heart feels a tad Grinchy this season. Not in a “noise noise noise” kind of way, but in a “less is more” kind of way. However, there is nothing lesser about Quad City Music Guild’s production of Irving Berlin’s Holiday Inn; it’s about as close to over-the-top as it gets, with splashy big dance numbers, massive Christmas Trees, bonnets that would put the Kentucky Derby to shame, and even an overture that seemed overlong. (Admittedly, much to my husband’s chagrin, I find most overtures excessive.) Yet as it turns out, director Luke Vermiere’s Holiday Inn – which I attended on its final, Tuesday-night dress rehearsal – just may have been the dose of “Cindy Lou Who” that I needed to embrace the Christmas spirit, and perhaps this show's one-weekend run will do the same for you.

Set to all the Irving Berlin songs you already know and love, Holiday Inn doesn’t feature a complicated plot. When Jim Hardy (Tyler Henning) decides to give up life in show biz and settle down in Connecticut, he figures that his fiancée Lila (Susie Carsell-Schaechter) will be excited about the plan, as well. Funnily enough, Lila prefers show biz over farming, so she abandons him and his new house. When the bank starts sending collection notices, Jim has to find a way to make some money and the idea for a Holiday Inn forms: He will stage holiday shows and sell tickets! 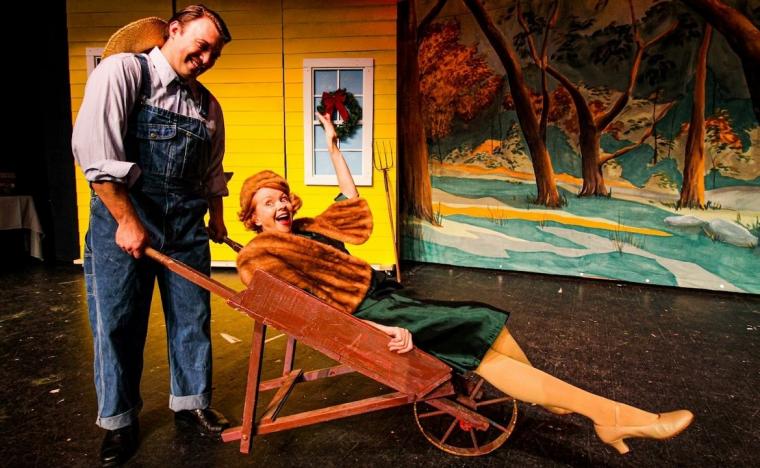 Now, if Henning wasn’t so likable, his character Jim would be absolutely infuriating. Hiding from the bank’s child messenger Charlie (the darling Peyton Beck) isn’t a plan for repayment. Neither is moping about whining how your best friend “steals” all your gals. Luckily, though, Jim is made more interesting by the people he surrounds himself with, among them his agent Danny (Mark Kulhavy), and especially his live-in, catch-all friend and employee Louise (Jess Fah). Louise is a hoot, and Fah rocks at her role. The true comic relief of the show, Louise is loyal and mischievous, traits that Fah executes beautifully. Her meddling also moves everything along plot-wise; without her, the story would just be a drumbeat of Jim and his “woe is me” lamentations, and now allow him to find personal growth and true love in Linda, played by the always-wonderful Lauren VanSpeybroeck.

While Jim and his best frenemy Ted (Daniel Williams) were at odds from nearly the moment the curtain went up, Williams himself was a pleasure to watch. A phenomenal dancer, he delightfully stole focus any time he appeared on stage. His broad, over-dramatic acting persona was hysterical, and kudos to him for letting me clearly hear every word he spoke. Though I understand completely, it is truly unfortunate that the cast is wearing masks throughout the performance – masks that, while keeping the cast safe, also muffle their vocal projection, making it quite difficult, at times, to hear almost all the performers. (They also hid many facial expressions.) I honestly don’t know how to solve that problem, but there it is. What could be solved, sound-wise, is how the pit sometimes overpowered the cast. It was curious to me that, as six ladies from the ensemble were on stage dancing, the person I frequently heard singing the clearest was an off-stage male. I typically love when Guild has even the off-stage ensemble singing during songs, but in these instances, I really wish I had heard the women a little more so their singing could match the on-stage visuals. 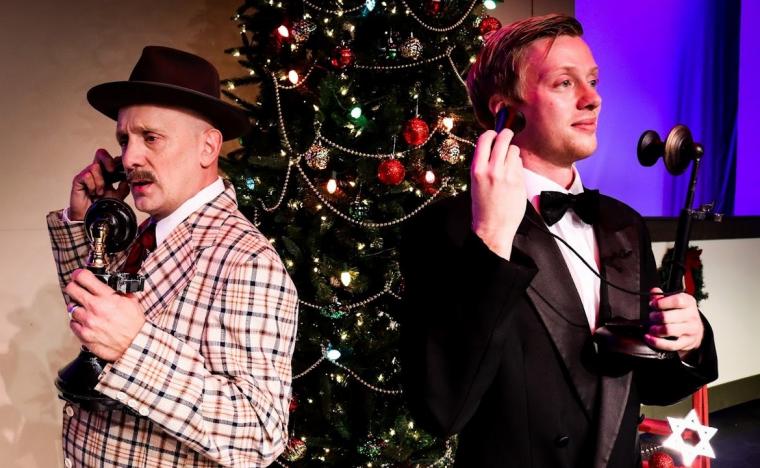 And what visuals there were. Vermiere’s ensemble – Megan Winchelle, Stephanie Truitt, Emily Brooks, Faith Hardacher-Meuser, Leslie Aboud, Izzy Bartscher, Lillian Fincher, Juliet Hunt, John Donald O’Shea, Jayne Baker, Joe Wren, Julia Hummel, and Alyssa Frazier – frequently showed up dancing, jumping rope, and appearing to have a ball. Shana Kulhavey’s choreography also packed a big punch. It would be difficult for me to commit to a favorite moment, but it might have to be “Shaking the Blues Away” number with scenic designer Andy Sederquist’s large inn decorated to the nines, and costume designer Joe Thomas’ attention to detail adding to the overall feeling of charm, whimsy, and Christmasy nostalgia. Fah’s trash-can-lid tap shoes are the type of things legends are made of. What a splendid treat!

Vermiere’s presentation wasn’t perfect during Tuesday’s dress rehearsal; there were a few notes that seemed out of range, the aforementioned sound issues, and, at moments, a general lack of polish. (During one scene, a water bottle was curiously left on stage.) But as it was a rehearsal, I’m just going to assume any wrinkles will be ironed out of the tablecloth, and the rest of the show, by the time they open. And because the holiday joy on display is so contagious, it won’t even matter if those things stay exactly the same all weekend. Contrary to the song's lyrics, sung beautifully by Henning and VanSpeybroeck, I would strongly prefer my own Christmas to not be white. But Holiday Inn was otherwise a delight, and fun enough to make my heart grow three sizes. Yule enjoy it!