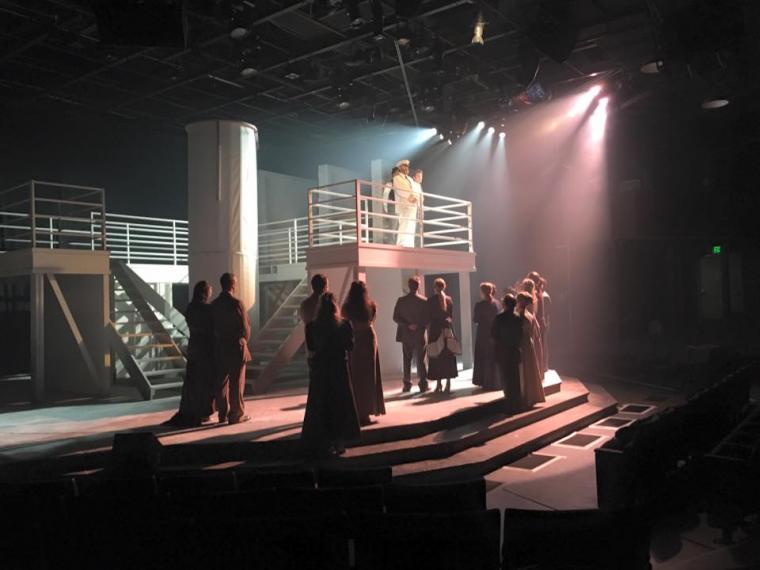 (SPOILER ALERT! The following may reveal details of the Timber Lake Playhouse's current production of the musical Titanic. Readers are advised to cease reading if they don't want to know how the story ends.)

Let's start with the obvious: The ship sinks. Secondly, there is no "King of the World!" moment on the bow with Leo and Kate wannabes. Finally, there is not one Celine Dion song in the entire production (thank God). In fact, this production has very little in common, other than its sinking ship, with its more well-known cinematic cousin directed by James Cameron.

Winner of the 1997 Tony Award for Best Musical, this Titanic is instead a haunting approach to the famous historical tragedy that invites the audience to explore the societal beehive of the early 20th Century through the portrayals of a stellar ensemble cast. Timber Lake's artistic director, James Beaudry, helms the ship's wheel, steering the high-energy cast through non-stop, intertwining relationships as they sail into the horizon toward the inevitable. Director Beaudry's vision keeps the bulkheads between classes very distinct until the big moment in which all of the on-board men, women, and children must face their collective mortality, realizing that socio-economic classes are nothing but barriers to the human experience.

At the very heart of this floating behemoth is the ship itself, designed by Arnel V. Sancianco. His vision creates a series of elevated platforms connected to the stage floor, with stairs and railings appropriately reminiscent of a vintage cruise liner. The genius of Sanciano's design allows for Timber Lake's giant turntable to rotate from scene to scene seamlessly while adding the simplest of props and set dressing to suggest a new deck or location on the ship. The entire set and stage is also painted in a ghostly white hue, providing a foggy and ethereal feel throughout the performance. Roy Brown breaks through the ice of the show's 22-member cast playing ship telegrapher Harold Bride with a great amount of vitality and hope. With nearly the entire script (its music and lyrics by Phantom's Maury Yeston) sung rather than spoken, Brown's pure and perfect vocals were a revelation each time he was featured.

Also breaking the surface was Alec Irion as Thomas Andrews, the designer and builder of the doomed vessel. Irion, along with Kieran McCabe (as Titanic owner J. Bruce Ismay) and Quad Cities stage veteran Pat Flaherty (as Captain E.J. Smith), brought near-panic to the radio room when pointing fingers and belting Act II's “The Blame.” Flaherty, in particular, lent the show his traditional performance strength by adding depths of character to his not-quite-over-the-hill skipper.

Caroline Kasay, as Kate McGowan, was a true ray of sunshine in the murky cold night of the North Atlantic; her spot-on Irish brogue and desire to find new love and new life in the New World were a joy each time she hit the stage. Additional highlights were Elya Faye Bottiger and Ross Shenker as Alice and Edgar Beane, a middle-aged married couple from Indianapolis. Bottinger's distinct voice and comedic timing reminded me of a young Kristin Chenoweth, and her need to rub elbows with the rich and famous could have been the model for any Real Housewives-esque reality show. Shenker's tired yet patient hardware-store proprietor, meanwhile, was a perfect juxtaposition – pragmatic, yet still heroic. For me, though, July 30's strongest performance was Andrew Sickel's, whose stoic first mate Murdoch – an experienced-enough man, but not one emotionally ready for his own command – was devastating. Watching Murdoch's calm and measured realization that he'd be accepting responsibility for the disaster was a lesson in watching a talented character actor contain, and then slowly release, the most torturous of emotions.

Book writer Peter Stone has, in Titanic, created a wonderful story that humanizes one of the greatest maritime tragedies in recorded history. In a Timber Lake press release, however, the show's orchestration is characterized as one of the “greatest musical scores ever written for theatre,” and yet upon leaving the venue, I could not recall one melody from the performance. But that, of course, is not the responsibility of the Timber Lake crew, who bring levels of grandeur and awe to this production equitable to the size and scope required by its title and story.

And besides: The score is only the tip of the proverbial iceberg. Titanic is a huge production accompanied by a cast that matches the ship's statuesque beauty with talent and passion. They deliver a warm breath of fresh air across the bow of this stunning adaptation.

Titanic runs at the Timber Lake Playhouse (8215 Black Oak Road, Mt. Carroll) through August 7, and more information and tickets are available by calling (815)244-2035 or visiting TimberLakePlayhouse.org.