One Show, New Show, Fun-All-Thru Show: “Seussical,” at the Circa '21 Dinner Playhouse through December 26 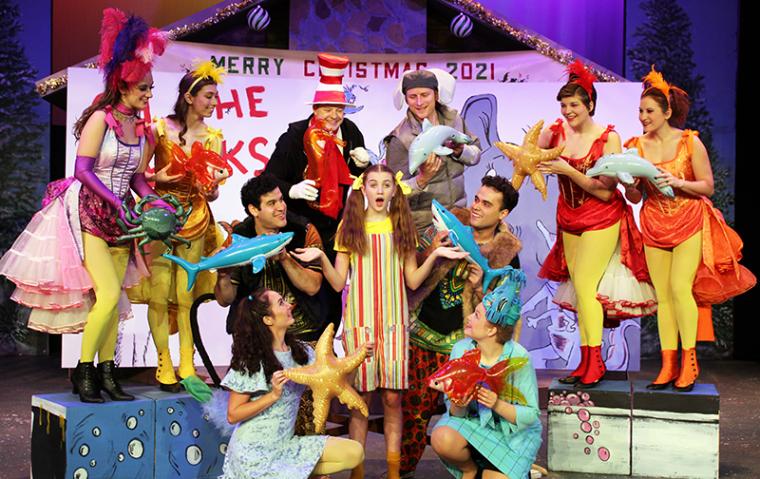 Seussical, with its lyrics by Lynn Ahrens, music by Stephen Flaherty, book  by both, and assistance by "co-conceiver" Eric Idle – and based on books by Theodor Geisel – debuted on Broadway in 2000, and the critics hated it. (Odd, as other musical-theatre adaptations by the duo, notably Ragtime and Anastasia, won multiple awards and nominations.) Anyway, Seussical has flourished in community theatres even without awards, and local productions have included either the full show or the one-act Seussical Jr. at the Clinton Area Showboat Theatre, Quad City Music Guild, St. Ambrose University, Augustana College with the Center for Living Arts, and Countryside Community Theatre.

Nevertheless, I hadn't seen the show before Saturday's afternoon performance at the Circa '21 Dinner Playhouse, when I discovered that this production is actually the one-act Seussical Jr. (I was glad, as the original script includes grim Butter Battle elements that I'd rather not watch.) With this version of the script, director/choreographer Ashley Becher, musical director Shelley Walljasper, and their cast and crew have concocted an entertaining, gratifying experience. 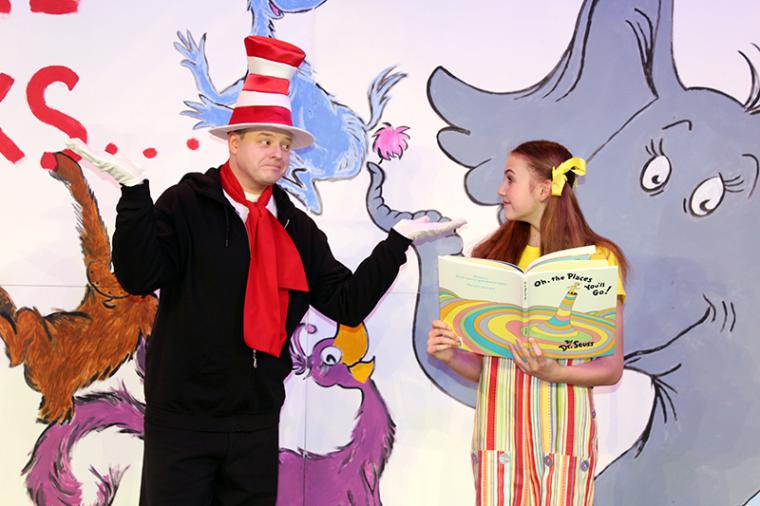 As usual here, many children's-show cast members are also in Circa '21's mainstage production, and I doff my (non-striped) hat to the performers employing double the brainpower and stamina to perform two shows. A particular striped, red-and-white topper comes to mind when you think about Seuss, and in this production, it's worn by local veteran Tristan Layne Tapscott as the Cat in the Hat. Tapscott is energetic, as all such Cats must be, and his lively facial expressions convey his contagious enthusiasm. Refreshingly, in this dramatic mash-up of Seuss' characters and plots, the Cat is not a destructive show-off as in his introductory book. Instead, he is a benign instigator and amiable co-conspirator, encouraging the Girl Who Thinks (portrayed by Ellerie Hurley) to let her imagination out to play. The talented Hurley was a delightful Lavender in Matilda: The Musical at Quad City Music Guild last summer, and is a wonderful addition to this professional cast.

Bobby Becher (the director's husband) plays an endearingly earnest Horton the Elephant, a much-abused soul who just wants to help others, no matter how small. Becher's demeanor and magnificent, expressive voice are a joy, but the whole cast is very strong vocally, in particular Megan Warren (the Sour Kangaroo) and Savannah Bay Strandin (Gertrude). Strandin's sweet Gertrude is a bird who lets others' comments about her looks get her down. She goes to a doctor to increase her assets, like Val from A Chorus Line did – but it works too well.

The wistful and beguiling "Solla Sollew" is about an idyllic, probably unreachable Shangri-la/over-the-rainbow land. With the lovely vocal blending and each singer gazing at their own particular vision of the ultimate happy place, it's the best song in this production. Unfortunately, the biggest flaw in this production is that the recorded musical accompaniment is often too loud, muffling the performers' wonderful voices. But the way scenic designer Susan Holgersson dressed the stage is perfect. Instead of spreading the set over the whole stage, she telescoped the scenic elements, which makes the presentation feel like a cozy storytime. (There's a practical reason for the design, too, as Seussical is played in front of the current, mainstage production Winter Wonderland's set and needs to be easy to put in place and strike.) I liked the sturdy cubes that the performers could stand on, sit on, or crouch behind, with different paintings on their facets, and cast members rotated them quickly to change settings. I've got a soft spot for low-tech. 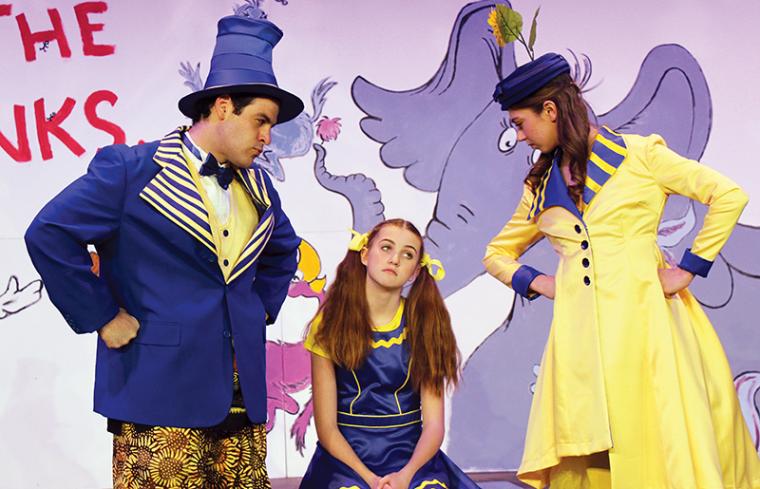 As is customary in Circa '21's children's-theatre productions, the actors double up on characters, so the ensemble includes everyone but Horton. (Even the Girl Who Thinks plays another part – JoJo – as facilitated by the Cat in the Hat). The simian Wickersham brothers (Evan Brody, Brad Hauskins, and Adam Sanders) had fun, crooked tails that the actors removed when not being monkeys, and these three versatile performers played a variety of roles. The delightful bird girls (Sydney Dexter, Sophie Killburg, and Kirsten Sindelar) flaunted their gorgeous, frilly tails throughout. Along with these various tails, costume designer Gregory Hiatt impressed me with the rest of his work, particularly the slightly off-kilter blue and yellow Who attire.

There is some disturbing stuff here. As noted in the opening song, “This ain't Mother Goose,” and poor Horton, in his mission to save the tiny Whos on their dust-speck world, is attacked by the media and the public, with the Wickershams and the Sour Kangaroo as his chief persecutors. Yet while I found their gospel-style shout about boiling the Whos chilling, it didn't approach my horror, as a kid, while watching the animated Wickershams chant "Boil that dust speck! Beezle-nut! Rah! Rah!" Give me the stage version instead!

Erica Lee Bigelow is excellent as Mayzie, the diva – and deadbeat mom – we love to hate. She mentions that a brief encounter with a fly-by-night charmer left her with an egg, which she then foists upon Horton. (If you attend the show with a child, her remark may lead to questions about the birds and the … . Well, the elephants.) And in Circa '21's Seussical, you're bound to see some creatures who are as thoughtless, selfish, and rude as anyone you encounter in real life. But thankfully, if we're lucky, the Hortons, Gertrudes, Cats, and JoJos can pick us up again and make life worthwhile.

Seussical runs at the Circa '21 Dinner Playhouse (1828 Third Avenue, Rock Island IL) through December 26, and more information and tickets are available by calling (309)786-7733 extension 2 or visiting Circa21.com.