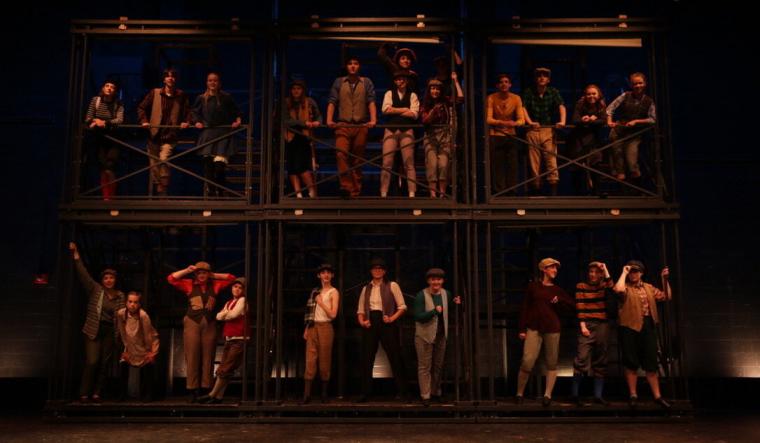 ensemble members in Newsies: The Musical

I remember the first time I sat down to watch Disney's Newsies: The Musical on a streaming service. As a big fan of the 1992 movie, I was shocked at the storyline changes that were made, and quickly took the stage version off my radar. But while Friday’s opening night for Countryside Community Theatre’s production of the show didn’t completely change my mind about the plot points (why is “Santa Fe” now the opening number?!), director/choreographer Ashley Mills Becher’s version packed big punches of fun and personality that made the night undeniably exciting.

Set in 1899 New York, where young newsboys find themselves barely surviving when the price of each newspaper is raised, Newsies: The Musical follows Jack Kelly (a strong and endearing Andrew Arevalo) and his band of ragtag newsies as they form a union and strike in protest. With a little help from independent newspaper reporter Katherine (the charming Sophia Kilburg) and Jack’s newest “business partners” Davey (wide-eyed Nickie Callender) and Les (adorable Ben Bergthold), the newsboys find strength in their numbers to take on Joseph Pulitzer (the powerful Christopher Tracy).

From the moment you step into the North Scott High School Fine Arts Auditorium, the set for Becher’s production takes your breath away. With the stage lit in purple hues courtesy of lighting designer Nicole Blodig, technical director Emmett Boedeker created a stunning New York skyline featuring multipurpose, moveable fire escapes. Becher leveraged these pieces incredibly well, focusing on fashioning interesting stage pictures to ensure everyone was given a chance to shine. The height of the set pieces made sight lines tremendous, and while I thought my seat in the theatre was a good one, I’m willing to bet no one missed a moment regardless of where they sat. 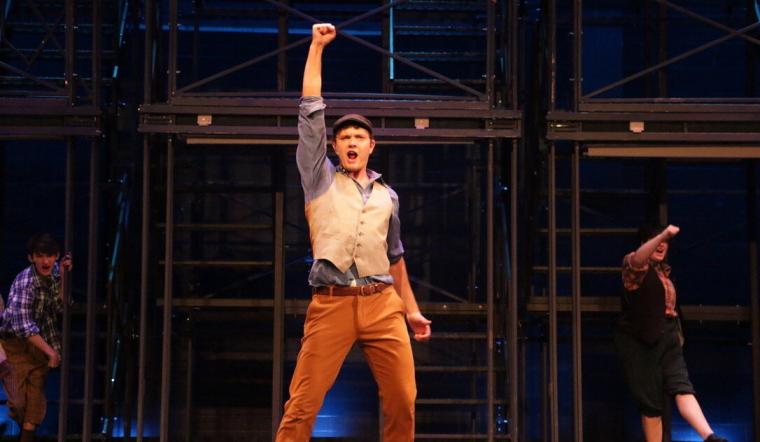 Once the hugely populated youth ensemble came out in full force with “Carrying the Banner,” I had goosebumps – partly because music director Chad Schmertmann had the performers singing well and the live pit orchestra rocking out seamlessly, and partly because Becher’s choreography was fresh, peppy, and all-around audience pleasing. Dance captain Jenna Lee Willet rose to her challenge beautifully, and was no doubt helped by the cast, who appeared thrilled to be telling this story. Arevalo brings enough star power to carry the show, but in this case, he didn’t have to: There was enough stage talent opposite him to make the production feel well-rounded. (My apologies to the nearly 30 newsies for not having enough space here to mention each individual by name!)

Costume designer Erin Emerle steamrolled my expectations, delivering brighter colors and cleaner newsboys than I could have thought possible. (Admittedly, when I think Newsies, I immediately picture neutral colors and an overall sense of “unwashed,” which is not at all what this version features.) An especially playful surprise was the Brooklyn crew showing up in red. Overall, this Newsies offers a super-feminine, contemporary flair that refreshingly works. Countryside is blessed with an extremely talented bunch; it just so happens a good chunk of them are girls. And while I found it a bit distracting to see some newsies in dresses with perfectly coiffed hair, Becher just rolled with it, so I willingly put on my suspension-of-disbelief hat and rolled alongside her. (During intermission, I did overhear people puzzled about who, exactly, Jack was in love with – debating between the super-sweet Marley Haley's Crutchie or Kilburg’s “writer girl” – but as someone familiar with the plot, I, myself, wasn't confused.)

Meanwhile, it wasn’t just the abundant youngsters who brought their collective charm in full force, as the production's adults, though small in number, collaboratively create a big stage presence. Almost every one of the grown-up cast members plays a multitude of characters with plenty of costume changes, and Becher's adult ensemble is a charismatic bunch, ably delivering some of the evening's best laugh-out-loud moments and most animated, enjoyable-to-watch facial expressions. 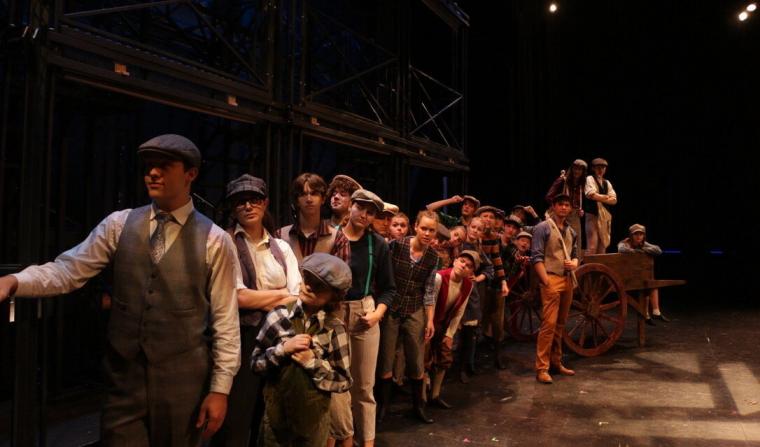 Unfortunately, Friday’s performance did have a few microphone issues, and while some of the on-stage talent was able to effortlessly power their way through the situation (here’s looking at you, Mr. Tracy!), others’ lines were regrettably lost to me. Thankfully, though, the show's overall message wasn’t lost in the audio distraction, and the large group numbers brought down the house without fail.

Overall, this particular production of Newsies easily superseded any expectations I had walking into the venue, and community theatre that creatively reflects the community is, in my book, always refreshing. With its large, enthusiastic ensemble and beautiful staging, this upbeat show is pleasing to watch, and comfy seats that provide epic sight lines are top ingredients on my personal recipe card for whipping up a winning evening of theatre. What’s not to like?