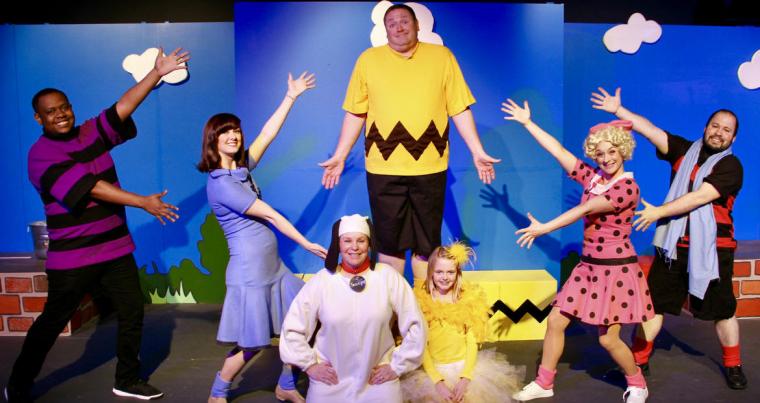 If you were at the Black Box Theatre’s opening-night presentation of You’re a Good Man, Charlie Brown, the question of precisely who stole the show shouldn’t be arguable. Terrific though they were, it wasn’t the riotously strident Becca Johnson, or Sara Tubbs and her wicked Kristin Chenoweth impersonation, or third-grader Makenna Miller in costumer Kris Castel’s Big-Bird-meets-Carol-Channing feathers – or any other members of directors David Miller’s and Gary Clark’s appealing cast. It was the grade-school attendees whose infectious laughs frequently punctuated images and gags, and made the show even more of a charmer than it already was.

Christopher Tracy’s Charlie Brown shoving his whole head into a mailbox was good for plenty of giggles, as was Adam Cunningham’s codependent terror whenever Linus was separated from his blanket. Nancy Teerlinck figuratively and literally shaking her tail as Snoopy was, as expected, a total kid-pleaser. And there was such vocal jubilation after Charlie Brown messed up his practiced Valentine’s Day greeting to Johnson’s Lucy that the happy cackles were practically their own punchline. As family musicals go, YAGMCB has always been an odd duck: a mostly peppy, candy-colored entertainment boasting child characters (and a canine) loaded with ennui and existential dread. But Miller’s and Clark’s production proves how pleasurable the results can be – and not just for young uns – when this material is performed with bright, beaming confidence. 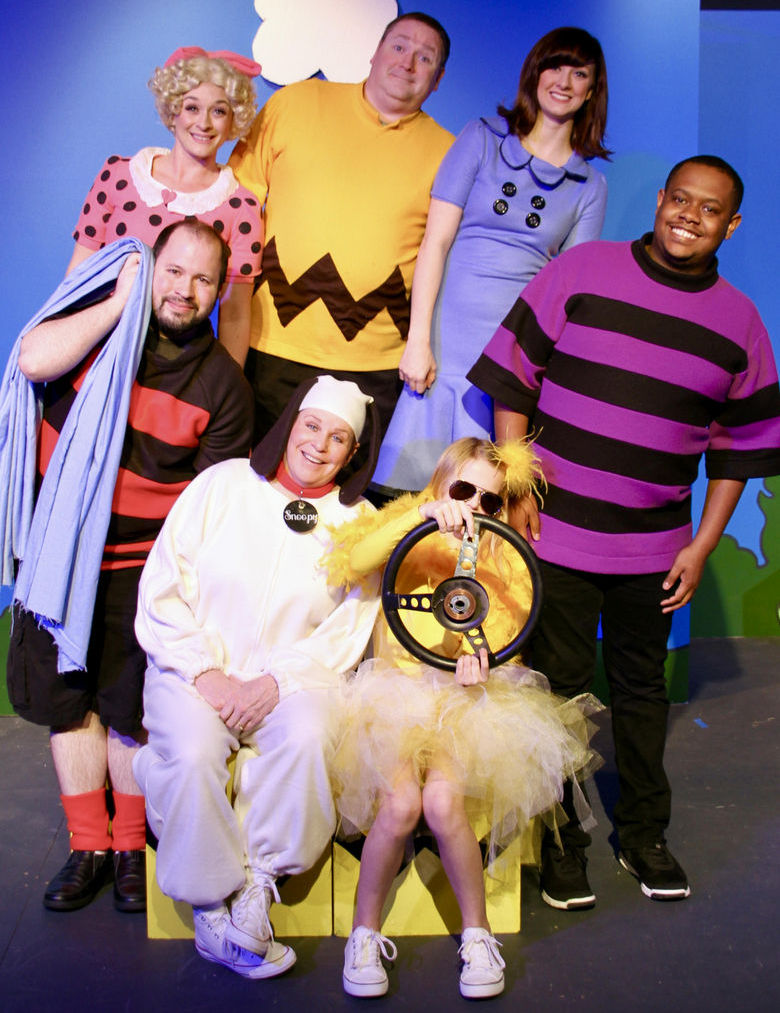 In most ways, the show is probably best suited for audiences of voting age who will immediately recognize that its structure as a series of comedic vignettes is modeled on – and sometimes takes its jokes directly from – Charles M. Schulz’s three-panel Peanuts classics. (This makes the Black Box an ideal venue for this musical; the long, moderately narrow space lends David Miller’s and Judy Matthis’ set design a true comic-strip flavor.) But grown-ups are also more likely to appreciate the clever, stalling lyricism of the “Book Report” song, and get the joke of Lucy’s tough-love psychiatric advice (“That’ll be five cents, please”), and admire the not-as-easy-as-it-may-look feat of adults embracing both their inner children and Schulz’s signature style.

Nowhere in the Black Box’s production is this embodied more fully than the early “Schroeder” number in which Keenen Wilson's Beethoven fanatic valiantly attempts to finish his etude while Lucy, desperate for his attention, leans with her back against his piano – just like in the comics – before finally lying down on top of it. (Poor Schroeder has to tickle the ivories on either side of her face just to get through the thing.) Between co-star/choreographer Johnson’s ear-splitting braying and Wilson’s gnawing irritation, their brief, hilarious sequence wholly captures the Schulz spirit. Yet it does so while also being generous to its actors, a double win equally apparent in bossy little Sally’s Broadway-baby rendition of “My Philosophy” (a miniature triumph for Tubbs), the comedic coup de grâce “Little Known Facts,” and Tracy’s touching, moon-faced, long-delayed happiness, and “Happiness,” right before the curtain call. 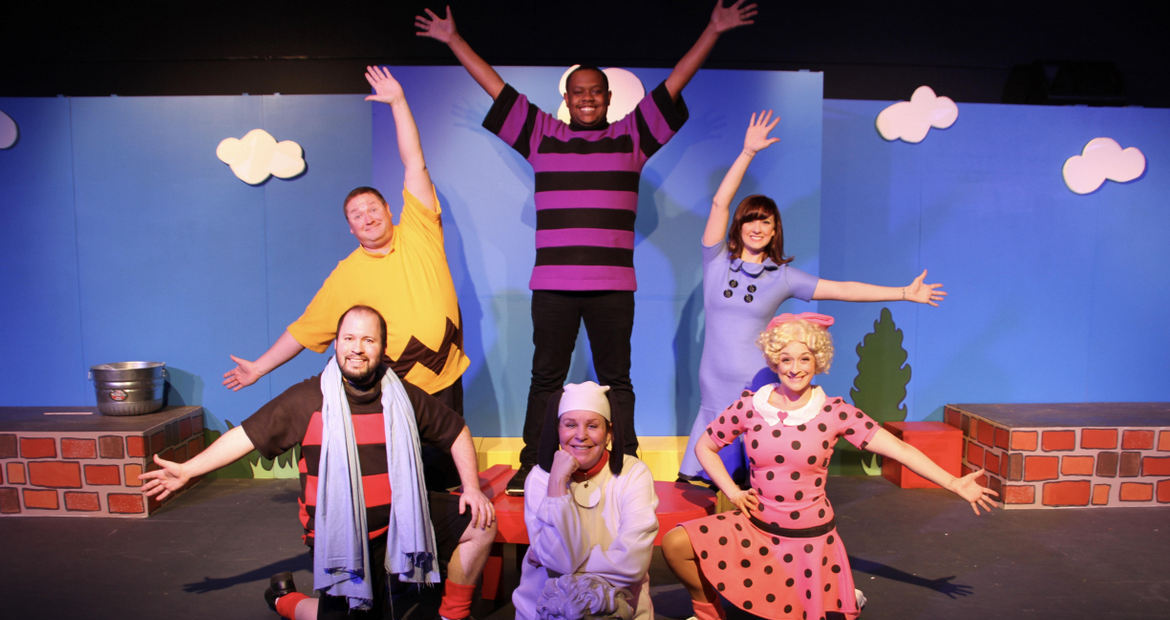 At the March 10 opener, there were certainly nits to be picked. With YAGMCB a series of blackout scenes, actual blackouts would’ve been preferable to the slow fades that followed routines – its structure already makes the show feel longer than its 100 minutes – and while designer Mike Turczynski’s hot-red lighting during fantasies was welcome, it was also confusing, as the effect instantly directed, and kept, our attention house-left when nothing but lighting was happening there. A mimed sandwich made no sense amidst the rest of the production’s oftentimes funny physical props (with kudos to Chelsea Edmark and Leah Miller for their procurement). Although the rare instances of vocal harmony were great during the Act I and II closers, the rest of the time ... not so much. And while Teerlinck, with her adorable howls and radiant smile, was a joy when Snoopy was in a good mood, she tended to fall into generic sour-puss mode when he wasn’t; the pup’s natural, haughty imperiousness, as envisioned by Schulz, instead came off as either total disinterest or abject hostility.

That said, among the show’s many pleasures, there was still Cunningham’s thumb-sucking sweetness, and the witty staging of “Glee Club Rehearsal,” and every single second with Woodstock – an addition to the script by portrayer Makenna Miller’s co-director dad. (Who says nepotism is inherently wrong?) Oh yes, and there’s a live band composed of Peter Letendre, Kyle Schneider, and music director Randin Letendre, which I mention not only because they played beautifully, but because until late in Act I, I didn’t even realize it was a live band; the unseen musicians were so spot-on that I initially thought the Black Box was using a pre-recorded CD of the show’s Broadway score. I subsequently learned that Randin had also been suffering from an illness on opening night that had her, shall we say, doubled-over for much of her time backstage. Way to go, Randin, and everyone, on such a fun, solid start to You’re a Good Man, Charlie Brown’s run, but still ... . Good grief!

You’re a Good Man, Charlie Brown runs at the Black Box Theatre (1623 Fifth Avenue, Moline) through March 25, and more information and tickets are available by calling (563)284-2350 or visiting TheBlackBoxTheatre.com.