Per Missive-ness: “The Christmas Letter Writing Club,” at the Playcrafters Barn Theatre through August 28 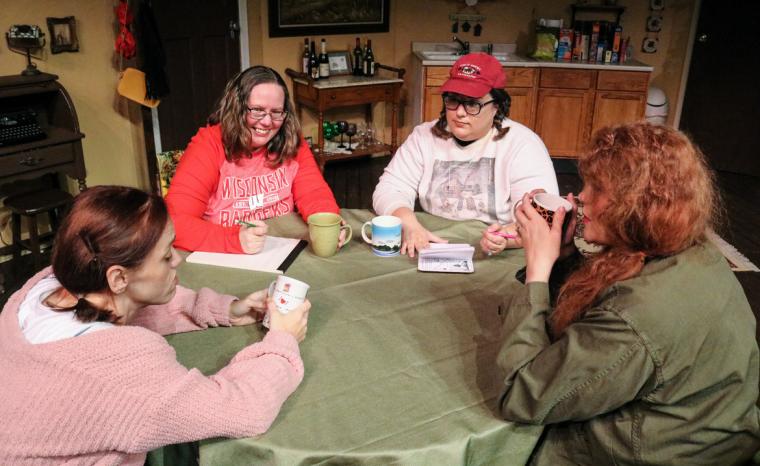 If you’re looking for a sentimental story that slowly sneaks up on you, might I suggest The Christmas Letter Writing Club at the Playcrafters Barn Theatre?

Director Madison Duling brings this new work, written by local playwright and actor Tom Akers, to life, its story following a group of college friends who gather at a cabin every October over a 20-year span to write their annual Christmas letters. From the moment I walked into the theatre, I was excited due to Eric Teeter and Bruce Duling’s sound design, which immediately brought me back in time. Having a few minutes to listen to some favorite throwback tunes while taking in the lovely set built by Zach Zelnio had me ready for some fun.

Zelnio also opens the show as the narrator Michael, and his soothing voice and calm demeanor brought me right into the play's cozy feeling and made me laugh out loud with his knee-patting “Welp,” because at that moment, he personified every Midwestern father. As we met the four women who make up the titular club, however, Akers’ script initially put me off. 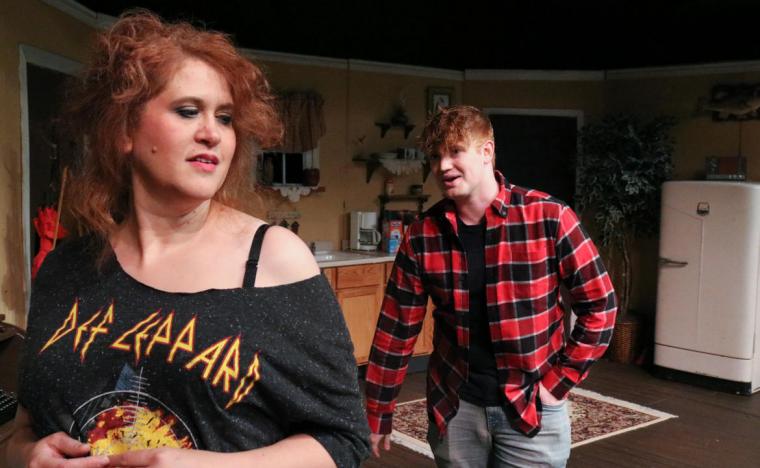 While it’s established that this crew had graduated three years ago from the University of Wisconsin, it turns out that all of the women are mothers, and two already have two young children waiting for them at home. And fine, that’s certainly possible, especially with a shotgun-wedding situation at play, and no judgment here on anyone’s reproductive timeline. What I found especially implausible was that not one of them verbally or physically expressed relief at having a weekend away to themselves. Sure, meeting friends they haven’t seen in a while is great. But to not change a diaper, find a mysterious spit-up stain on their shirt, or just relish the ability for a full night’s sleep didn’t make sense to me. (Some of these children must still be small infants – it’s the only way the timeline makes sense.) Yet they had no trouble at all whipping out the wine and toasting their stretch marks? Yeah … this was definitely a play about women – written by a man.

But that was just the first scene, and there was a lot more room for this script to grow. And it certainly did; over the course of the performance, the heart of Akers' story ultimately won me over. Sara Laufer’s Jenn was especially enthralling from the start, suggesting that not only is she the weekend’s host (she married into the cabin), but also the glue binding the Christmas Letter Writing Club friends together. For me, Jenn’s thoughtful consideration for everyone’s needs made her an early favorite.

Contrasting her was Elle Winchester’s Lisa. It was more difficult to understand where Lisa was coming from: She started off angsty and grumpy, and from my perspective, never managed to grow past whiny. Winchester certainly committed to what Lisa brought to the table; every friend group has a Negative Nelly who eats all the Doritos and makes questionable choices, and this club has Lisa. When Lisa follows caretaker Joe (the sweet Noah Striver) out into the night, you just nod your head and accept it for what it was: a questionable choice to forget her troubles. (There was next to no actual chemistry between Winchester and Striver, but it didn’t matter at all – the scenario required no emotional connection.) 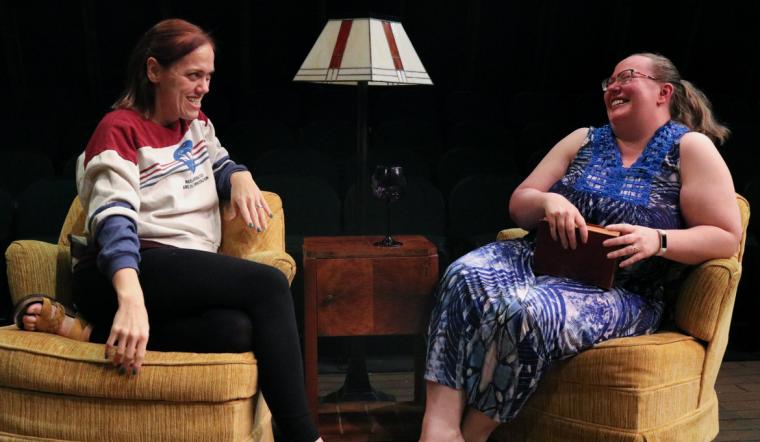 Admittedly, part of the fault for Lisa being so petulant lies with Akers’ script: We only see these ladies on four different occasions, and, while I feel he didn’t establish enough everyday reconnecting moments in these women’s lives, I appreciated the depth in the more difficult experiences he unfolded. I would have loved additional scenes in the first act (as intermission occurred before I was ready for one) to establish how much these women really mean to each other in a happier context. Yet because Act I went by so swiftly, I didn’t initially feel all that emotionally connected to these women.

But then Act II came and packed a big wallop. I did fine with the first two scenes – Allison’s situation was certainly rough, and her portrayer Jaclyn Marta conveyed that extremely well. It was Allison’s idea to write Christmas letters in the first place, and she brought a true motherly spirit as she checked in with each friend in small but tender ways. But I wasn’t expecting the final two scenes to knock my socks off the way they did. While revealing no spoilers here, I found myself relating to Mara Earp’s character Katie and her intense need to control as much of the situation as she possibly could. In fact, I related to each woman in varying degrees – together they’re quite a unit, and the actors’ bond and emotions were evident, leaving me a little teary.

As a new script, I imagine there’s more to flesh out with The Christmas Letter Writing Club. In fact, I unintentionally followed Duling and Akers down the steps, post-show, as they discussed what else they might add. While I hope to someday see a revised production of this work, it doesn’t change the fact that the current staging is done well. Like most annual Christmas letters, this version puts its best foot forward.

The Christmas Letter Writing Club runs at the Playcrafters Barn Theatre (4950 35th Avenue, Moline IL) through August 28, and more information and tickets are available by calling (309)762-0330 and visiting Playcrafters.com.