Pigment of Your Imagination: The Mississippi Bend Players' “Red,” at Augustana College through June 20 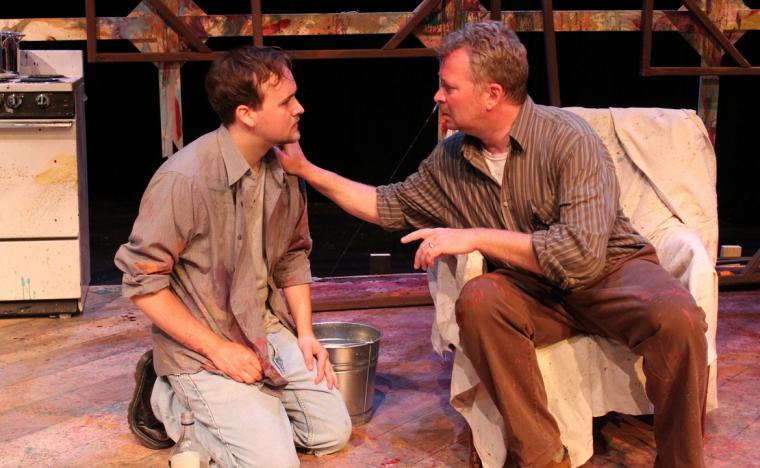 Art, in and of itself, is subjective. That's the beauty of it, actually. Where I see an intriguing work of art, someone else sees mere rectangles. So does it really matter what I thought about Wednesday's final dress rehearsal for the Mississippi Bend Players' Red? I feel confident in giving this show two thumbs up, but should you attend for yourself and disagree with me … . Well, I think that’s exactly the point of director Cait Bodenbender’s production: You can choose for yourself as long as you do so from a place of honesty.

Playwright John Logan's Red is an examination of art, and what exactly “art” means, shown through the eyes of famed visual artist Mark Rothko (Reader employee Mike Schulz) and his assistant Ken (Tristan Odenkirk). As the men grapple with the meanings of life and art, it becomes increasingly clear that challenging your perceptions can result in changing your ambitions and goals.

From the moment you step into the Brunner Theatre Center, Cameron L. Strandin’s scenic design is impressive. I suspect it was also enjoyable to decorate given that, being an artist’s studio, the required paint drips and splatters add charm and character. Strandin’s set essentially takes on the role of a third character in this two-man show and is nearly the only work of visual art we see throughout the performance. Strandin also serves as Red’s lighting designer, and I commend his restraint in not overdoing it with the titular hue; the resulting design is rather simplistic, yet beautiful. 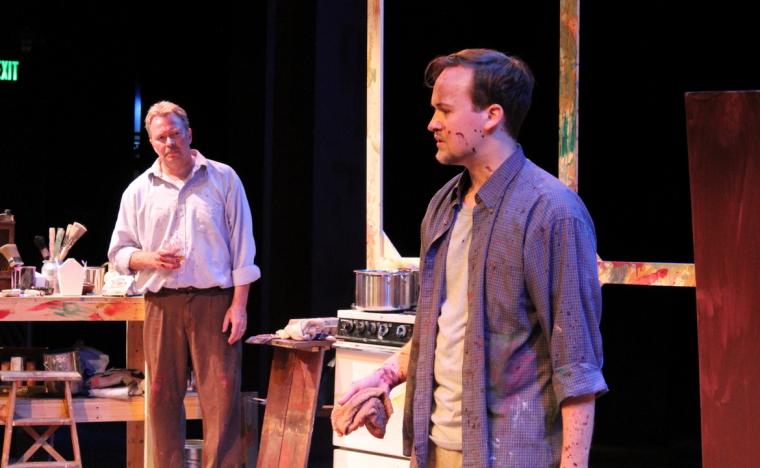 Technical achievements aside, in a play with only two actors, it can be difficult to know what to do with them in order to keep the show interesting. Bodenbender, however, didn’t seem to struggle. The moments of stillness alternated with movements ranging from purposeful to frantic, and the whole evening felt much closer to dance than I would have expected. During the first transition between scenes, the running crew of Trinity Filut, Megan Hoppe, and Roger Pavey Jr. worked so effortlessly and in-sync with the actors that I momentarily forgot the shift wasn’t driving the action forward and was simply a means to the next scene. While the rest of the transitions didn’t feel nearly as choreographed as the first, I found myself enthralled by them all the same.

Meanwhile, the running crew readied the stage for Schulz and Odenkirk to do their thing, and boy did the actors show up. Finding the balance between personal and performative could have been complicated, but you wouldn’t have known it from Schulz’s performance. Rothko was a complicated man, yet Schulz appeared to feel at ease imparting wisdom to Ken, and to the audience as a whole. What lessons will you take away from Red? It’s a big question because there are so many brilliant kernels of insight to be found in this production. (I almost wished I had a script in hand to follow, just to find out if Schulz's vocal emphases were decisions made with Bodenbender, or if the stressed words and phrases were clearly indicated by Logan.)

But the reason for all the artistic acumen being shared was Odenkirk’s Ken. (He's never referred to by name, so if you don’t use the QR Code to electronically view Red's program, just know the assistant’s name is Ken.) From the moment he appears, completely overdressed for painting, Ken is an enigma. Rothko is fairly straightforward in his tasks: paint, and stay relevant. Yet Ken, we gather, has more to gain from this assistant job, and Odenkirk’s natural charm plays beautifully into the role, allowing the character to appear at once comedic and heartbreaking. Odenkirk and Schulz play stunningly well off one another. Are they debating art or the meaning of life? There’s no appreciable difference: To Rothko, art is life, and vice versa. He simply chooses to express that view through pulsating color, apparently. 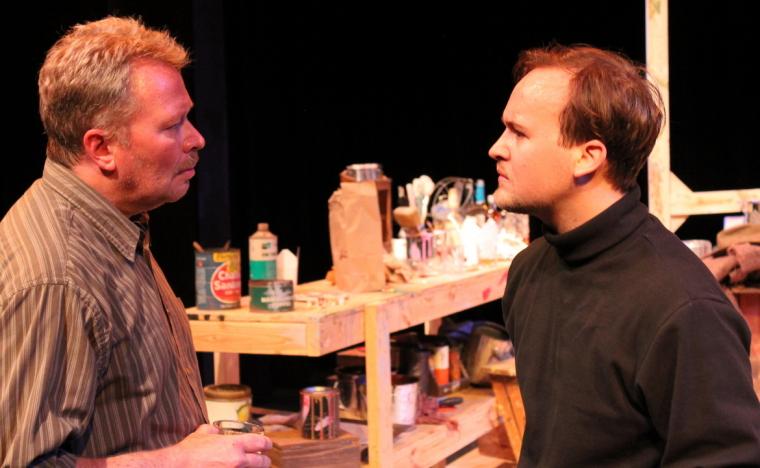 Red's stage action came to a captivating pinnacle when Schulz and Odenkirk worked together at a frenzied pace while Sammy Ramont’s sound design reached an epic crescendo; the whole sequence assaulted my senses. The music was loud, the visual fascinating, and a hint of the smell of fresh paint wafted across the theatre toward me. Then – rather accidentally, it seemed – Odenkirk’s pail of paint sloshed across the floor, creating the perfect metaphor for this production. That paint has likely permanently altered the set now, but the next audience won’t notice, because they won't know which splatter I’m talking about. For the next performance, it’s a reasonable assumption that one of the actors will spill a little more paint, and consequently create a separate experience.

No one will take away the same message from Red. We aren’t supposed to. This production will speak to every individual on a different level through an artistic medium meant for community enjoyment. That is a huge responsibility, and rather than shy away from it, the Mississippi Bend Players' season opener tackles the meaning of art head-on, allowing you the space to take from it what you will. With its brilliant staging and superb acting, Red is a deep dive into the importance of art and should not be missed.