Play Boys / Bunny: “'Jacques'alope,” at the Mockingbird on Main through November 13 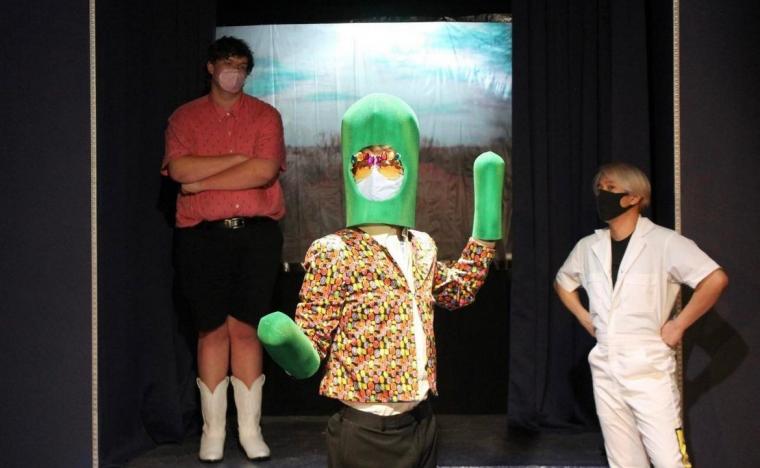 But new actors? Happily, no. I don't mean that they're old – they're experienced, and delightful to watch.

Before I get into the "Jacques"alope deets, a bit about the venue. The Mockingbird on Main is across from the Davenport Public Library on Main Street. Currently, scaffolding prevents a clear view of the place at night, but if you're lucky like I was, a sketchy-sounding character will be hovering in the doorway to entice – I mean invite – you in. (Just kidding about the "sketchy.") Inside are a few rows of chairs, interspersed with round tables where you can set your pop and chips, for such are sold before the show. It's a snug space, and masks are required for audience members. On opening night, when I attended, one of the actors was selling tickets as other performers roamed around. The homey "let's put on a show in the barn" atmosphere tickled me.

But this is no countrified barn hootenanny – this show is decidedly professional, and executed well. "Jacques"alope is an original play in both senses of that word, as it's a new work being performed for the first time, and it is inventive. Co-playwrights and -directors Vo and Green play Johnny and Fungus, respectively – a couple of pals on a road trip through the desert, and if there's any part of the play that's predictable, it's that a trek though the desert is Bound to Go Wrong. But where would we be if everything went smoothly? Fungus and Johnny would be at Burning Man, a huge, substance-infused, clothing-optional, creative/destructive/cathartic free-for-all (and in case you've never heard of it, this event exists in the real world). The actual adventure Fate was moving them toward is stranger still.

Green and Vo make a wonderful, befuddled pair, fit together well, and, having also written them, have clearly worked hard on their roles. The rest of the ensemble performs multiple parts (with the exception of T.J.'s father Terry Green, who makes a fun cameo appearance). Some of these folks are St. Ambrose students or grads, which pleases my theatrical Ambrosian heart. Sarah Goodall and Max Robnett play the proprietors of a mom-and-pop shop, Mom Shop and Pop Shop, who compel – okay, blackmail – Johnny and Fungus to start their quest to find the terrifying "Jacques"alope: a violent, antlered bunny who enjoys shindigs in the wilderness. 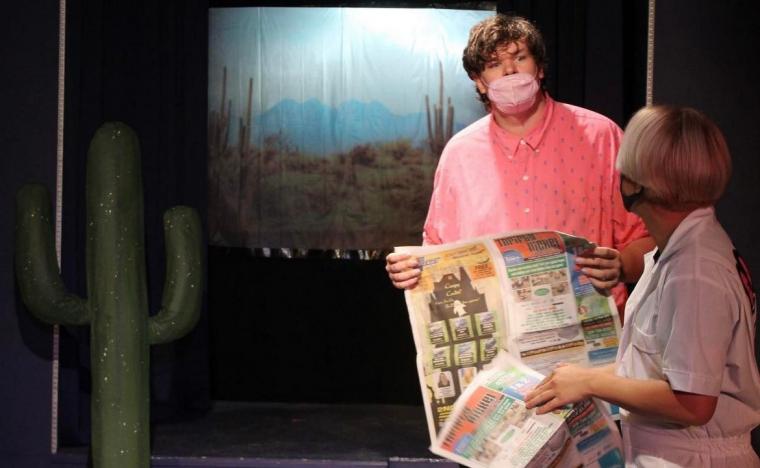 David Weaver performs this beast with a very convincing physical manifestation of rabbit-hood (Weaver's French accent is remarkably good), and later, he takes on the amusing persona of an unconventional rancher. Joseph Lasher heralds the entrance of his primary character with a startlingly gorgeous bit of song, while Isaac Smith takes on more roles than anyone else, and does them all well. Happily, the performances were not too overblown in an attempt to enhance the comedic chaos. Many of the actors' choices were precise and natural, and I'd expect no less, as I've seen some of these folks before. Green, Lasher, and Vo were in the Playcrafters Barn Theatre's Avenue Q, and Goodall, Green, Lasher, and Weaver were in The Little Prince at St. Ambrose University, both shows produced in 2019.

Composer and musician Riley Carizey adds a lot to the action playing keyboard and guitar, notably a nifty little musical sting whenever "Jacques"alope's name is spoken. And the show's technical aspects were effective; on Thursday night, everything ran smoothly. Becky Meissen designed the set, with scene changes largely accomplished by the cast, and I especially liked the clever construction of Johnny and Fungus' van. Rear projections helped set the scenes – Vo designed them, and Amanda Murray ran them – and Vo also designed the sound. Costume designer Juliette Carizey, meanwhile, did well in providing everyone with multiple outfits. Having reviewed two Patsy Cline retrospectives this summer, I've seen some fetching cowpoke ensembles involving hats, boots, short skirts, and fringe. I didn't imagine I'd enjoy another one this year, but Thursday proved me wrong. Lasher's getup was additionally noteworthy. He also moved well in it, despite its constraints.

The well-paced "Jacques"alope includes intermittent streams of hilarious dialogue, and like Skynet or a monkey with a mirror, the show itself is self-aware. Like a good comedy sketch, it takes unexpected turns. And like a fur-lined teacup, it is absurd. I admit that I was dreading an abundance of weird-for-weirdness'-sake, but I didn't detect even a breath of that onstage. (In the program? Maybe a hint.) I couldn't anticipate the unusual characters and happenings, but there was a flow, and the show's characters seemed naturally strange. I like to laugh. (Who doesn't?) But even if something is funny to me, I rarely actually laugh out loud. This show had me laughing aloud with my voice – just like the kids say online with their LAWMVs. The Mockingbird's latest is innovative stuff. See this show. Arrive early to get a good parking spot on the street and claim a seat. Let Haus of Ruckus surprise you.

“Jacques”alope runs at the Mockingbird on Main (320 North Main Street, Davenport IA) through November 13, and more information and tickets are available by visiting TheMockingbirdOnMain.com.