Play “Mist”-y for Me: “Murder at Mistwell Manor,” at the Mockingbird on Main through April 16 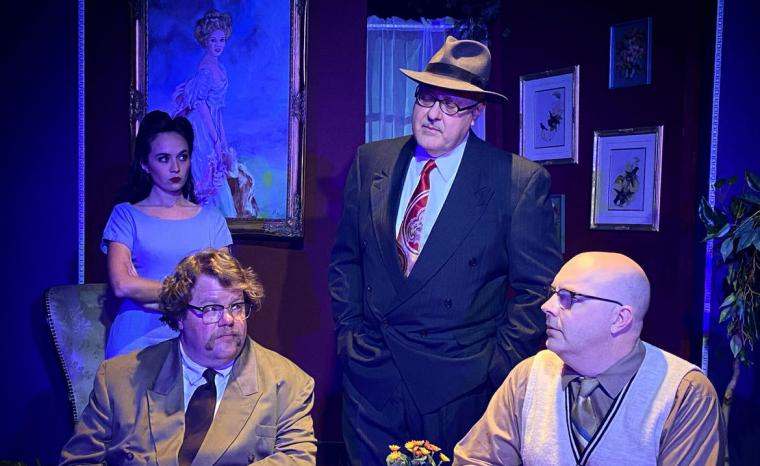 When I arrived at the Mockingbird on Main for Friday's opening-night performance of Murder at Mistwell Manor, I was instantly impressed by the beautiful scenic design. As I sat down waiting for the show to begin, I admired all of the small details and thought put into the varying visual elements that transported me to a cozy, 1950s-era manor. The set was decorated with numerous plants, fancy chairs, paintings, a projected flickering window light, and a couple of escape room-adjacent surprises.

Projection designer Doug Kutzli's flickering window effect along the back wall of the thrust stage, in particular, was a nice touch. It was accompanied, however, by a thunderous sound effect that played a little too frequently, and its sound quality seemed a bit off. Overall, though, the show offered gorgeous production design that, paired with the period costumes, perfectly fit the intimate Mockingbird venue.

As co-designers of the set, Tristan Tapscott and Savannah Bay Strandin had numerous other roles in this production: with both of them being the venue's co-owners/producers, Tapscott also directed and wrote the show, and Strandin acted in the four-person cast. Also serving additional roles was Douglas Kutzli, who acted and served as associate producer, sound designer, and projections designer, and beyond the cast members, a small, mighty team successfully made this theatrical debut happen. 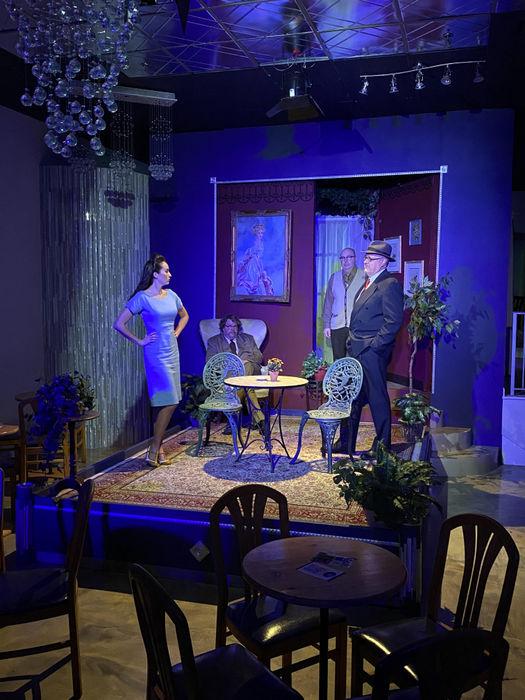 This hour-long original production begins in the middle of a stormy night in, according to the program notes, a “quaint aging manor in Oak Glen, California, just outside Los Angeles.” Mistwell Manor's action begins with Detective Roy Walters (Douglas Kutzli) jumping right into the murder case. Three suspects are with him in the house: Hollywood star Helen Havoc (Strandin), Dr. Jonathan Brooks (Jeremy Littlejohn), and the manor's owner and keeper Milton Blair (Eric Teeter). There are also unseen dead bodies – the real stars of the show – and a compelling surprise character that appears during one of many plot twists. As the play progresses, more evidence surfaces, the story becomes more complex, and the audience and suspects alike learn that none of the characters can be trusted.

Beyond its production design, the script itself leaned into the '50s murder-mystery style, and was carried well by its actors. With a bit of monotone, a lot of critical thinking, and a continual asking of “Why?” in true Sherlock Holmes fashion, Kutzli’s Detective Walters led the action, committing himself to the stock detective trope. For her part, Strandin captured a Hollywood star with a big ego. Being a film actress, the character previously played many genre roles, which added a fun layer to the story as Havoc frequently references how exciting it was to portray a murderer. Littlejohn’s performance was mysteriously crafted, and he nailed a commanding performance at varying levels in the plot. (He also rocked a handlebar mustache, which was quite fitting for his character.) Rounding out the quartet of whodunit characters, Teeter’s timid manor owner worked well with the various other personalities against a wild plot.

While the script could have used some polishing, I applaud Tapscott and company for boldly making original work – a brave thing to do in today’s commercialized era, and an overall successful attempt. Personally, I would have liked more comedic spoofiness – but that might just be a personal preference, having just come out of a production of The 39 Steps that took spoofiness to the extreme. Personal feelings aside, there were a couple of moments here that I felt could use some re-working. Although a full Shakespearean monologue was recited, its meaning didn't fit well within the context of the scene, and there was also a little too much “telling” versus “showing” throughout the action … a choice that, admittedly, probably helped keep the story simple and moving along. 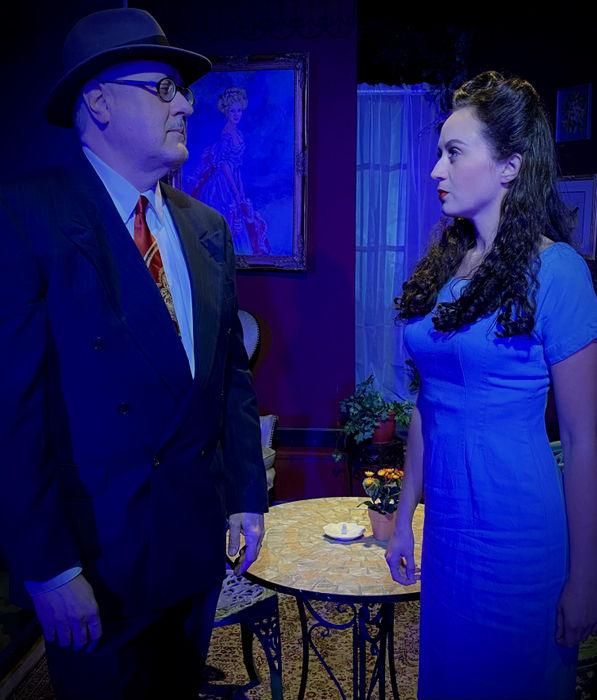 I couldn't tell if Mistwell Manor’s script was attempting to be satiric, mind-bendingly mysterious, or tear-your-'50s-pompadour-hair-out scary – but its subtle mix of all three possibilities created a laid-back, enjoyable production that matched the old mystery style well, regardless of the intended outcome. Spoilers aside, the last portion of the play was full of twists, surprises, and old-Hollywood-style plot devices – and the feeling of not knowing what was to happen next was exciting and ridiculously entertaining. Just as I thought the mystery was resolved, another twist came (then another, then another), and that was quite enjoyable to experience, especially given the intimate space, small cast, and relatively simple play. Tapscott’s work is a commendable piece that its mighty cast of four clearly made their own, and that the actors seemed to have an absolutely fun time putting together.

If you'e looking for a relaxing, easy-to-watch play, I encourage you to head out to the Mockingbird on Main to see this fresh, visually impressive work of theatre. And keep your eyes open as you observe the beautiful production design and many plot twists jam-packed into Murder in Mistwell Manor's hour-long presentation.

Murder at Mistwell Manor runs at the Mockingbird on Main (320 North Main Street, Davenport IA) through April 16, and more information and tickets are available by visiting TheMockingbirdOnMain.com.