Pseudolus Erronius Hilarious: "A Funny Thing Happened on the Way to the Forum," at the Timber Lake Playhouse through July 23 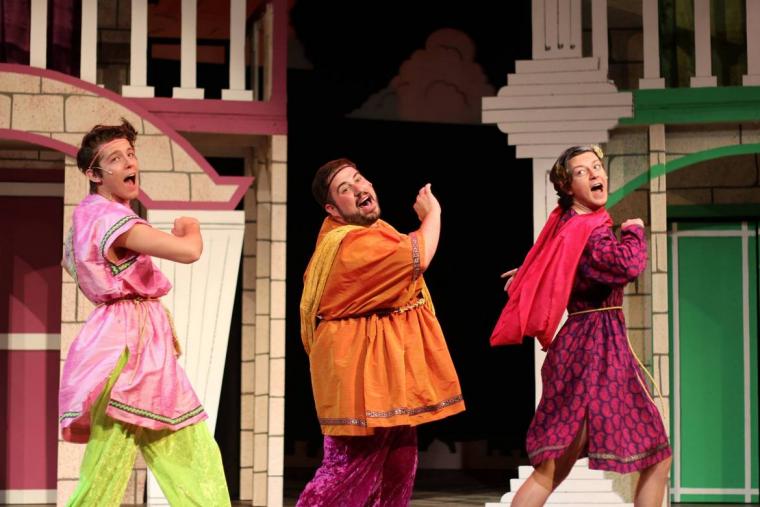 Tyler Klingbiel, Tommy Bullington, and Kieran McCabe in A Funny Thing Happened on the Way to the Forum

When actor Tommy Bullington walked on-stage for the Timber Lake Playhouse’s opening-night presentation of A Funny Thing Happened on the Way to the Forum, his arrival as narrator Pseudolus was met with a smattering of applause. He acknowledged the greeting and smiled, and the moment the clapping ceased, his smile faded, and Bullington took a perfect micro-pause before saying, “No, I liked it.” Cue the laugh, a bigger ovation, and the star flashing a wide, open-mouthed grin, curtsy-bowing like Maria Callas after performing Tosca at the Met. That, folks, is how you make an entrance.

July 14’s off-the-cuff prelude may not have made much sense to those who unfortunately missed Bullington’s outrageous, moving portrayal of Edna Turnblad in the theatre’s 2015 Hairspray. Clearly, though, that wasn’t the case for the majority of patrons, given the conspiratorial chuckle following Pseudolus’ remark “A man in women’s clothes – did you ever think you’d see that at Timber Lake?!” (Beneath our laughter, he delightedly exclaimed, “You know my work!”) And even those who missed Hairspray will likely be among the first to applaud the next time they see Forum’s lead on-stage, because in composer/lyricist Stephen Sondheim’s Roman-farce send-up, Bullington gives the kind of madly inspired musical-comedy turn that, much like his Edna, you’re pretty sure you’ll never forget.

The role of Pseudolus – a Roman slave who’ll be granted freedom if he ensures the marriage of the über-earnest Hero and sub-brainy Philia – has been played on Broadway by Zero Mostel (who also starred in the 1966 Forum movie), Phil Silvers, and Nathan Lane, all of whom consequently won Tony Awards. Like those performers, Bullington is a brash whirlwind of personality, equally confident whether storming through the lyrically juicy “Comedy Tonight” or faking a violently exaggerated death. Yet for an actor who is, shall we say, quite solidly built, he’s incredibly light on his feet, both figuratively and literally. Pseudolus’ wisecracks, as written by book writers Larry Gelbart and Burt Shevelove, are a blend of guffaws and (intentional) groans, and even when they’re not that great, Bullington sells punchlines and songs with force and precision. He’s also, however, such an effortless comic that he frequently scores laughs just by throwing his accent on the “wrong” word of a sentence, or letting sentences trail off into the ether, or momentarily dropping character to address others – including, sometimes, us – with an unexpected “Can we just cut the crap?” directness. Through the whole of Thursday’s show, Bullington’s line readings were consistently unpredictable, and he was just as inventive physically as he was vocally and facially, moving with the big-man nimbleness of a James Corden, or Charles Durning in his big Best Little Whorehouse in Texas number. I loved Bullington here. Were this Manhattan and not Mt. Carroll, Pseudolus might’ve netted his fourth Tony.

As for the production itself, director/choreographer Zachary L. Gray’s spirited outing would’ve no doubt contended for plenty of other awards, not least for the costumes by designer Kenan Burchette, who bypasses white togas – aside from those worn by Hero and Philia – in favor of joyously colorful, skirted ensembles suggesting the latest in plush, high-end pajamas. (Burchette’s courtesan designs, meanwhile, are crazy-sexy, making it even funnier when Jenia Head’s Vibrata unleashes a wild-animal growl, Olivia Kaufmann’s Tintinabula expresses pissiness via miniature cymbals, and Shayla Brielle G.’s Gymnasia glowers with “hands off” sovereignty.) Similarly vibrant, if more purely functional, are Riley Wood’s lighting effects and Tucker Topel’s scenic design, the latter boasting a trio of color-coordinated, two-story Roman edifices with first-floor doors that allow for maximum slapstick swinging. And while, unlike in June’s Having Our Say and numerous other Timber Lake productions, the Forum set doesn’t rotate, Gray’s cast finds ample opportunities to keep you, and themselves, happily dizzy.

Dizziest of all may be the virgin courtesan-in-training Philia, whom Elya Faye Bottiger plays as an addled sweetheart whose heart is as full as her head is empty. Reviewing the season-opener Gypsy, I wrote that Bottiger seemed to be channeling Singin’ in the Rain’s Lina Lamont for her squawking stripper Tessie Tura. I meant it as praise and still do, even though, having now seen Forum, that might just be how Bottiger herself talks; Philia is more dreamy than Tessie, but again sounds like someone just coming off a major helium high. Regardless, Bottiger’s expressively cartoonish voice as Philia is as sensational as her singing and comic timing (all three qualities marvelously showcased on Sondheim’s “Lovely” duet), and she’s beautifully partnered with Chandler Smith, who’s as sweetly, dopily innocent here as he was lovably metal-headed in Timber Lake’s Rock of Ages. While conductor/keyboardist Cindy Blanc’s three-person band composed of herself, Andrew Milliken, and Korey Steil played Sondheim’s score with gusto, this Forum wasn’t completely faultless. Its shenanigans involving the chorus figure Proteans (Matthew Salvatore, Levi Skoog, and Luke Stewart) were perhaps funnier on paper than in practice – even if it was funny, kind of, that Salvatore’s “eunuch” giggling was much louder than the combined soprano titters of twinned courtesans Annalise Griswold and Caroline Kasay. Although Gray’s staging was mostly topnotch, particularly in the escalating enjoyment of “Everybody Ought to Have a Maid,” Act II’s climactic, hellzapoppin’ chase, replete with swinging doors and all manner of mistaken identities, felt encumbered by performers having to cover too much collective space, and by the distracting lack of musical underscoring. (If Sondheim didn’t supply any, couldn’t the Benny Hill theme have worked its way in?) And try though he obviously did, Tyler Klingbiel, on Thursday, was far too sane as the hypochondriac slave Hysterium, despite his amiable mugging and more-than-passing resemblance to a young Ryan Reynolds.

But if Klingbiel isn’t (yet) a natural comedian of a Tommy Bullington caliber, continued A Funny Thing Happened on the Way to the Forum performances might help him get there, given that he’s damn near surrounded by them. Cody Jolly is uproarious as the old coot Erronius who routinely stops the show with his indescribably eccentric old-man gait and lascivious leer. Ken Singleton’s thrillingly egocentric Miles Gloriosus is like Beauty & the Beast’s Gaston, albeit a Gaston scared of heights and prone to weeping fits. Alec Irion, with a deliriously inappropriate Bronx accent as Roman pimp Marcus Lycus, routinely gets laughs out of lines that have no laughs. And as Kieran McCabe’s Senex hides from shrewish wife Domina (the vivacious Halli Morgan, whose heavily made-up eyelids look like they weigh five pounds apiece), the actor is wonderfully, dryly hysterical, playing a defeated codger who sees for himself, blindly and dumbly, one last chance at romantic bliss. “Something smells divine,” McCabe says after Senex’s bath, right before shouting, “and it’s ME!!!” Actually, it might be the show that he’s smelling.

A Funny Thing Happened on the Way to the Forum runs at the Timber Lake Playhouse (8215 Black Oak Road, Mt. Carroll) through July 23, and more information and tickets are available by calling (815)244-2035 or visiting TimberLakePlayhouse.org.