Radio Holy Night: ”Deck the Halls: A Holiday Musical,” at The Mockingbird on Main through December 18 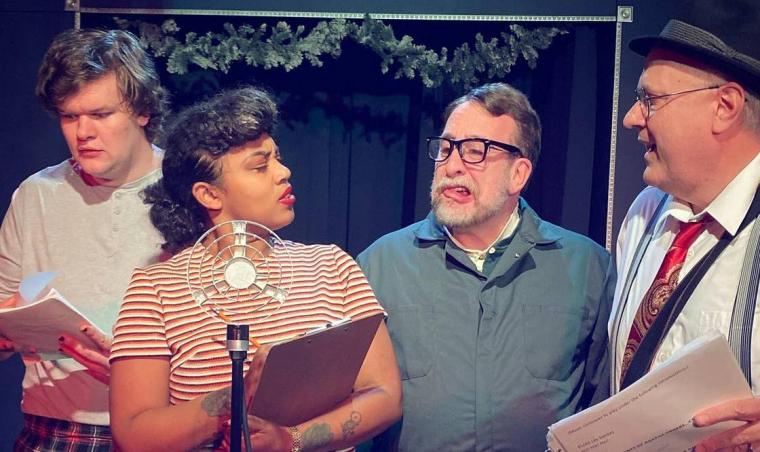 We’re going to go ahead and blame the crazy December thunderstorm for there being so few people attending Friday night’s opening of Deck the Halls: A Holiday Musical at the Mockingbird on Main. And by “few,” I mean me. (A fact I was going to leave out until the theatre itself called attention to this detail on its socials.)

But the heavy rain has to be the culprit, because once word gets out about how delightful this production is, it should be difficult to snag a seat. I know the holidays are busy and holiday weekends busier still, but make room in your calendar for this fast-paced, hilarious little show, because it's completely worth it. The energy that director Tristan Tapscott’s cast brought to a very nearly empty house was unbelievable, and I can only imagine what the show would amount to in a packed theatre.

This original holiday musical, also written by Tapscott, is fairly simple in concept: It’s 1953, it's Christmas, and there’s a snowstorm trapping a few random radio-station employees at work. But the phrase “the show must go on” is cliché for a reason: not having a professional cast is not an excuse for the radio station to not go live on the air. So the four snowed-in staffers collaborate to deliver the spirit of Christmas over the airwaves. 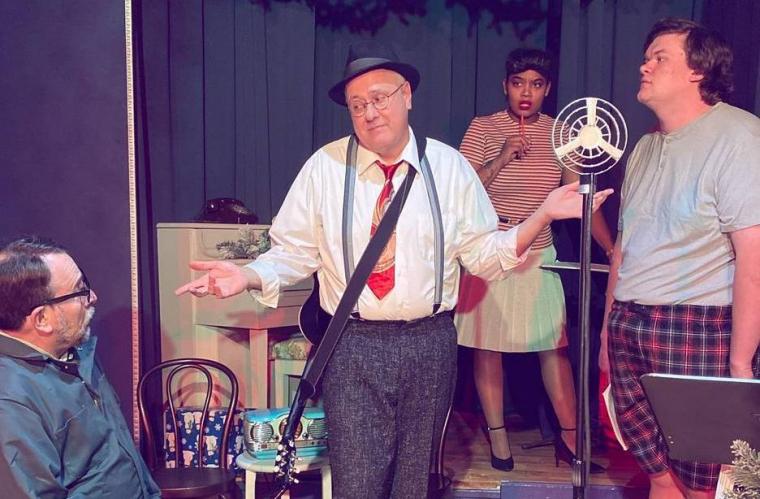 The first time I laughed out loud was when Douglas Kutzli’s character Doc (the scriptwriter) was singing (not surprisingly, given the show’s title, “Deck the Halls”) with the station’s lovable janitor Elias (Gary Talsky). What made this exchange especially comical was the duo’s side commentary, and throughout the evening, many moments made me laugh. I'll admit, I’m not unusually an audience member who laughs a ton – I recognize you can’t hear smiles – but man, Deck the Halls just completely blew me away and had me audibly laughing more than a few times. Kutzli was in charge of the musical accompaniment from the stage, via his guitar, and he did a marvelous job. Talsky’s expressive face and fun voices, meanwhile, made the “radio show” extra lovely – he has an especially fantastic Santa voice that's familiar but not overdone.

While Kira Rangel’s Loretta may have been reluctant to get in front of the microphone, I am grateful Rangel herself didn’t share that sentiment, because the girl can sing. No matter which classic Christmas tune she was rocking, I loved every second. As the radio station’s assistant producer, Loretta was the only character truly stressed out to begin the unplanned show and luckily, she found a modicum of chill by the end. The spontaneously cobbled-together show may not have been the best radio show the station ever had, but in no way could it have been the worst.

When it comes to T.J. Green’s time on stage, I couldn’t tell you which I found funnier: his weather reports or his “'Twas the Night Before Christmas,” but suffice it to say no matter which character Green was meant to vocally emulate, he was fully committed and didn’t miss a mark. Deck the Halls' foursome played remarkably well off of each other, building an energy that swelled throughout the space. They were clearly having such a good time, and consequently, so was I. My favorite moment of the whole show had to be the rendition of “A Christmas Carol.” No disrespect to Dickens, of course, but Tapscott and crew hit on the best (if not precisely the most accurate) retelling I’ve ever experienced. 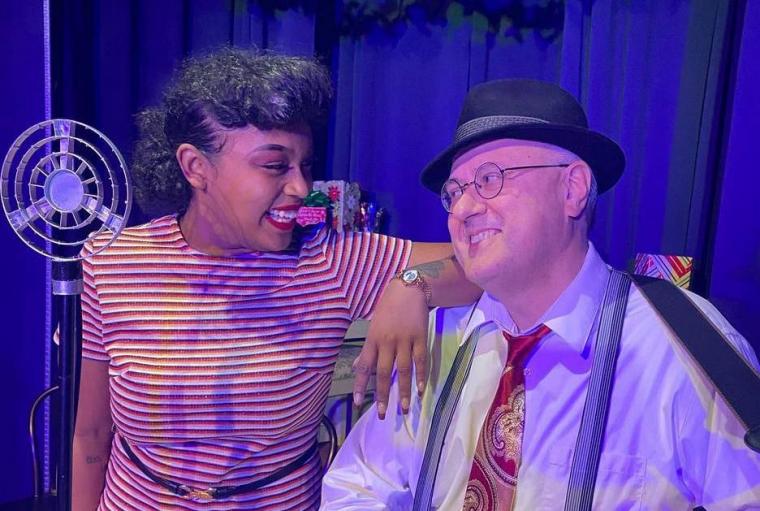 Tapscott made the excellent staging choice to use Mockingbird’s cozy stage to its fullest. The way it was set up felt Christmas-y and old-timey, and it made perfect sense for the stage to be a small recording studio; the sometimes cramped feeling only heightened the characters' evident panic. I cannot believe how well Rangel ran in her heels, especially when she hustled up the stairs, and it was a particularly awesome choice to pretty much leave Kutzli in one place and let the other three actors battle it out for the microphones. I imagine, from time to time, the “can’t catch a breath” exhaustion was less acting than it was reality, given that Green, Rangel, and Talsky were very much up, down, and all around.

There are no real surprises to Deck the Halls: A Holiday Musical. It’s just a quick, witty show full of classic tunes you probably enjoy, some of them updated with new arrangements. (Remember: It’s 1953, so Mariah Carey hasn't been born and the gentlemen of Wham! haven’t given their hearts to anyone yet.) I’ve already given Rangel props for her musical prowess, but let’s just extend that to the cast as a whole, because this show is straight-up pure enjoyment and I thoroughly appreciated every minute. If you need a laugh-out-loud show with a heaping helping of Christmas happy, Mockingbird on Main’s newest production is for you. I unapologetically loved it and I could not recommend it more. So rearrange your schedule, if you have to, and go see this yuletide treasure.

Deck the Halls: A Holiday Musical runs at the Mockingbird on Main (320 North Main Street, Davenport IA) through December 18, and more information and tickets are available by visiting TheMockingbirdOnMain.com.