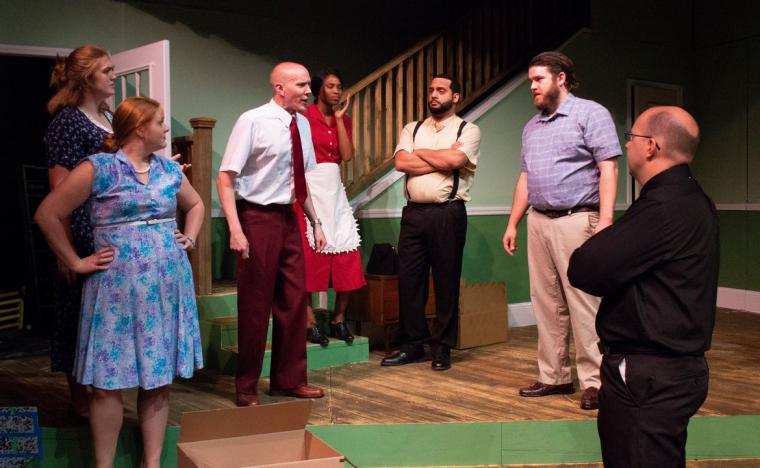 It’s not often that I walk away from a show thinking about who I am as a person and how I can do better. Yet that is exactly what happened Friday night after the Playcrafters Barn Theatre's production of Clybourne Park, and director Alexander Richardson should be proud of his thought-provoking, darkly comedic production that demands more of its audience than the usual area-stage fare.

In the first act, it’s 1959, and Bev (Cynthia Safford) and Russ (Mike Turczynski) have sold their house, having only two days left before they move. While they're visited by their local minister Jim (Eric A. Teeter), however, their neighbors arrive, concerned that the new owners of the house are black, and tempers flare. In playwright Bruce Norris’ spin-off of sorts, you see, the action takes place before and after the actions of Lorraine Hansberry’s classic A Raisin in the Sun.

Much of this production’s activity stems from seemingly pointless conversations that establish tension in the air, and as the origins of the word “Neopolitan” and the capital of Morocco are fiercely debated, it’s the subtext that reigns supreme. With her excellent facial expressions, Safford was especially strong in these moments, and her reactions to what was said by others spoke volumes. I found it especially interesting that, in both of these situations, we saw a man correcting a female. When Clybourne Park premiered in 2009, “mansplaining,” as a word, was just barely emerging, but its employment here speaks to the complexity of a story that gives its audience so many societal issues to focus on. 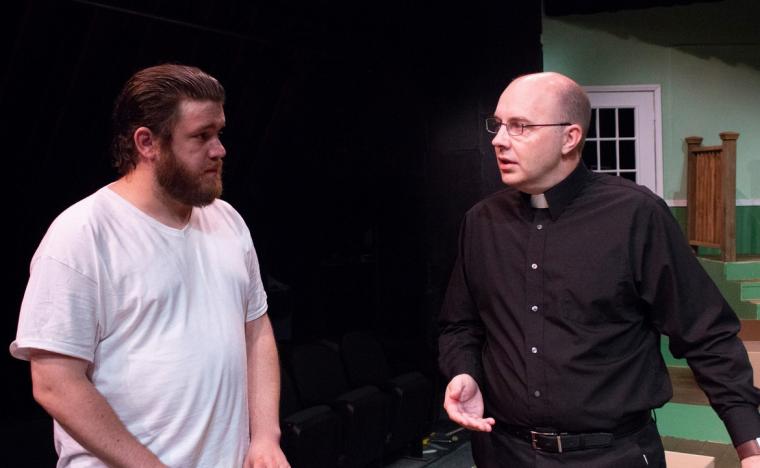 Richardson's production features vast subtleties, including the soft-spoken deliveries of Teeter’s Jim. On Friday, some of what Teeter said was lost to the sound of the raging thunderstorm on the Barn's roof, but it was clearly a character choice that underscored Jim's meekness, and wasn't indicative of Teeter's ability to project. (As we learn in the second act, the actor can be quite forceful.) Jim is not Clybourne Park’s villain, but as he talked to Russ, Turczynski began to seethe with anger, so it felt like an honest choice to turn to strong language over violence – and I, personally, felt as if Jim had it coming. The language didn’t seem at all superfluous. In fact, it seemed almost necessary.

Entering this already-tense situation are Karl (Jesse Mohr) and his wife Betsy (Angelique Morgan), the latter of whom is deaf. Mohr was excellent at making Karl unlikable in an honest way, and Morgan was wonderful at performing hearing-impairment – how she kept a straight face during one of Turczynski’s comedic outbursts, one that happened at her expense, I could not tell you, but our audience was roaring.

Scenic designer Emma Brutman fashioned a set that was a very convincing house with brick foundation that ran all around the stage, adding to the idea that we were getting a true peek inside that house. Was it perfect? No. (There were some cosmetic issues, to be sure.) However, I'm so glad I didn't step out during intermission, because watching the house transform from a loved little bungalow into an about-to-be-demolished space that still holds a lot of history was fascinating. So was listening to Micah Bernas’ spot-on sound design. As intermission began, we heard hits from 1959, but then Frank Sinatra’s “Come Fly With Me” suddenly transformed into a remix, so by intermission’s end, we were firmly segued into 2009. 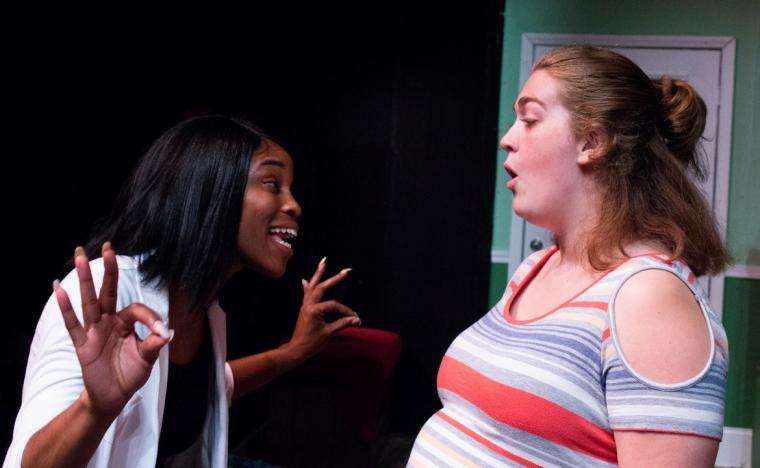 As the second act begins, Richardson's cast have taken over their second roles in the show, and everything shifts. Now, Steve (Mohr) and Lindsey (Morgan) are planning to buy the Clybourne Park house to demolish it and rebuild, on a larger scale, in the now-gentrifying community. What should be a cordial meeting to discuss housing codes with their lawyers (Safford and Teeter) and housing-association members Lena (Victrese Jones) and Kevin (Kyle Taylor), however, turns into a massive argument about racism and offensiveness.

Whereas the staging in Act I, with its purposeful action, was excellent, the play's second half occasionally felt stagnant. It's really Lena running the show, and unfortunately, from my perspective, Jones sat with her back to me for the majority of the act, and I missed all of her reactions. Jones, however, was not afraid to let loose, and her jokes' punchlines hit like smacks across the face. Meanwhile, Mohr, whose Steve never quite figured out where the line was between offensive and funny, was in strong stage juxtaposition with Taylor’s Kevin, who, for the most part, was cool and collected. (Someone needed to be.)

Clybourne Park hits on a multitude of themes, big and small, with each of them important and ultimately reminding the audience of people's imperfections. What makes this production so captivating is that it offers no solutions to any of the issues it brings up, serving only as a jumping-off point, and my guess is one could find something different in every performance because the cast was so committed to the small details. Norris' Clybourne Park deserves its Pulitzer, and Playcrafters' production deserves to be seen.

Clybourne Park runs at the Playcrafters Barn Theatre (4950 35th Avenue, Moline) through July 22, and more information and tickets are available by calling (309)762-0330 or visiting Playcrafters.com.