A Reptile Dysfunction: "Lyle the Crocodile," at the Circa '21 Dinner Playhouse through July 23 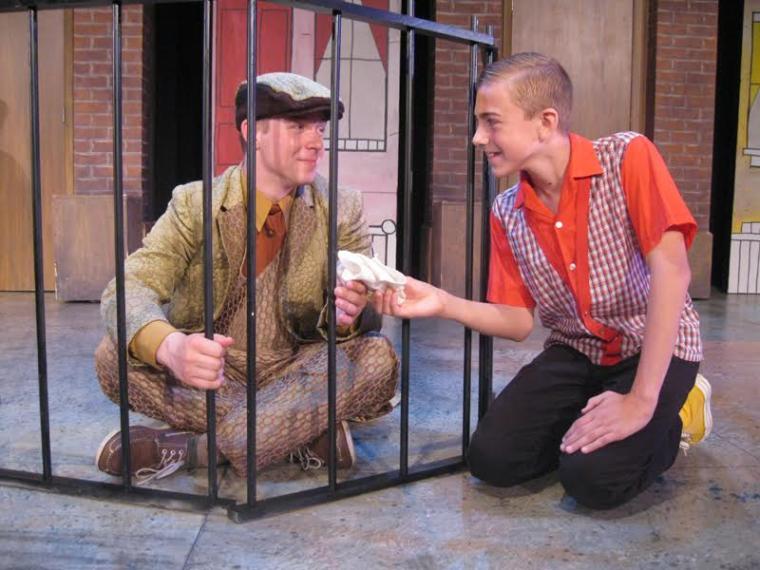 Jack Theiling and Ben Klocke in Lyle the Crocodile

Moving into a Victorian brownstone in the heart of New York City would be an adventure in itself, but imagine moving in and finding a full-grown crocodile in the bathroom. This is the start of a series of events in director Andrea Moore's Lyle the Crocodile, the Circa '21 Dinner Playhouse's latest family musical. Being familiar with author Bernard Waber's 1960s picture books on which this show is based, I feared the production would be too baby-ish for my “sophisticated” eight-year-old granddaughter Ava. But she consented to attend the June 25 performance with me, and afterward we agreed that the story was appealing to both elementary-school-age children and their parents. She did, however, point out that kids may have to know a little about Lyle's time and place (New York City in the 1950s), and about its references to turning crocs into purses and shoes, which she informed me was now illegal.

Adapted for the stage by Kevin Kling with music by Richard Gray, this whimsical musical tells the story of Mr. and Mrs. Primm (skillfully portrayed by Nicholas Munson and Morgan Griffin) and their shy son Joshua, who, as played by 14-year-old Ben Klocke, displayed singing, dancing, and acting talents that fared well alongside those of his more veteran co-stars. To their surprise, when they move into their new home in NYC, the Primms find a crocodile who was left there on purpose by his show-biz manager who could no longer feed him. Of course, his having a manager suggests that Lyle is no ordinary crocodile. This croc, dressed in a green tuxedo, can dance, juggle, tumble, jump rope, and even make delicious hors d’oeuvres, and each of his acrobatic feats elicited applause from the audience and brought a bigger smile to Lyle’s face. In the role of Lyle, Jack Theiling doesn't talk. But with his endearing facial expressions, Lyle sets about winning the hearts of every New Yorker he encounters – and also won over mine and Ava’s. (We agreed that Theiling gets the award for “Best Performance by an Actor Who Never Speaks.”) But as the story moves along, the audience discovers that not everyone loves Lyle, and Doug Kutzli masterfully plays a mean and nasty neighbor aptly named Mr. Grumps. Along with his “purr-fectly” spoiled cat Loretta (Cydney Roelandt), they threaten to lock Lyle away in the zoo, and as the cat was dressed in black tights, kitty ears, and a leopard-patterned tunic, Ava pointed out – and I agreed – that Loretta needed face makeup, too, because Roelandt was too pretty-looking when she was supposed to look mean.

Most of the time, we could hear the actor’s words distinctly, but not so much when Janos Horvath spoke as Lyle’s manager Hector P. Valenti. Although Horvath played the role with great enthusiasm, I didn't think it was necessary for him to speak with an Italian accent, as Ava and I both had trouble understanding some of his lines. As the nosy neighbor Mrs. Nitpicker, however, Kristin Gilbert came through loud and clear, especially when belting out her “Likability” solo a la Ethel Merman. Kudos, as well, to the ensemble cast of Noel Huntley, Amber Vick, and Jordan McGinnis, who played New York firefighters, school friends, shoppers, zoo crocs, and more, and were amazing in their versatility and quick costume changes. Director/choreographer Moore has assembled an energetic cast that looks like they're having a great time, with the actors especially engaging when all are singing and dancing together. Young fans of the Lyle books would have immediately recognized the set, which consisted of three row houses of green, yellow, and pink – full-size replicas taken from the illustrated pages of Waber’s books. And how clever of scenic designer Clay Becker to incorporate the moveable doors from Circa '21's current Sister Act as part of the Lyle set, which allowed for added movement and depth. Without giving anything away, there are also some very realistic effects to watch for, and without being heavy-handed, the show delivers a message about acceptance for those who are different along with its themes of confidence and kindness.

When I asked my granddaughter if she would help me with this review, she came to the theatre equipped with pen and pad. When the musical started, she jotted down a few notes about the colorful set and costumes. But during the opening number, all writing tools were set aside as she became totally engrossed by the stage action and story, and her eyes subsequently never left the stage until the final bows. Ava's totally unsolicited comment at the end: “That was a fun show. I'd give it an eight-out-of-10 rating.” High praise from this “sophisticated” eight-year-old.

Lyle the Crocodile runs at the Circa '21 Dinner Playhouse (1828 Third Avenue, Rock Island) through July 23, and more information and tickets are available by calling (309)786-7733 extension 2 or visiting Circa21.com.