The Robe Warrior: “Joseph & the Amazing Technicolor Dreamcoat,” at the Clinton Area Showboat Theatre through July 21 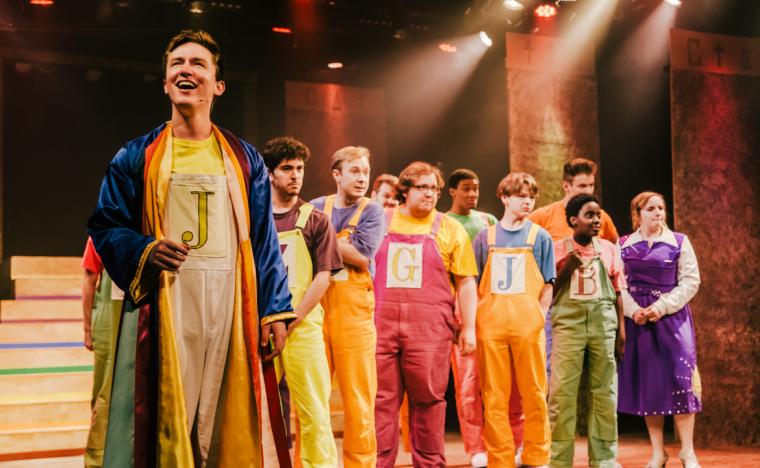 If you know Joseph & the Amazing Technicolor Dreamcoat, you know it's a fun show. If you've seen the current troupe at the Clinton Area Showboat Theatre, you know how deep-down wonderful they are. And when this company took on this classic musical, I expected to be dazzled. I was, as was the capacity crowd for Saturday's opening matinée performance.

You don't need to have read The Good Book to understand and enjoy Joseph. It's a very loose adaptation of the life of the Joseph of the Old Testament. It was written to be comical, engaging, and entertaining, and it is. The kids can see this one. (It's also only about two hours, including the pre-show welcome and intermission.) The catchy music is by Andrew Lloyd Webber, with lyrics by Tim Rice – a hit-writing team that has given us other smashes including Cats, Evita, and the much darker biblical adaptation Jesus Christ Superstar. Joseph began as a short cantata in 1968, and was then expanded and presented as a concept album in 1969. More productions followed as the show evolved. It hit London's West End in 1973, and Broadway in 1982. A direct-to-video version starring Donny Osmond was even released in 1999.

Joseph is a sung-through musical, meaning that there is little to no spoken dialogue. It's also the dancy-est show I've seen this season in Clinton. Because most of the cast members are onstage for much of the show, these aspects together mean little time for the actors to rest. However, on Saturday, their powerful, precise performances never lagged. 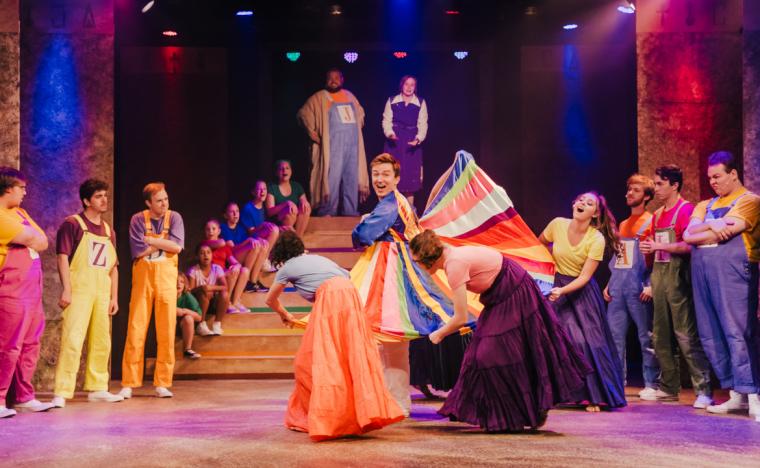 Popular material doesn't mean it's a snap to stage. Director Matthew Teague Miller (also producing artistic director for the theatre), musical director Laurie Lewis, and assistant musical director James Woods assembled many elements into a very pleasurable theatre experience. Choreographer Courtney Kattengell did a spectacular job creating interesting, varied dances for a big cast on a small stage. Scenic designer Tetta Askeland came up with the versatile rainbow-tinged stairs, and lighting designer James Kyle Davis washed it all with a spectrum of light. Costume designer Maru Perez-Viscasillas clothed the many characters in simple, dapper gear, and took the opportunity to let loose on the titular dreamcoat and a few other fabulous items of attire. Sound designer/engineer Hayden Bearden worked well with the six-member orchestra.

Sydney Howard, as the Narrator, is not merely on the sidelines – she also plays on the field and provides color commentary for most of the show. She's our friend, explaining it all to us with a stunning voice and expressive face and body. Guest artist Josh Daniel, as Joseph, is the quintessential golden boy, as handsome and marvelous as any prodigy whose jealous brothers wanted to kill him, but who managed to pursue a career in dream interpretation. Daniel's voice is one of the most powerful I've heard – and, more importantly, he uses it well. He also plays comedy and tragedy with equal skill. The man is as splendid as his coat. Nick Berninger, meanwhile, plays Pharaoh winningly, as the superstar the character is meant to be – and if Berninger isn't careful, he'll become a superstar, too.

Immense talent runs in this stage "family," as evidenced by the ensemble portraying Joseph's brothers and Jacob's wives, plus other characters through the show. My dilemma was that I wanted to watch every one of them all the time; everywhere I looked, someone was doing a great bit. For example, when the four women were clustered around Joseph in "Stone the Crows," I watched all their faces as they sang the same eight bars twice. They each packed varying combinations of adulation, shyness, awe, excitement, and flirting into those few seconds. Wow. 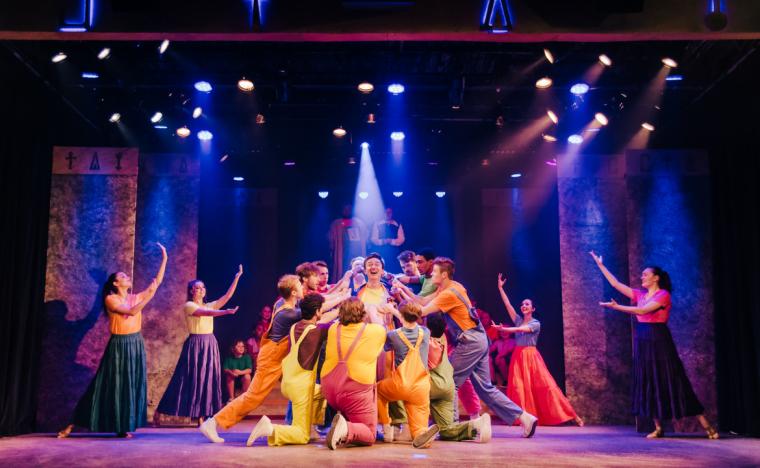 Another of the production's many likable aspects is that the cast members playing the brothers vary in age, like in a real family. While on this topic, I applaud two of the youngest brothers: the Quad Cities' own Trey Gordon and Joseph Brune. They blended in admirably with the seasoned performers. Every cast member, though, moves with precision and enthusiasm, and the actors do much flinging of themselves to the floor – and I hope (but doubt) that their landings are softer than they look. A youth chorus is also onstage (there are two, which alternate performances), and the one I heard sang well, and they'll no doubt learn a lot during this show's run.

There isn't a second-rate scene in the lot. The brothers and their mothers present "One More Angel in Heaven" spectacularly in both its maudlin message and extremely energetic “Yee-haw!” hoedown enthusiasm. There's also an unexpected touch of true sadness in the number as Jacob (Christopher Streets) plays his grief absolutely straight. Jacob, I must say, got to me.

The few British-isms in the lyrics will not confuse Yanks. However, for those wondering why corn is mentioned in a land and time in which it doesn't exist, it will help to know that "corn" is the British catch-all term for "grain" (usually meaning wheat). There's also a peppy medley of most of the songs at the end of this Joseph & the Amazing Technicolor Dreamcoat, ensuring that you'll be singing all the way home. I encourage you to "Go, go, go, Joe!"

Joseph & the Amazing Technicolor Dreamcoat runs at the Clinton Area Showboat Theatre (311 Riverview Drive, Clinton) through July 21, and more information and tickets are available by calling (563)242-6760 or visiting ClintonShowboat.org.