Rock and Roller Coaster: “Ride the Cyclone” at The Black Box Theatre through August 20 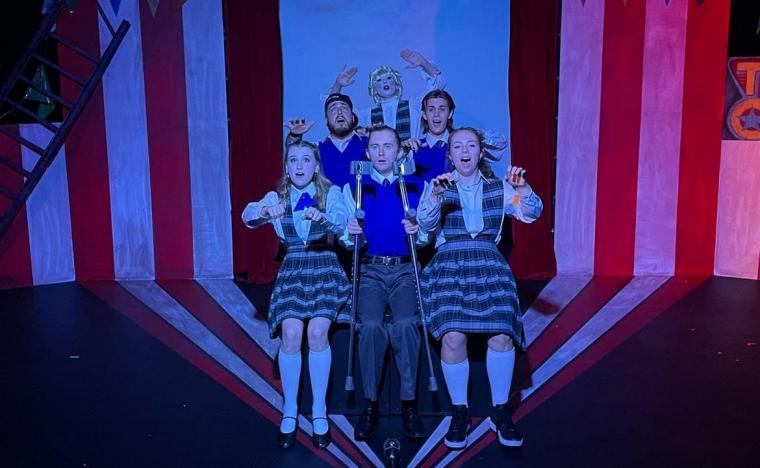 During Thursday's opening-night performance and area premiere of Ride the Cyclone, Ryan J. Hurdle’s character Ricky stops at one point in his song “Space Age Bachelor Man” and says, “It gets weird now.” But oh, gentle readers, that ship sailed from the moment the lights went down. I’m not going to lie to you: It’s not that director Shelley Cooper’s Black Box Theatre show isn’t well done, because it most certainly is. But it also left me with an overwhelming feeling of “What in the actual hell did I just watch?!?”

What I knew going into the evening was that it was a musical was about a group of teenagers who died in an accident on a roller coaster called “The Cyclone.” A talking fortune-telling machine, our host Karnak (voiced by Doug Kutzli), offers the chance for one teen to come back to life, and sure enough, that’s the basic plot. For an area debut, plenty of Thursday's audience members seemed to be quite familiar with the material, as they found great comedy in lyrics that I found rather hard to make out. (Thanks to music director Katie Griswold, the score sounded great, but if there was a presentational weak spot in Thursday’s performance, it was that the accompaniment's volume often overpowered the actors, making it difficult to decipher specific lyrics.)

Eager to get out of the in-between, the teens take turns rallying and singing to both introduce themselves and individually explain why they each deserve a second chance at life. (I would liken the show to a fun-house version of Cats, with kids competing to see who gets to go to the Jellicle Ball.) For instance, with the role brilliantly played by Taylor Lynn, Ocean's song “What the World Needs” was an early favorite of mine, and one that I'm not sure was ever topped. Not only was the tune super-catchy thanks to composers Jacob Richmond and Brooke Maxwell (who also wrote the book), but Cooper’s choreography was excellent. So let’s be clear: The production value of Ride the Cyclone is topnotch. All throughout, its sharp cast fully committed whether they were asked to play a French prostitute or a space cat, and beautifully executed their roles. 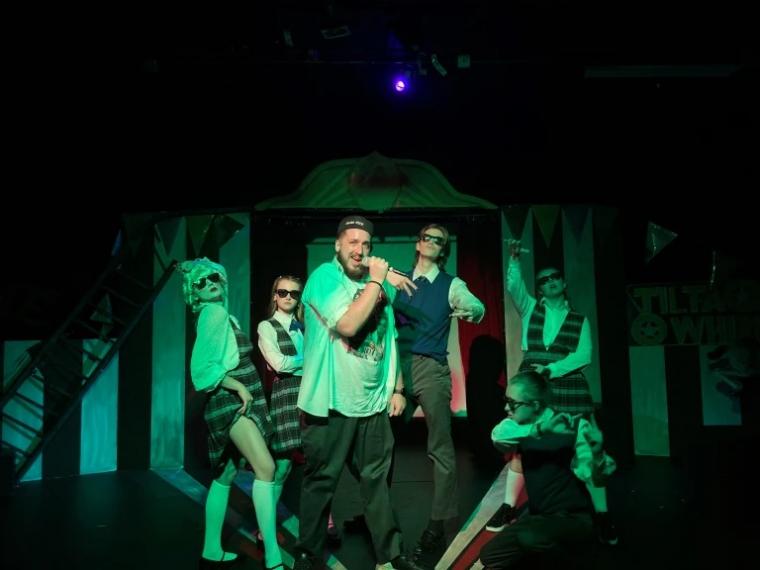 Yet you don’t get to ease into Ride the Cyclone, and, much like the ill-fated ride, there’s no turning back, as there isn’t an intermission to save you. Immediately, you meet Jacqueline Issacson’s creepy Jane Doe, a part-human/part-doll complete with well-executed, jerky movements, to boot. By the time you wrap your mind around that, you’re somewhere completely different … and that’s about as well as I can describe the entire production. Just like a roller coaster, there are twists and turns, you don’t stay in the same place long, and it all seems vaguely frightening – yet exhilarating at the same time.

I was definitely not anticipating just how unsettled I’d feel during opening night – it’s a dark comedy that’s just as likely to make you cry as laugh, and there’s no overarching genre featured in the music. From rap to rock to ballads, it’s all accounted for. Aiding to the broad range of music, the set itself designed by Lora Adams is pretty trippy, and the lights and projections by (fellow Reader theatre reviewer) Roger Pavey Jr. make it even more so. Sara Wegner did a fantastic job of specialty-painting the set that Michael Kopriva constructed, and it truly is one of the coolest, most well-executed scenic designs I’ve seen in a long while, offering plenty to take in over the course of the evening. Julien Blaine even built an incredible bumper car that provided a great spot for actors to chill throughout the show as they made their cases to return to life. 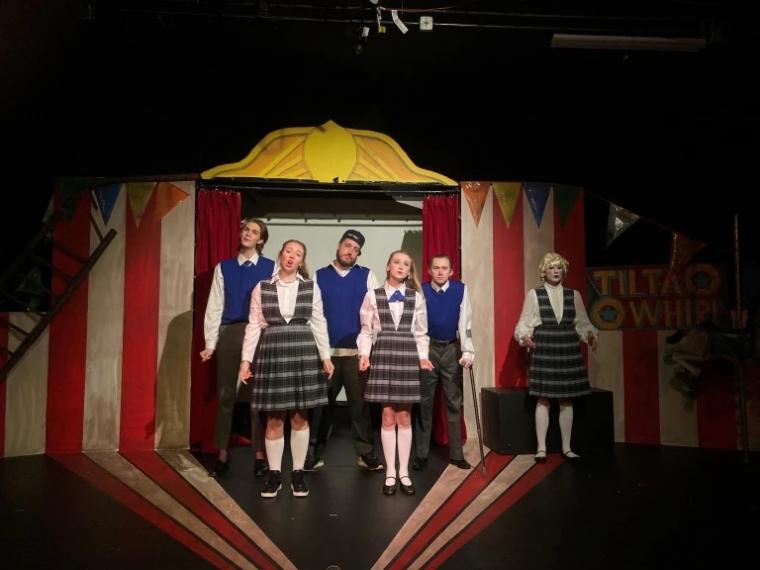 It was curious how wildly different the teenage figures were: You got the sense that the boys, especially, were only brought together because all the kids are in the same choir – not because they're friends or even know each other that well. But jointly, they made quite the cohesive unit. Eli Bates is engaging as Noel, and while the character's tale packs a big punch of surprise, the actor is more than up to the challenge. As was Brandon Smith, whose Mischa is both a lover and a fighter. Meanwhile, the story I found the most interesting was Constance’s, thanks to the unassuming and extremely likable Abby Bastian.

Overall, Cooper’s take on Ride the Cyclone boasts a lot of heart and is executed with near precision, a few pitchy notes and the over-loud accompaniment aside. At its core, it’s a macabre musical about dead teenagers in limbo, and that peculiar premise, in and of itself, may turn you off. But just like a roller coaster, you’ll never know if you like it until you give it a try … and at the very least, this production is thrilling.

Ride the Cyclone runs at the Black Box Theatre (1623 Fifth Aveue, Moline IL) through August 20, and more information and tickets are available by calling (563)284-2350 and visiting TheBlackBoxTheatre.com.