Shaken and Bakin': One-Off Theatrical Productions’ “Apples in Winter,” at the Mockingbird on Main through January 28 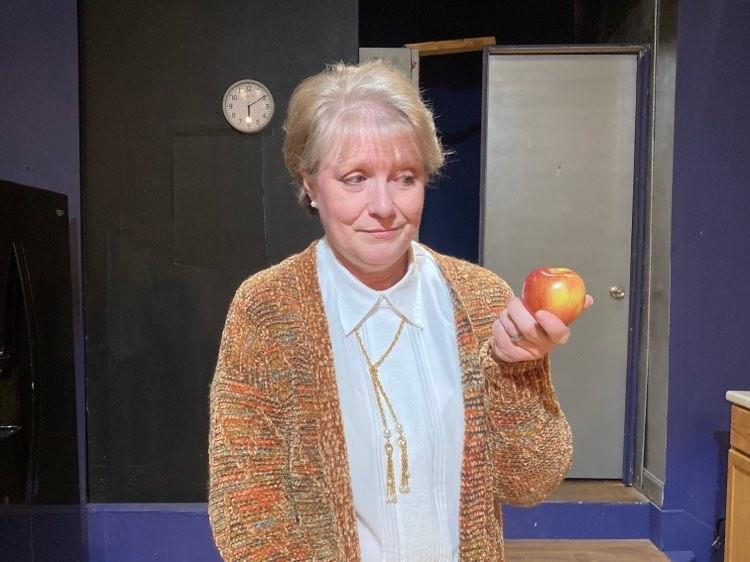 Kathryn Graham in Apples in Winter

Let this be a warning: If the incessant sound of a clock tick-tocking is not something you’re a fan of, you should probably steer clear of the Mockingbird on Main next weekend. From the moment you walk into the theatre that's presenting director Eric Teeter’s production of the one-woman show Apples in Winter, the sound is drilled into your brain. While the noise ebbs and flows in volume throughout the performance, the audible passage of time is a constant drip until the final plunge into darkness at the end.

Apples in Winter, by playwright Jennifer Fawcett, features a fascinating premise: Miriam (Kathryn Graham) is baking her son Robert an apple pie. This pie is her son’s final request – his last meal as a death-row prisoner convicted of murder. Obviously, Miriam has a lot of feelings to process, and watching Graham actively making a pie throughout the piece was just enough busy work to keep her moving, so the experience isn't just one woman hanging out on stage talking at you. From the click of the pastry cutter against the mixing bowl to the struggle with cling wrap (we’ve all been there), the familiarity of Miriam's process brought an overall comforting quality to a plot that’s primarily distressing.

There are many conflicting emotions throughout the piece for Graham to work through. Miriam loves her son but disagrees with his choices. She resents making a pie in a prison kitchen with limited ingredients and a knife tethered to the counter, but is still trying to put love and perfection into the resulting dessert. There’s a lot to unpack in this story: the love between mother and child; the prison system, addictions, the morality of capital punishment; and whether your apple pie-making method is better than Miriam’s, among other things. 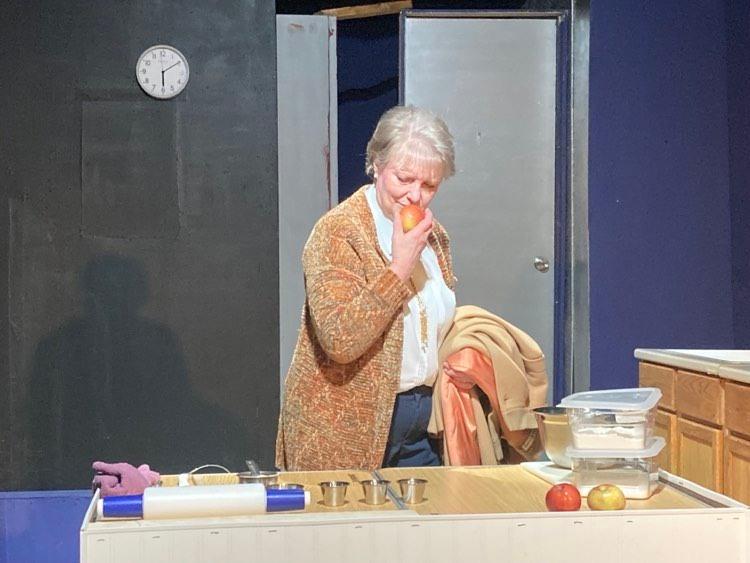 Graham expertly draws you in from the start as she enters the small kitchen exhibiting an initial reluctance, as though if she delays making the pie, her son won’t actually meet his fate. She gets to work soon enough, though, and it’s good to remember that the pie she is making is the one that makes Robert happy. So if you’re like me and fancy yourself an apple-pie aficionado and disagree with some particular steps Graham takes, just bear in mind that this pie isn’t being made for you. Except … it actually might be, given that Teeter and Graham raffle off a pie at each performance. (While I didn’t win, the pie certainly looked tasty.) Admittedly, the one thing I couldn’t get over during the pie making was that Miriam doesn’t preheat the oven. And okay: I get it. She’s not actually baking the pie on stage, just making one. But I’d be lying if I said that the lack of preheating didn’t take me out of the moment for a time.

As the title is Apples in Winter, Miriam takes care to explain her dissatisfaction with the apple variety in front of her, as well. Apple pie is not just the production’s action, but also the deeply entwined symbolism of her entire relationship with her son. Each little detail revealed throughout the show makes it obvious that apple pie has always been how Miriam tangibly showed Robert love, and yet, it has always seemed ill-fated. I especially appreciate the script details about the apple tree in Miriam’s yard – as well as how Graham made eye contact with audience members as she shared those moving moments. Graham had a way of making it seem as though Miriam was just a kind friend confiding in someone she trusted, making the Mockingbird the perfect venue for this intimate production. 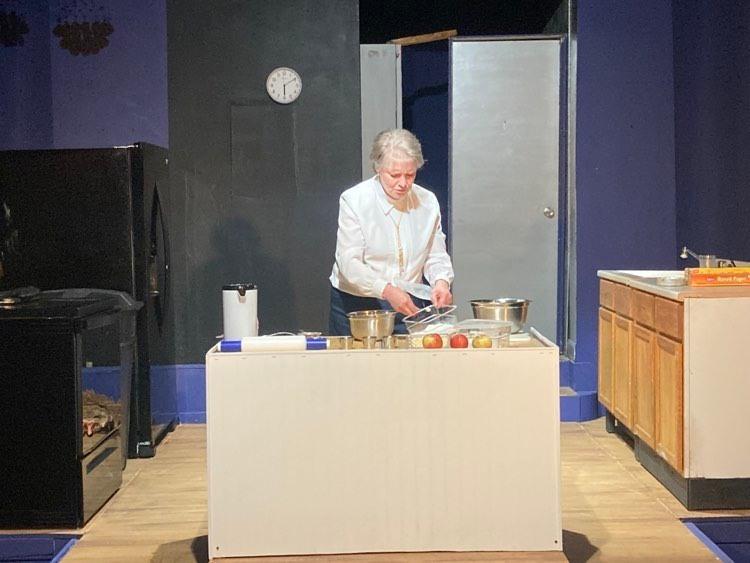 Meanwhile, the already tight stage space is further cramped by the addition of a fridge, stove, and kitchen counters. While that didn’t leave much room for Graham to do anything but pace, when Miriam’s desperation forces her to take a moment’s rest on her knees, I was slightly confused. I suppose, in a similar situation, I would have made use of the step or counter as a place to sit, but the intimacy of seeing a character break down in front of you was impactful just the same. And let’s not forget the continual ticking of that clock. At one point on Friday’s opening night, the ticking stopped for a millisecond resulting in the clock on the set’s second hand running ahead of the sound effect – a detail that bothered my companion, but that I didn’t mind much. What I fully appreciated about the sound was that it punctuated the moments of silence beautifully, emphasizing the foreboding feeling in the juxtaposition of this well-dressed, nice lady lovingly making pie.

Apples in Winter left me with a lot to ponder, as well as a desire for apple pie, making that raffle all the more worth your while. This production is equally sweet and tart – not unlike Graham’s dessert.

One-Off Theatrical Productions' Apples in Winter runs at the Mockingbird on Main (320 North Main Street, Davenport IA) through January 28, and more information and tickets are available by visiting TheMockingbirdOnMain.com.