Shock and Audrey: “Little Shop of Horrors,” at the Spotlight Theatre through October 3 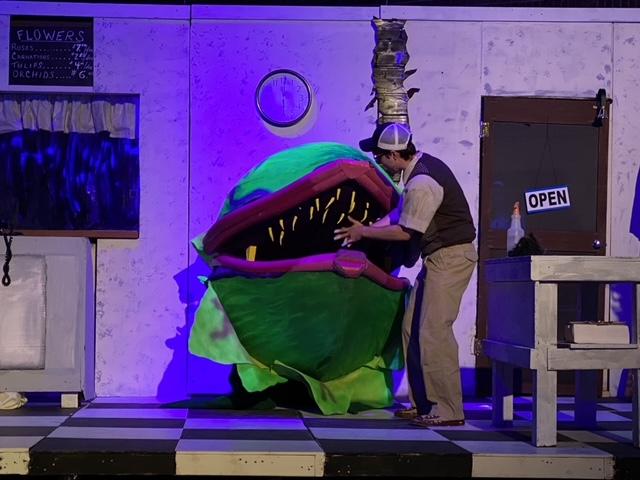 Audrey II and Jacob Johnson in Little Shop of Horrors

If you know this musical's title, and have seen any ad artwork, you already know that the show involves a very bad sentient plant. So I'll now reveal that it grows, as plants do. Except real big. And it's a carnivore. And it keeps wanting heftier portions of meat.

Little Shop of Horrors premiered off-Broadway in 1982, with its book and lyrics by the late Howard Ashman and music by Alan Menken. (This formidable duo also wrote The Little Mermaid and many other productions. Their tunes are catchy.) The musical is based on the 1960 movie, and it in turn became a film in 1986, and I made my third live visit to this Little Shop on Saturday at the Spotight Theatre. Director Brent Tubbs, music director Katie Griswold, and their cast and crew serve up a decadent buffet with everything you'd want in a musical comedy, from vocal excellence to wonderful acting to bountiful visual goodies. Tubbs also designed the set, lighting, and sound, and co-owns the theatre with his wife, Sara.

Much of the action takes place in Mushnik's Skid Row Florist, an appropriately grimy and dismal building on the inside (though when the set is rotated, we see that the outside walls are pristine). Billboards are above; a trash pile and rickety-looking stairs with railings flank the set outside the proscenium, broadening the playing space. And the show's 10-member orchestra is outstanding – so good that I had to remind myself that they were performing live, and that we weren't hearing a professional recording. 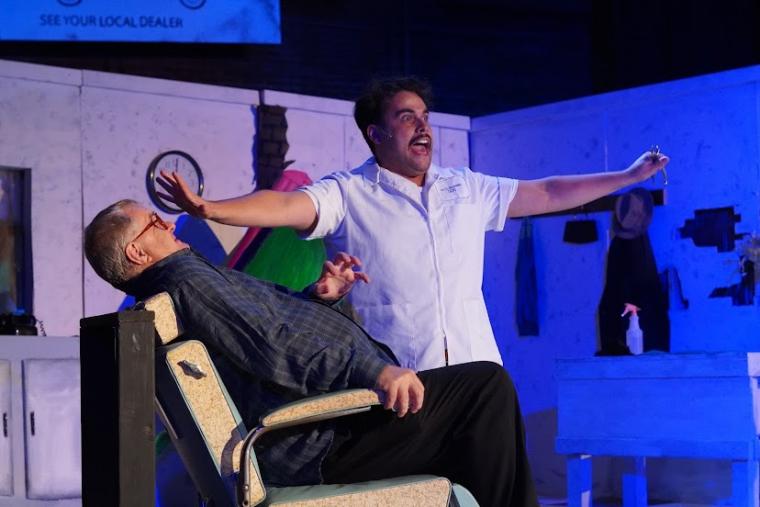 Jacob Johnson plays Seymour, the nebbishy guardian of the voracious plant, with professional-caliber skill. I'm so looking forward to seeing him on stage again. His Seymour is timid, but nonetheless has a strong presence, and Johnson's awkward yet controlled physicality also adds much. When shop owner Mushnik flings Seymour around while dancing, I thought he'd go flying into the wall. (Applause, too, for Chris Tracy's Mushnik and choreographer Robyn Messerly. It's a fun number.)

Becca Johnson (no relation to Jacob) portrays Seymour's coworker and love interest Audrey, a textbook ditzy blonde. Johnson acts with admirable nuance, even while singing, and mostly plays Audrey straight and sweet, without continual hammering of the comedy button. Her funny stuff is absolutely there, but subtle. At one point, Johnson chokes out three small sobs, accompanying each with a slight head and arm movement as she crumples a bit more, in stages. The performance is hard to describe, but she executes it wonderfully, and it's so much more effective than, say, throwing arms in the air while yelling. On the other hand, while portraying Audrey's violent dentist boyfriend Orin, Adam Sanders is flat-out hilarious when he throws his arms in the air while yelling. Whether angry, cocky, or goofy on nitrous oxide, Orin's mood swings and physical bits – notably in his scene with Seymour – are a wonder.

Kirsten Sindelar, Lillian Maynard, and Becca Casad are, respectively, Chiffon, Crystal, and Ronette – each the name of an early sixties girl group, and all three serve as such here. They narrate the show throughout in song, and are part of the action, as well. And what amazingly powerful voices they have! Their harmonies grabbed me by the heart, and they rock their dance moves with flair, too. However, I didn't expect to see streetwise urchins in demure earth-toned plaid skirts. I was gratified when they entered in gorgeous girl-group-style garb with gloves (also not urchin-wear, but this is a musical), and even though they went back to the plaid, they re-emerged later in different glittery gowns … only to re-plaid themselves. I'm guessing this was a practical concession, as one can't dance and run around in those beautiful dresses (with roses to costume designer Heather Blair). 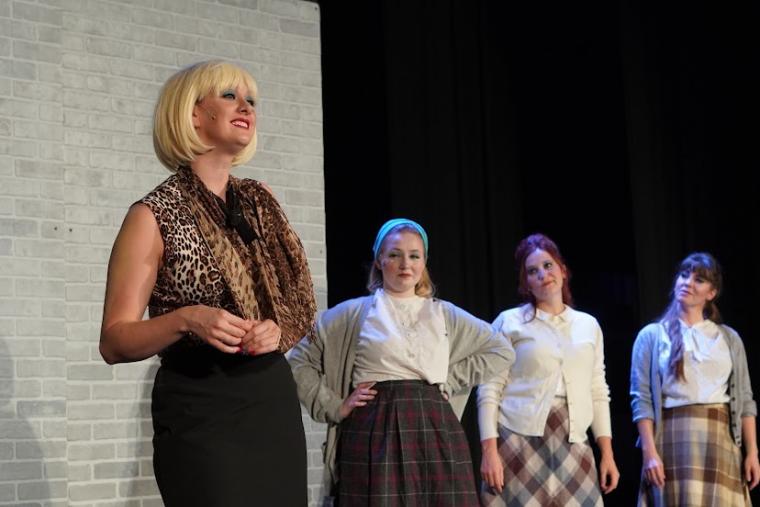 Tracy plays Mushnik as well as he did one of his other memorable parts – the title character in the Black Box Theatre's You're a Good Man, Charlie Brown – though the roles are very different. Mushnik is full of misery and always ready to spread it around, so it's a pleasure to see him happy in his aforementioned number with Seymour, “Mushnik and Sons,” that's one of the show's several standouts.

Then there's Audrey II, a.k.a.Twoey: the (literally) biggest star in the show. In its various stages of growth, the lethal plant is gorgeous, and the most expertly done version I've seen on stage. Bailey Hager designed Twoey, and Hager and the team of Brent Tubbs, Sara Wegener, Travis Hedman, Sara Tubbs, Jeff Tubbs, and Dottie Tubbs built the puppets. Violeta Jensen and Cooper Tubbs are puppeteers for the jumbo-sized versions of the plant, while Kevin Moore provides Audrey II's booming, coaxing, menacing voice and evil laugh. I commend Moore and the puppeteers for the lip-syncing.

Little Shop's actors often choose fresh interpretations for their roles here, and the performers are even adept when they don't move. One of Twoey's snacks is served whole, already dead, and that actor looked very limp and quite expired; I watched closely, and the actor's portrayal was all lolling, no twitching. Impressive. Meanwhile, the five-member ensemble that also revealed fine singing voices, do well as street folk, customers, and businessmen.

This light-hearted (no, really!) production is a great excursion out, and Little Shop of Horrors is a good way to get excited about Halloween, if you're not already.

Little Shops of Horrors runs at the Spotlight Theatre (1800 Seventh Avenue, Moline IL) through October 3, and more information and tickets are available by calling (309)912-7647 and visiting TheSpotlightTheatreQC.com.