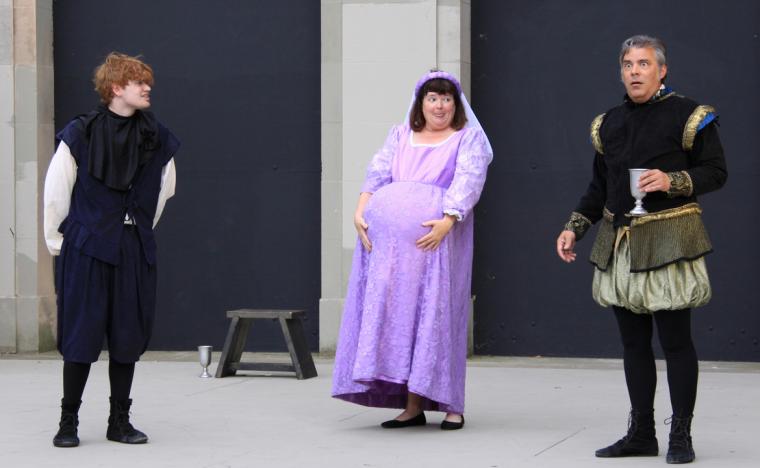 Whether you are shy about trying Shakespeare or are a Bard aficionado, has Genesius Guild got a show for you! The first production of their shortened season, Measure for Measure (abridged), is very funny, well acted, deftly staged, easy to follow, and – so important for an outdoor venue in summer – short.

With this 60-minute version abridged and adapted by theatre artist and educator Kevin Rich, Measure for Measure is considered one of Shakespeare's "problem plays" in that it supposedly defies classification by including both comic and tragic elements. In this adaptation (and production), the see-saw comes down solidly on the comedic side. No problem.

A cast of six portrays 12 characters, most of the actors stay seated on evenly-spaced stools throughout the show, and the unconventional staging includes no scenic-design elements and few props. Often, productions with sparse sets have a similarly simple costuming aesthetic. However, Sara Wegener's lush, vibrant attire added much to the visual experience – although I fear that, on Saturday evening, the players in their heavy, layered garb were very hot. (They certainly looked very hot, in the vernacular.)

The whole cast, as well as director Jeremy Mahr, are experienced Shakespeareans, and their aptitude with the archaic language and rhythm was evident – talk about speaking the speech trippingly on the tongue! In addition, every word was audible, so let's hear it for the dying art of vocal projection in an age of electrical amplification. 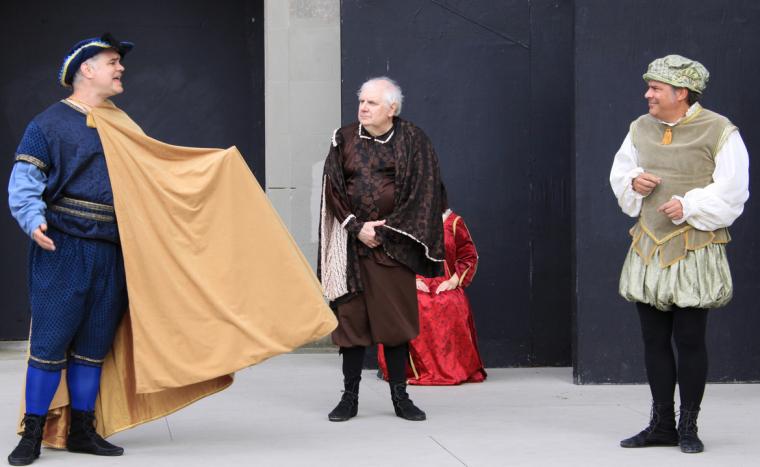 Played by Andy Koski, the Duke sets the plot in motion by putting an underling in charge while he takes a vacation to go undercover and tarry with the common folk. Koski is a chipper and confident Duke, refreshingly non-pompous, and a benevolent manipulator. One of the most laugh-worthy bits in this production (and the show is full of them) comes when the Duke reveals his dual role in the goings-on, brandishing his disguise and cheerily saying, "Huh?" with raised eyebrow.

Guy Cabell is breathtakingly funny as the aforementioned underling Angelo, Measure for Measure's bad guy. His hard-case proclamations, indecent proposals, and declarations of love somehow gain emphasis with his deadpan tone and manner. In this way, Cabell effectively conveys the extreme jerkiness of Angelo even better than all the shouting and coy sarcasm of a world-conquering Bond villain. Cabell also employs excellent diction – another old-school theatrical virtue.

Kitty Israel is Isabella, the least buffoonish of all the characters, and much of the bad stuff happens to her and her brother Claudio. (We don't laugh at her, but she does launch some bitingly funny lines.) Israel's Isabella is brave and intelligent, but her resolute intention to help Claudio turns conflicted as Angelo manipulates her. Her guileless nature is further challenged when the disguised Duke proposes a deception to get her out of her quandary, and Israel brings both sweetness and strength to her role.

Mischa Hooker's elderly courtier Escalus and melodramatic hanger-on Lucio are such distinct creations that the actor wouldn't even have needed to differentiate them by donning and doffing a coat, as he does. Hooker is a proficient comedian, and although I wished that Rich had not cut quite so many of Lucio's scenes, I especially enjoyed Lucio's color commentary as he eavesdrops on Isabella's entreaties on Claudio's behalf. 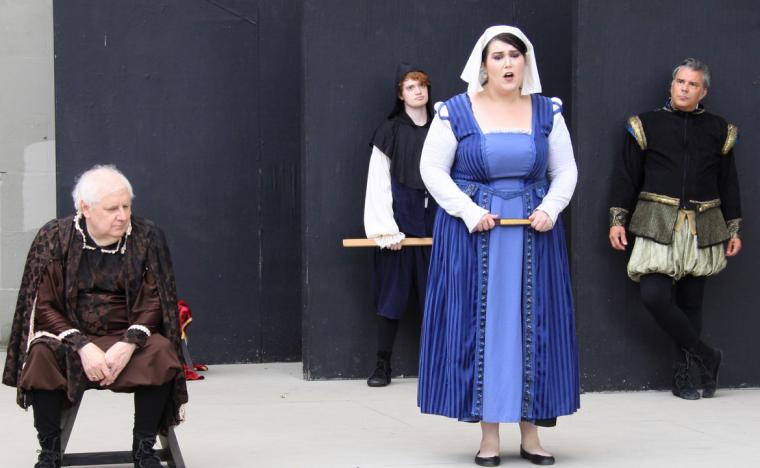 Noah Stivers, portraying Claudio, Provost, and Friar Thomas, provides the slapstick elements of Mahr's production – at one point literally. He plays up the inherent comedy in portraying multiple characters with broad gestures and ingenious line interpretations, and I look forward to seeing him on stage again.

The almost unbelievably accomplished Denise Yoder adroitly plays every female role except Isabella: Mistress Overdone (a madam), Mariana (a spurned woman and key to the Duke's plot), Julietta (Claudio's fiancée), and Francisca (a nun). All these roles are pivotal and enjoyable, though none are large (unlike Julietta, who is very large in another way – evidence of how Claudio got himself in trouble).

Shakespeare's language is one of his strengths, but can also be a barrier to appreciating his works. It's actually surprising that the English of 400-some years ago and an ocean away is as understandable as it is today. Thankfully, experiencing Shakespeare live makes much more sense than if you were reading a script. In this show, the bawdy jokes are nakedly evident, as are the creative insults, and I admired how the cast and crew largely adhered to the "less is more" principle. They resisted impulses to wring humor from the comedy with capital-W Wackiness (which made the wacky bits more hilarious). From the almost-nonexistent set to the subtle line readings (some dialogue was almost thrown away), the crew and cast wrought a lot from a little.

I attended on opening night, which was another of those not-so-rare 90-degree days that this June has brought. However, sitting comfortably in the shade of the trees, I relished this easy yet satisfying dramatic fare. It was like a light, delicious picnic lunch with friends (for so I found myself, as I unexpectedly wound up sitting in the midst of some longtime theatre pals and even got my first hug in 16 months). Do go to Lincoln Park this weekend and let Genesius Guild surprise you.