Slapsticking the Landing: “Noises Off,” at Augustana College through October 20 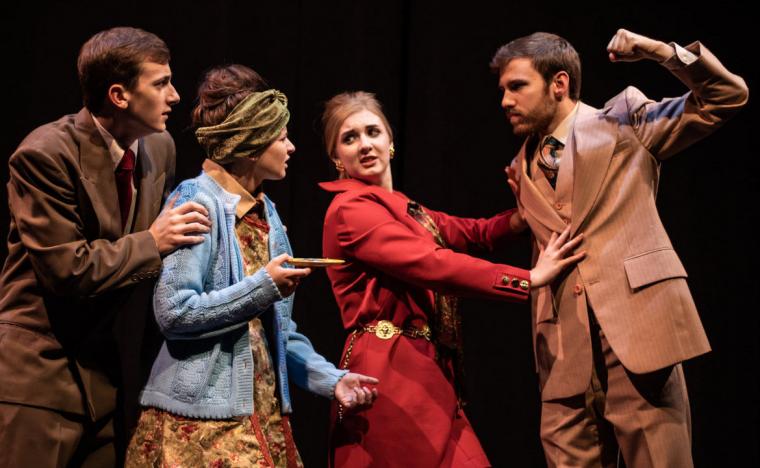 I attended Tuesday's rehearsal of playwright Michael Frayn's Noises Off at Augustana College's Brunner Theatre, and I have a question: Is it possible for Augustana's students to present a lackluster production? Director Jennifer Popple, her cast, and her crew brought a very challenging script to life.

As usual when coming to Augie's theatre, I recommend you arrive early enough to bask for a while in the loveliness of the set. This one is by Susan D. Holgersson and lit by designer Gary Holmquist, and Holgersson accomplished a tricky task in designing such a functional, attractive, compact two-floor set which must also have nine doors. Nine doors, you ask? Well, the play follows the exploits of a touring troupe presenting an English farce brimming with coy naughtiness, misunderstandings, secrets, mishaps … and hiding behind multiple doors.

Noises Off was nominated for a Best Play Tony Award in 1984, won the Drama Desk Award the same year, and came to the big screen in 1992. I've seen it a few times already, and as an actor and director, no matter where I see it, Act I is always mildly painful. It's inherent in the script. Like most theatre people, I've suffered as these characters do (though not all during one show). We witness the actor who can't handle props, the one who agonizes over believability, the one who never listens, the disappearing one, the yelling director, the suffering crew, all while toiling long hours whipping their production of Nothing On into shape at the final rehearsal before opening.

Wisely, in this production, the performers and crew are Americans whose characters are British, instead of Brits playing Brits as in the script. This helps delineate the actors' “actor” characters from the Nothing On characters they play. (A show-within-a-show can be confusing.) Some of the original language has been replaced with American equivalents, though there are plenty of "loves" and other typical British endearments flying around – which could be attributed to the American cast getting into the spirit of their show. However, the offstage references to donating something to Oxfam – charity stores roughly analogous to Goodwill – stood out as especially odd.

Some of these Augie performers are excellent at portraying two personas, all without the aid of costume changes. Ariela Policastro, as Brooke the actor, is calm but distracted and appearance-obsessed, while Brooke, in character, performs cheerfully and broadly. I'm talking exceptionally broadly, with her enormously exaggerated movements and voice only suitable for a preschool audience. At the other end of the spectrum, Peter Alfano (Freddie) draws the eye with his natural demeanor and body language, but still draws the line between his two roles with ease. Amy Nicholson, as Dotty (who plays the housekeeper), is also adept at becoming two different people.

Michael Tarchala, who portrays Tim, is marvelous as a dedicated but abused stage manager. Tarchala puts original twists on this hangdog fellow, making the character his own. Lindsey Edwards is believable and sympathetic as the beleaguered assistant stage manager Poppy, who keeps her head (mostly) when all about are losing theirs. Bradley Heinrichs is solid as the agitated, overburdened director, Lloyd. I feel the same simmering resentment against Lloyd as … uh, as some actors do against their directors. Sometimes. So I've heard. Heh.

Jarod Kovach, as Garry, is a phenomenal physical actor, and also serves as Noises Off's fight captain. (As the show proves, Kovach has clearly been a very busy man.) Noah Hill is Selsdon, the rowdiest fly in this particular ointment. The part is written as a loud, staggering disaster, but Hill somehow pulls it off with gusto without upstaging the others. Abby Overmann plays Belinda, whose problems are mostly offstage ones. Overmann was a pleasure as the airhead Hedy in Augustana's How to Succeed in Business Without Really Trying last season, and I loved seeing her in this mature mother-hen role.

Act II, which takes place a month after Act I, opens with tour-de-force fight choreography. While the play-within-a-play is running onstage, the juicier drama is played out backstage, and the cast's clashes, romantic entanglements, and confrontations leave Nothing On in the dust. The vigorous brawling, running, falling, galloping up and down stairs, and hurling of props, with only a few strained whispers for dialogue, is magnificently done. And some are doing it in heels! I also have to commend Augie's amazing run crew. These seven strong women have to flip the entire heavy set around not once, but twice.

The final Nothing On performance is disastrous – and hilarious, though it, too, brings back my own pangs of theatrical setbacks and discord. However, as both on a real-life stage and a stage/stage, no matter what happens, who screws up, or why, the show must go on … and does.

Just like in real-life rehearsals, F-bombs are dropped – so although the action will captivate those with short attention spans, those who avoid crude language should beware. Please do come out to see this exuberant achievement by a group who may be the hardest-working theatre folks I've ever seen.