Some People Call Him the Space Cowboy: “The Little Prince,” at the QC Theatre Workshop through May 19 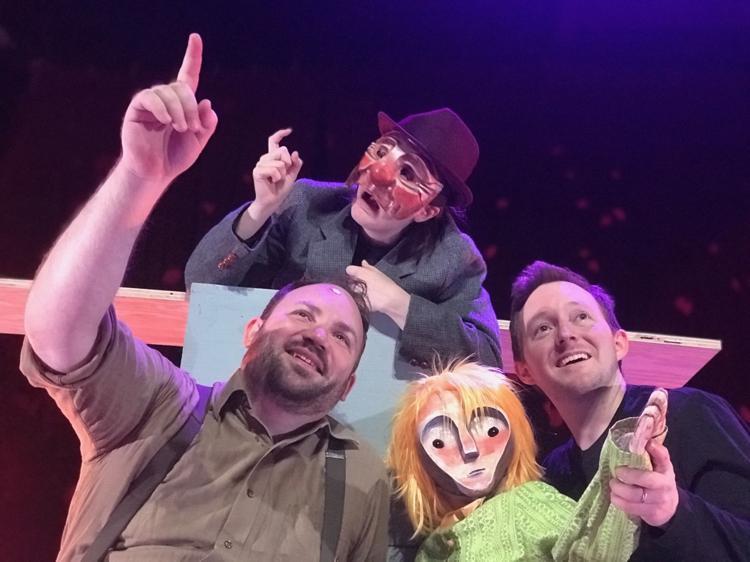 In author Aaron Randolph III’s brand-new adaptation of Antoine de Saint-Exupéry’s classic tale The Little Prince, we’re immediately introduced to Aviator (Randolph) as he tells us a tale from his past, in which he crashed his plane and met a boy, Little Prince (Daniel Rairdin-Hale), who is traveling from planet to planet. Aviator and Little Prince have a lot to learn from each other, and this charming production serves up many life lessons.

In this collaborative piece of theatre with no specific director credited, Rairdin-Hale served as the puppet master for the production and performed the title role, and his deep familiarity with the Little Prince puppet was evident. Little Prince was a nuanced character with great physicality. I found myself mesmerized by Little Prince’s movements, especially when he walked, but Rairdin-Hale’s facial expressions as the one controlling the puppet were also wonderful. Randolph, meanwhile, manages to give the show a nice balance with his grown-up Aviator. Little Prince was completely charming, and it wasn’t hard to see how Aviator would become enchanted by the childlike figure's talk of sunsets, walruses, and tubas rather than behave as the exasperated adult he was when first encountering his new friend. 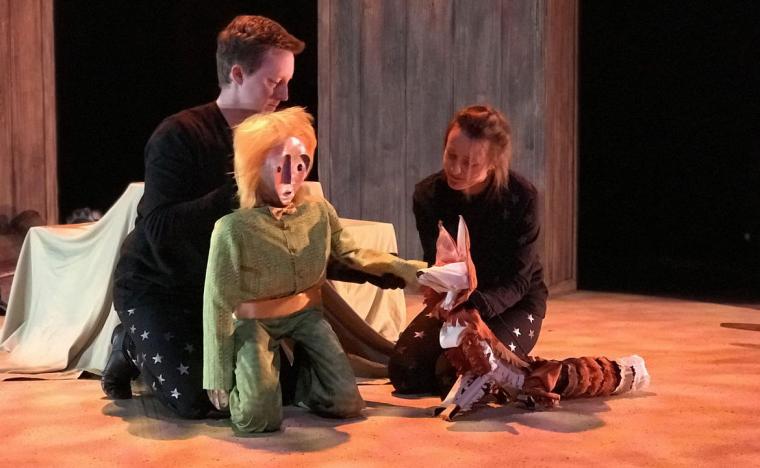 Also serving as costume designer, Rairdin-Hale made the decision to adorn the black outfits traditional to puppeteers with silver stars to reflect the cosmos world The Little Prince celebrates. He also created the production’s many masks, and while largely similar to each other, each mask was specifically different, with very illustrative qualities. Rairdin-Hale created excellent cohesion to the production’s universe, which was further reflected in Aaron Hook’s scenic and lighting design.

Often, youth-oriented productions are all about big splashes of color and overly upbeat performances. Hook, however, creates a Little Prince world that is calm and relatively somber with a neutral palate. From the start, this is an excellent indication of where the overall experience will take you, as this production is one of introspection and melancholy with an altogether subtle takeaway. At one point, the pieces of the crashed plane that Aviator attempts to repair are cleverly put together to become a throne, and I eagerly anticipated the pieces fitting together to re-form the plane at some later point. Unfortunately, that didn’t happen. But the many set pieces were skillfully shifted around the stage to become all manner of locales, including Little Prince’s very own, tiny home asteroid.

When I first arrived at the QC Theatre Workshop for Saturday’s matinée, I was excited by the completely different stage set-up, with the audience where the actors would usually perform and vice versa. The only downside was that one would have to cross the stage to exit the theatre, which typically wouldn’t be a problem. However, given that this production is declared as one for all ages, if patrons on the younger end of the spectrum needed to make a swift exit to avoid disruptions, there was really nowhere else for them to go during this 70-minute one-act. (No parent aims to steal the spotlight with a crying baby, but for the last 20 minutes of Saturday's matinée, a crying baby was among our patrons.) Hook’s lighting choices, however, accentuated the piece impeccably – the Sahara was bright while Little Prince’s dreams and memories were a bit fuzzy – and key moments \were adeptly accompanied by original musical compositions by Randolph and Dillon Rairdin. 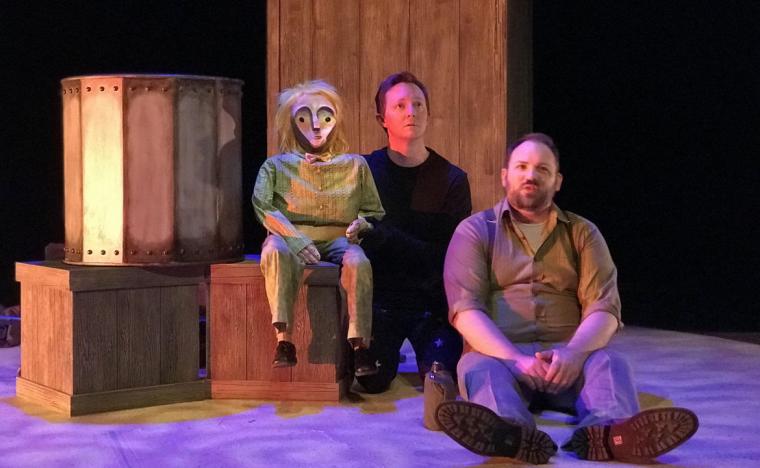 Amelia Fischer rounded out the three-human cast with the huge job of the production’s complete nine-character ensemble, and brought energy to the otherwise subdued production; her characters were often louder, and especially animated, compared to the low-key demeanor of Aviator and Little Prince. (The performer was especially skilled with the three puppets she operated, each having distinct movements and characterizations.) And as Fischer appeared on stage, so, too, did the major metaphor of the show, in that adults are much like these simple-minded characters: far too short-sighted to enjoy life. As I grappled with the reality of trying to not lose a childlike wonder and the appreciation of simple things such as sunsets, I was struck dumb by my daughter’s question of why there weren’t very many girls in the story. On reflection, the only obvious female in the show at that point was literally a delicate flower whose constant needs provoked Little Prince to leave home in the first place. Sure, in Antoine de Saint-Exupéry’s 1943 France, no one would have blinked an eye at seeing a play dominated by male characters. But this fresh adaptation does seem like a missed opportunity to not have at least some of the men become women. (A queen, for instance, could have made for an equally clueless-adult metaphor.)

Randolph’s adaptation did keep the language simple and accessible for children – though occasionally the pacing is so calm that it was almost hypnotic, and the show consequently became harder to follow. Ultimately, this production is completely appropriate for children. But adults probably have the most to gain from The Little Prince, as it's the rare piece of theatre that allows you the chance to take from it what you need. Whether you’re looking for a show to remind you of love, friendship, and the effects of loneliness, or merely an outlet to appreciate expert puppetry, the QC Theatre’s Workshop’s intimate and fanciful tale is available.

The Little Prince runs at the QC Theatre Workshop (1730 Wilkes Avenue, Davenport) through May 19, and more information and tickets are available by calling (563)823-8893 or visiting QCTheatreWorkshop.org.