Spirits of St. Louis: “The Glass Menagerie,” at the Clinton Area Showboat Theatre through August 13 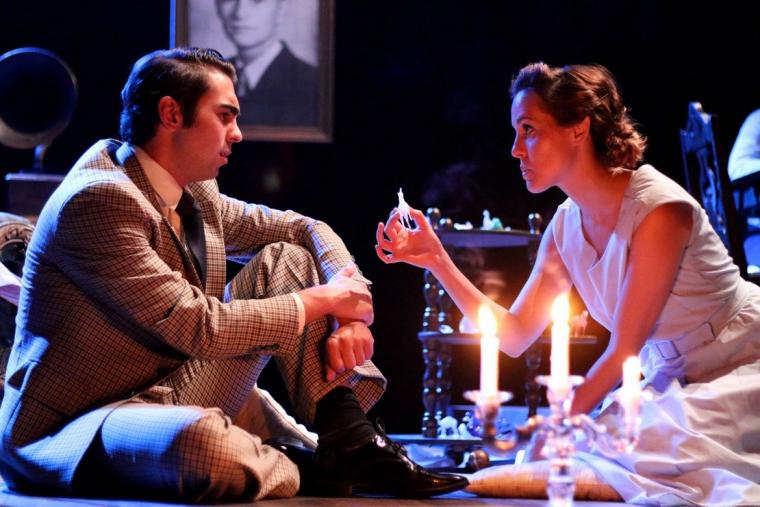 Christian Klepac and Jami Witt in The Glass Menagerie

Dining alone in a restaurant before attending the Clinton Area Showboat Theatre's opening-night production, I couldn’t help but hear a mother-and-daughter conversation – or rather, confrontation – at the next table. The mother was insisting that her child (who I'm guessing was about eight) put her long, loose hair into a ponytail so it wouldn’t fall into her face while eating. The strong-willed girl refused. The mother kept insisting, and eventually tried pulling the girl's hair back with a hair tie, with her daughter squirming and shaking it loose. This battle of wills went on for five excruciating minutes, but I had to smile as I thought, “This little drama is a microcosm of the play I'm about to see.”

That play was Tennessee Williams' The Glass Menagerie, and although presented on a much grander scale than the one in that restaurant, the Williams mother Amanda Wingfield also wants what is best for her children, yet never allows them to simply make their own mistakes. Amanda's devotion is overbearing and suffocating, resulting in an adult son and daughter unable to cope with life, and is one of many themes explored in this autobiographical drama by one of my favorite playwrights. Set in Depression-era St. Louis, The Glass Menagerie, directed by Matthew Teague Miller, is a memory play in which the Wingfield son Tom serves as narrator and a principal character, sharing his memories of living with his mother and sickly older sister Laura. Especially when speaking directly to the audience, Jon Loya captures the conflicted nature of Tom, drawing us into his world and a defining moment in his family’s history – a haunting memory he both hates and needs to recall. While Williams' script features the employment of imaginary objects such as cups and food, we can feel the Wingfields' physical oppression thanks to scenic designer Jared Hansen and lighting designer James Morrison, who created the production's shabby furnishings and dimly-lit apartment. The atmosphere here is appropriately stifling.

Playing against Loya is veteran actress Jalayne Riewerts as Amanda, and the performer's Southern-belle demeanor was garrulous and tenacious. With her husband having left the family many years ago, Amanda's focus has subsequently been on her children. And given her constant nagging and prodding, Amanda's intentions of wanting a better life for them have backfired, and she has instead made for them an insular life in which her son is a poet and dreamer, and her daughter is crippled both physically and emotionally. In The Glass Menagerie, Riewerts fashions a character who causes instant friction, and yet we cannot blame her; she is a woman trying to survive, and her children simply don’t have the drive and energy that she herself exhibits. Riewerts never lets up in her interpretation, and even if she speaks a bit fast for a Southerner, Amanda's bulldog persistence is evident whether the performer is sparring with Loya or forcing her will on her delicate daughter, played by Jami Witt. I purposely watched Witt as she stood in the background, at times, witnessing the battle of wills between Tom and Amanda, and expressing the heartbreak of a child who knows she is at the core of the argument; her brother's having to forgo his dreams and support the family is her guilt to bear. Although her physical disability was not apparent on August 4 (she didn't walk with a limp or have any difficulty bending down or kneeling), Witt’s Laura still had an intangibly poignant quality. Here was a human being – one not quite complete and just learning about the world – able to express her glee at visiting museums and parks once freed from her mother’s reach. But under her mother’s roof, she is helpless and vulnerable.

Holding his own as a former high-school BMOC is Christian Klepac's Jim, the gentleman caller.” After all the sad disillusionment of the three main characters, we expect this one to be a fresh relief. But we instead discover that he has had a life of setbacks, and his lecture to Laura about being a positive person is more of a pep talk to himself. Klepac is totally believable as this somewhat ambitious visitor, while Jim's tender moments with Laura give the audience hope that all, in the end, will be well.

This is the last presentation in the Showboat's summer season, and ending it with the lyrical writing of Tennessee Williams' The Glass Menagerie is a great way to cap the company's season of classics. In one of Tom’s addresses to the audience, he says, “The gentleman caller is a symbol of that long delayed, but always expected, something we live for.” As for me, I will await a figurative gentleman caller in the form of next summer’s lineup of productions. And by the way, lesson learned: Allow your children their mistakes. (Such as, oh, refusing to wear a ponytail.) Otherwise, you may wind up a nagging character in a Tennessee Williams-esque play.

The Glass Menagerie runs at the Clinton Area Showboat Theatre (311 Riverview Drive, Clinton) through August 13, and more information and tickets are available by calling (563)242-6760 or visiting ClintonShowboat.org.