Springs Eternal: “Tuck Everlasting,” at the Spotlight Theatre through June 12

After a rough few weeks, I wanted a diversion. So even though I hadn't read the Natalie Babbitt novel on which it's based, I was happy to attend Thursday's final dress and tech rehearsal for Tuck Everlasting at the Spotlight Theatre. I left feeling both impressed and refreshed.

This musical's book is by Claudia Shear and Tim Federle, its score by Chris Miller, and its lyrics by Nathan Tysen. The show opened on Broadway on 2016, and the Spotlight's lively, sophisticated version was directed by Becca Johnson – so delightful as Audrey in the venue's fall presentation of Little Shop of Horrors. Between Johnson, musical director Mason Moss, and the whole staff, cast, and crew, this production boasts a passel of multi-skilled folks. Among them, the almost dangerously talented Wrigley Mancha plays Tuck Everlasting's focal character: 11-year-old Winnie. Mancha was extraordinary starring in Quad City Music Guild's Matilda: The Musical last August, and her two characterizations are so precise that I might not have recognized her in this role if it weren't for her amazing voice.

In this rural fantasy, Annie Huston bears a foggy atmosphere of fret as Winnie's anxious Mother, while Susan Perrin-Sallak convincingly inhabits the role of the girl's sympathetic Nana. Despite her caring family, Winnie feels oppressed, and dreams of escape. (Her song "Good Girl, Winnie Foster" echoes Mancha's "Naughty" from Matilda, but Matilda herself was a prickly mutineer, whereas Winnie is a starry-eyed rebel.) Winnie sneaks out and meets a teenager, who's another good-natured sort of rebellious. As Jesse Tuck, Ryan Hurdle pleasingly embodies all the coiled-spring energy and enthusiasm of a boy on the edge of manhood. Many that age wouldn't be as kind to a kid like Winnie (and a girl, at that), but Jesse treats her as a little sister worthy of taking along on his adventures.

Winnie consequently deduces the importance of a little brooklet nearby (which, as I noticed before curtain, is bubbling with real water). This was the cause of a miracle (or a calamity) for Jesse and his family – they innocently drank from it almost 100 years ago, and haven't aged a day since. Now, the Tucks have to decide what to do about Winnie knowing their secret.

Aaron Baker plays Jesse's bitter brother Miles so authentically that I wanted to shake Miles for being so nasty. In Baker's heartbreaking performance of "Time," we learn the source of Miles' anguish. Theatre co-owner Sara Tubbs warmly portrays the brothers' sweet mother Mae, a mom we'd all like to have. She takes solace in her family, and in memories, as she sings in "My Most Beautiful Day." Brant Peitersen is Mae's husband Angus, an exceedingly lovable fellow whose genial demeanor and gentle explanation of life in "The Wheel" are evidence that he will make the best of their fates.

As Tuck Everlasting's Man in the Yellow Suit, Aaron Hill deploys such a robust voice and fetching dance skills that I kinda liked his villainous character; the Man's shocking cruelty is despicable, but he's just so darned happy about it that sometimes only his frequent, annoying cackle reminds us that he's actually the tale's bad guy. Hill's character is also the inspiration for the charming vaudevillian number "You Can't Trust a Man" with Constable Joe (Eric Teeter) and his protégé Hugo (Jacob Johnson). Teeter can seemingly play just about anyone, and Johnson tickled me with Hugo's awkwardness, just as he did as über-dweeb Seymour in the Spotlight's Little Shop of Horrors. I was in awe of this show's energetic ensemble, all of whom were marvelous right from the opening number "Live Like This." Their strong voices, precision dancing, and constant expressiveness gave the production a satisfying weight and verity. 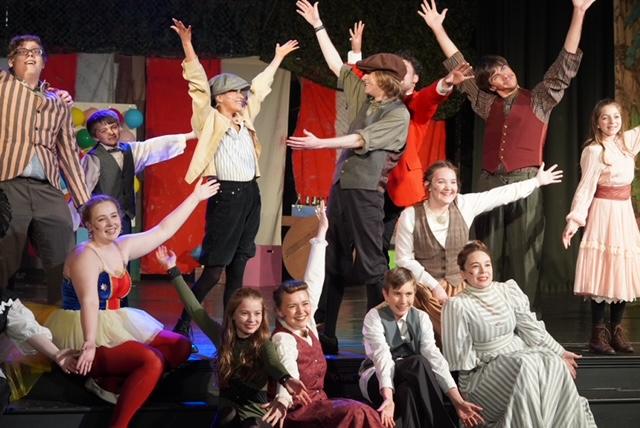 Tuck Everlasting concludes with a dream ballet, the theatrical term for a wordless musical montage in which dancers take over the portrayal of some characters. In this one, Christianna Crosby gracefully dances the role of Winnie – choreographer Bethany Sanders did a superlative job with every dance throughout – while the 10-player orchestra was almost preternaturally good. (Instead of being relegated to the pit, the musicians unexpectedly perch in the treetops.) Theatre co-owner Brent Tubbs designed the gorgeous set alongside actor Hill, and I could rave about that, Heather Blair's impressive costuming, and more -- but I'm running out of room.

On Thursday, there were a couple of fleeting issues with the actors' mics, and once during the opening number, the orchestra overwhelmed the company's singing. Also, two of the key actors seemingly hadn't done sufficient vocal warming up, as their singing improved significantly as the show went on. But this was a rehearsal, after all.

Beautifully and creatively told, Tuck Everlasting poses a question: Would you want to live forever? It might seem appealing at first, but on reflection, it could be tortuous. We all have obstacles and challenges in life: some we are born with; some we attain; some that are thrust upon us. I prefer my finite problems to the everlasting Tucks' predicament. Make time now to see this endearing show. It won't run forever.

Tuck Everlasting runs at the Spotlight Theatre (1800 Seventh Avenue, Moline IL) through June 12, and more information and tickets are available by calling (309)912-7647 and visiting TheSpotlightTheatreQC.com.