Strangers on (and Off) a Train: “The 39 Steps,” at Augustana College through March 13 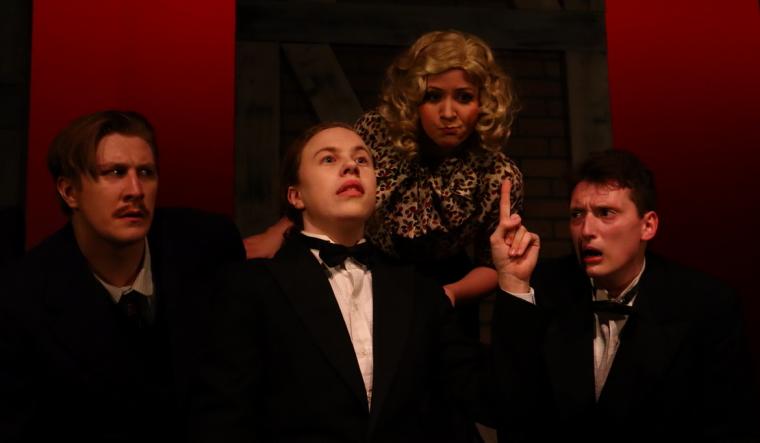 Will Crouch, Roger Pavey Jr., Sarah Walton, and Aiden Lenehan in "The 39 Steps"

Each time I've attended a show at Augustana College's Brunner Theatre Center, I'm astonished by both the acting and technical brilliance. We had some great performers and techies during my St. Ambrose days, to be sure – but our theatre certainly wasn't equipped like this one. However, my justifiable envy doesn't lessen my enjoyment while at Augustana, including at Tuesday's dress rehearsal for The 39 Steps, directed by theatre professor Jeff Coussens.

This story, in its current form, took a long route from its beginnings as a serious spy-thriller magazine serial in 1913. Patrick Barlow wrote this particular comedic script, which debuted in England in 2005, although its characters and plot are based on those in Alfred Hitchcock's smash 1935 film adaptation. The 39 Steps play has a local history, as well, as the Black Box Theatre offered it in radio-play format in 2020, the Richmond Hill Players' production was in 2019, and the Playcrafters Barn Theatre's version went up in 2012. The most notable aspect of Barlow's script is that this multiple-character, multi-location story is carried out by only four actors using a few simple stage pieces. Augustana's performers and crew are well up to this challenge. 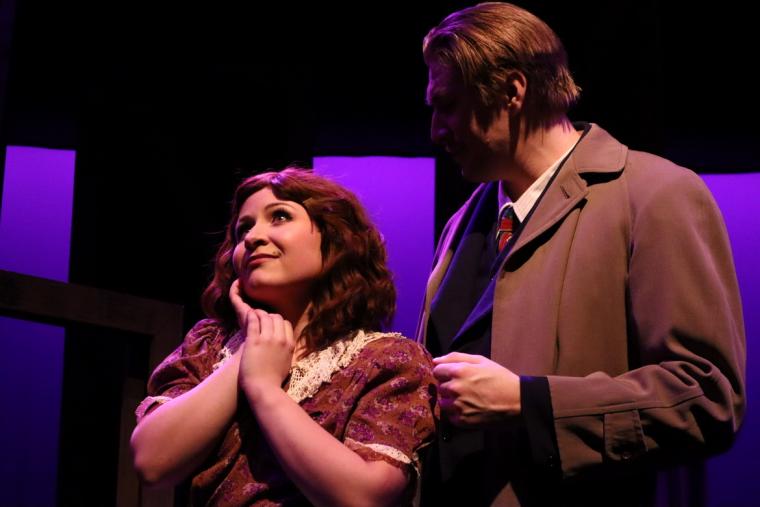 Will Crouch plays the staid Richard, who views the world from his armchair. He's hurled into intrigue by innocently allowing the mysterious, gorgeously garbed Annabella, played by Sarah Walton, to sit next to him at the London Palladium. On that stage, we see the aptly titled Clowns who portray most of The 39 Steps' characters. This raucous, energetic pair, Roger Pavey Jr. (the new Reader theatre reviewer) and Aiden Lenehan, would be at home on any music-hall stage – or at Shakespeare's Globe Theatre. Their variety of accents, postures, temperaments, and types of people they take on is staggering. The Clowns' zany physical and vocal acrobatics do most of the work, given that there's minimal costuming to signify their transformations – sometimes only a change of hats (and my hat is off to costume director Emily Bushá for the cast's wardrobe). They also take charge of some scene changes. At times, however, the actors spoke so rapidly in their various accents that some of their consonants were lost, and lines seemed to become a series of vowel sounds. Pavey and Lenehan do portray their characters' moods with more than just words, but I found some of the patter hard to understand. It could've just been my aging ears.

As is typical for Augustana's productions, this one ran smoothly – three nights before opening, they were ready to open. There were only minor glitches, which wouldn't be noticed by most people (and which I noticed chiefly because of the crew's chuckling). And I especially appreciated the actors' responses to the unexpected. There are plenty of scripted "mistakes" in the show, as the conceit here is that the Clowns may, for example, be late with a cue, which aggravates other characters. However, at one point on Tuesday, a rotary phone came apart in Pavey's hands, clearly accidentally. A pro on both sides of the footlights, his "whoops" take to the audience was completely in character, and not the actor's personal reaction – a subtle but important distinction. Lenehan, who appeared in the college's delightful How to Succeed in Business Without Really Trying in 2019 among other shows, is likewise facile and versatile. His demeanor when he kneels stoically behind a counter and drones "Aye" as a weary hotel proprietor, as well as his attitude when he struts about the Palladium stage gesticulating grandly as an emcee, are both amusing. 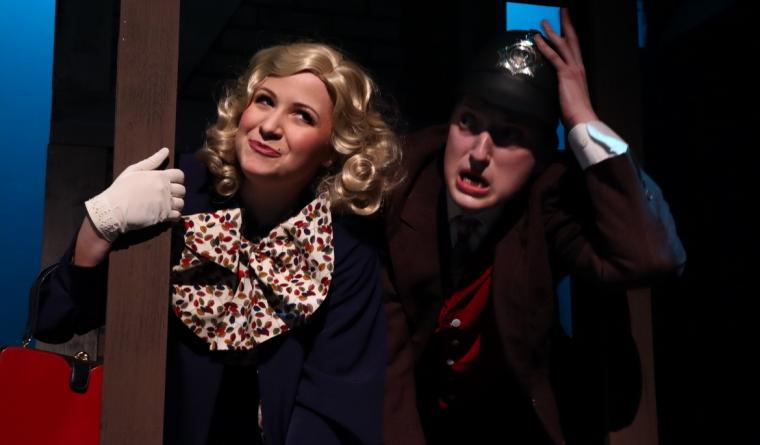 Richard, the hub of this frantically spinning wheel of a plot, could have come off as bland compared to the Clowns. However, Crouch's performance is dizzyingly charismatic as well as comedic. As assorted good and bad guys pursue Richard across Great Britain, he becomes less bewildered and more confident. Crouch's voice has a wonderfully smarmy, quasi-heroic Troy McClure/Zapp Brannigan-type timbre, and his reactions to events throughout, particularly when he smolders, are hilarious. He's so convincing as a 30-something fellow, I thought he was one – a nontraditional student playing the part. (Turns out Crouch is a 20-something junior. Ac-ting!)

Walton, meanwhile, takes on all three major female roles with admirable dexterity. Though her pronouncements are foreboding, Annabella is adorable when she curses in German. Walton's second part is the shy, winsome Margaret, for which the performer employs a nicely authentic Scottish burr. Lastly, Walton portrays Pamela, who encounters Richard on a train and ends up handcuffed to him, thus necessitating that they spend the night together. She carries off some uproarious physical bits while Richard is snoring (convincingly) and she gets pulled around by the arm as he tosses about on the bed.

Virtuosi scenic designer Cameron Strandin and lighting designer/sound designer/technical director Mike Turczynski and their crews create striking ambiances throughout. They transform tall, stationary flats with brick-and-beam textures into different settings with light, projections, and sound, and their train, with its video and surround-sound effects, is particularly impressive. Taken as a whole, the team behind Augustana's The 39 Steps does a remarkable job of staging this difficult script, so do make time to come and enjoy it.