Sugar Rush: “Just Desserts,” at the Circa '21 Dinner Playhouse through May 14 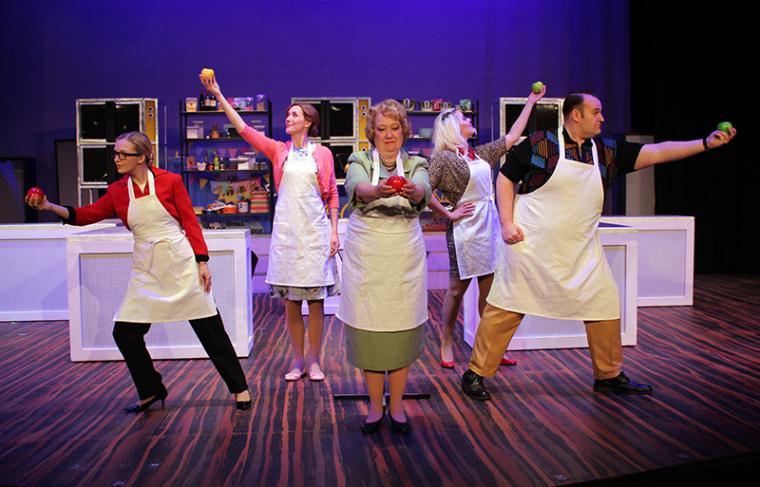 I won’t lie to you: I consider myself a bit of an expert when it comes to televised baking shows. If you’ve ever opted into watching one yourself, you can rightly assume that you’re in for a treat with the Circa '21 Dinner Playhouse's latest offering Just Desserts, its book and lyrics by Barbara Campbell and its music by Brad Ross. It's a musical about a bake-off – although I’d argue that the show's only truly memorable ditty was the aptly titled (and much reprised) title number. But I concede, during Saturday's performance, there wasn’t a song I recall disliking.

Director/choreographer Ashley Becher kept the stage picture sweet, and the five finalists in the Jefferson County Bake-Off were an amusing mix of quirky and familiar. The set for this televised bake-off, designed by Susan Holgersson, definitely plays off the many similarly themed TV shows one could opt to watch. Among my favorite details was the versatility of each baker’s work station – you never knew what they might whip out of them next. Kendall McKasson, who was in charge of the show’s props, took care to stock the pantry with a varied mix of items, although I did notice there were no stand mixers to be found, which was odd given the plot's whole competition aspect. (Good thing that no one had to actually make butter cream in this fictional bake-off!) And Jeremy Littlejohn’s lighting effects kept the stage looking great; I especially loved his use of purples and blues to make each workstation pop.

Just Desserts' county judges levied strict and fairly unrealistic time-lines for the tasks, and this, in addition to the flashy lighting, made the production seem a lot like TV's Nailed It. (Unreasonable time-lines aside, Circa '21's production, after all, is a musical, so the baking time has to fit into the length of a single song.) It struck me that Becher’s cast of characters had an almost unrealistic bond from the get-go, and therefore, the entire experience of Just Desserts felt like an episode of The Great British Bake Off – including the requisite “Ready, Set, Bake." 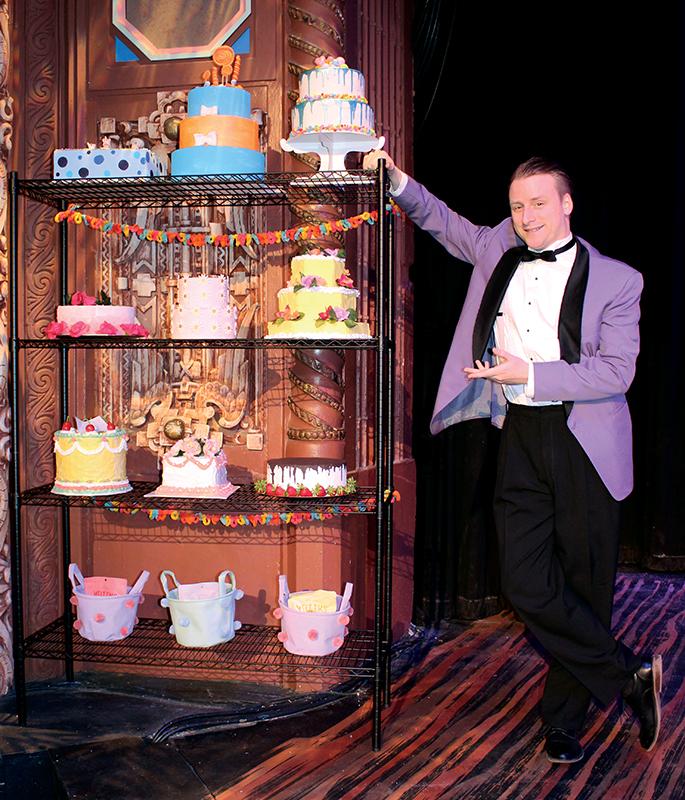 Unlike most reality-TV competitors, there was no “I’m not here to make friends” moment. In fact, Elsa Besler’s character Brandy explicitly states she was there to make new friends. Besler excels at playing the stereotypical overlooked, slightly gaudy blonde with a heart of gold, and she's dressed to the nines at all times by costume designer Gregory Hiatt. Turns out Brandy can not only bake, but she’s also, ultimately, a classy dame and good friend to her fellow finalist bakers, especially Sarah Hayes' Jean, the seemingly meek school nurse whose confidence bloomed as the competition progressed.

Becher’s cast collectively toed the line of ridiculousness with their characters, but they were always rendered in endearing ways, so the audience remained on their sides. The other competitors included Lou (Marc Christopher), a beefy Brooklyn transplant whose personality transitioned from brusque to benevolent. Mildred (Shelley Walljasper), the four-time defending champion, was perhaps the closest thing this show had to a villain – she certainly was opinionated on how things should go, and clearly desired another win.

And then there was poor Emma (Lexi Rae Smith), fresh out of business school and a long-time runner-up. Emma was dressed in an unflattering red-and-black suit that certainly stood out, and in truth, I had a hard time mentally justifying the suit sets Mildred and Emma wore, given that county fairs are most often held in the summer, and suits just aren’t ideal garb for working in a kitchen. (I’d also question having most of the ladies in pumps at an all-day baking competition and walking around a county fair during their break … But what do I know?) Plot-wise, I especially appreciated how bits of everyone’s back stories were unwrapped in fun ways that allowed the cast to explore their characters, the stand-out example being Emma's notable reveal in “Make It Big,” a number that showcases some great tap dancing. 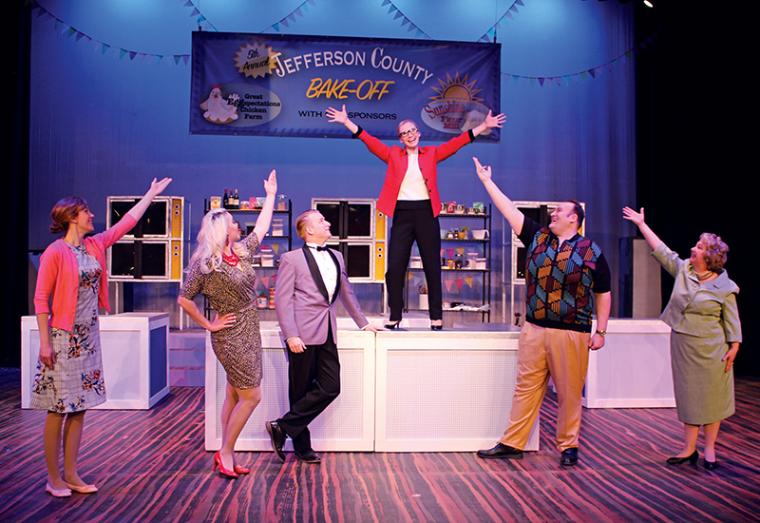 Not to be outdone by his competitors, Just Desserts' cast was rounded out by Bobby Becher’s Zack, the channel-93 weather guru and competition host. Zack was eccentric in a lovable way, and props to Becher for unabashedly appearing to relish his time on stage; the actor's enthusiasm was simply contagious. I especially enjoyed how it made sense for Becher to encourage the audience to clap along with, and occasionally cheer on, the competitors. (This wasn’t quite audience participation, but it was engaging.) Assisting Zack was Benjamin Elias Nickols as the announcer/stage manager, and while we didn’t see the performer often, his presence was good for a chuckle whenever we did.

Just Desserts is a sugary little romp of a show. Sure, the ending is a tad predictable, but so are most actual baking competitions, so it doesn’t matter in the slightest. Director Ashley Becher’s friendly production looks great, sounds great, and I recommend ordering a dessert to show up at intermission so your time watching spent in the audience can taste great, too. After all that talk about baked goods, you might really want one.

Just Desserts runs at the Circa '21 Dinner Playhouse (1828 Third Avenue, Rock Island IL) through May 14, and more information and tickets are available by calling (309)786-7733 extension 2 and visiting Circa21.com.