Summer Livin', Had Me a Blast: “On Golden Pond,” at the Richmond Hill Barn Theatre through April 14 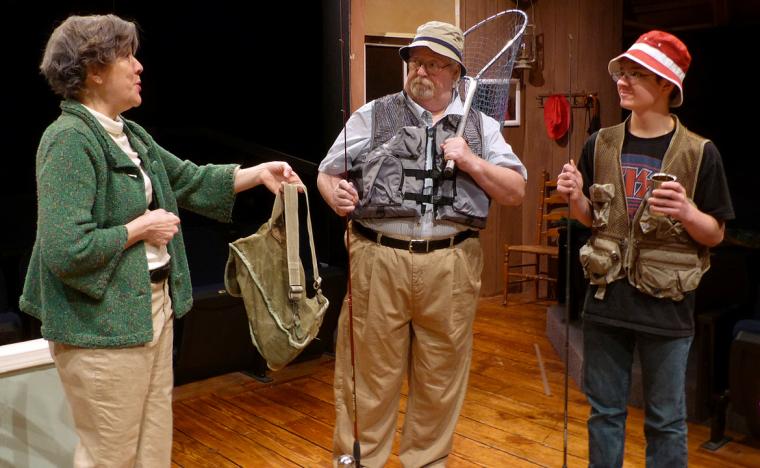 Stepping into the beautiful Richmond Hill Barn Theatre is always a pleasure, with the warmth of the rustic wood floor and walls, comfortable seats, and professional-grade technical equipment creating an expectation of a fine dramatic experience. The current On Golden Pond delivers. This intimate theatre-in-the-round venue is an ideal one to stage Ernest Thompson's play, which takes place in 1979 and was adapted for film in 1981, and the production is helmed by experienced director/actor Harold Truitt, run by an adept crew, and carried by an amazingly accomplished and skilled cast. There are no neophytes here.

On Golden Pond's idyllic, summer home of Norman and Ethel Thayer, a 48-year residence brought into vivid being by builder and stage manager Mike Skiles, is dressed cozily with an eclectic assortment of furniture and mementos. Jennifer Kingry’s straightforward lighting and soundscape slide smoothly into the show’s action, and as there can be no backdrop in this space, sound must help carry the serene atmosphere of the house by the pond. The music serves well to transition during scene changes.

Area-theatre mainstay John VanDeWoestyne brings the requisite humor and drama to his portrayal of Norman. The script gives him many of the best lines, and it would have been easy for VanDeWoestyne to let the words carry the role – but he does not. His nuanced performance brings out the character’s shrewd professorial persona, as well as Norman's qualities as a blunt man uncomfortable with sentiment and learning to cope with aging. 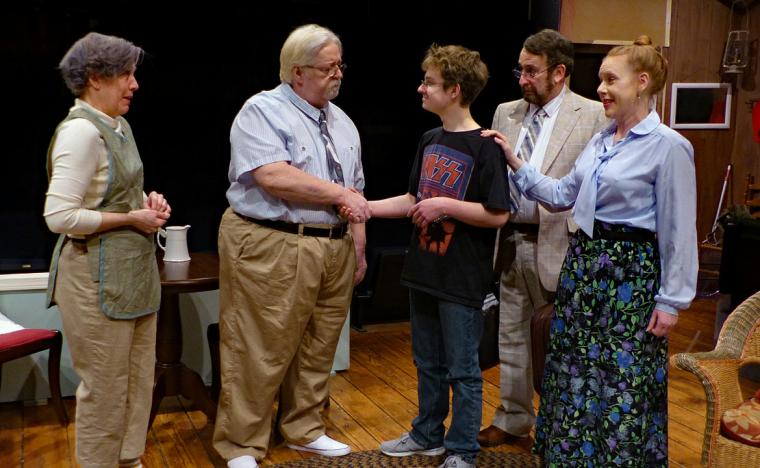 Another local favorite, Jackie Patterson, is an engaging Ethel. She orchestrates (and participates in) the clan’s activities as energetically as she battles the bugs infiltrating the house, and in doing so, Patterson creates someone I’d like to personally know. Patterson's Ethel puts family and guests first with cheer and affectionate exasperation, and when she expresses her deeper emotions, it’s appropriately jarring. Remember the first time you realized your mother was actually human, and not just a pleasant personal cook and cleaner?

Steve Trainor plays family friend Charlie – not a main character, but an authentic Maine character; his “Ayuh”s are the most natural I’ve heard from a non-native. I had only known Trainor as a journalist, but in fact, he’s also an actor with a weighty résumé, and his honest, film-worthy portrayal of a simple man with a big heart is delightful. Ann Keeney-Grafft, meanwhile, is the couple’s only child Chelsea, who hadn’t visited in years. After her hello hug with Ethel, Chelsea's demeanor subtly charges their initial joy with tension. I felt her wanting to make awkward situations pleasant as a competent adult while still not being able to let go of her bitterness over childhood trials, and Keeney-Grafft embodies these conflicts admirably.

Gary Talsky serves up broad comedy as Chelsea’s partner Bill, a man as frightened by unknown dangers in the woods as he is by the known danger in the house. (That would be Norman.) In his first scene, however, a slow build from suppressed fear to nervousness to indignation might have been more effective, because after Talsky bursts in loud, wild-eyed, and frantic, there’s nowhere for him to go emotionally. And Joe Mroz, as Bill’s son Billy, is as natural and unpredictable as a 13-year-old should be. He is smart, cheeky, and just plain fun to watch, and in his few short scenes, Mroz holds the stage as an equal to the adults while bringing fresh life into the house as a character. I expect more wonderful performances from him. 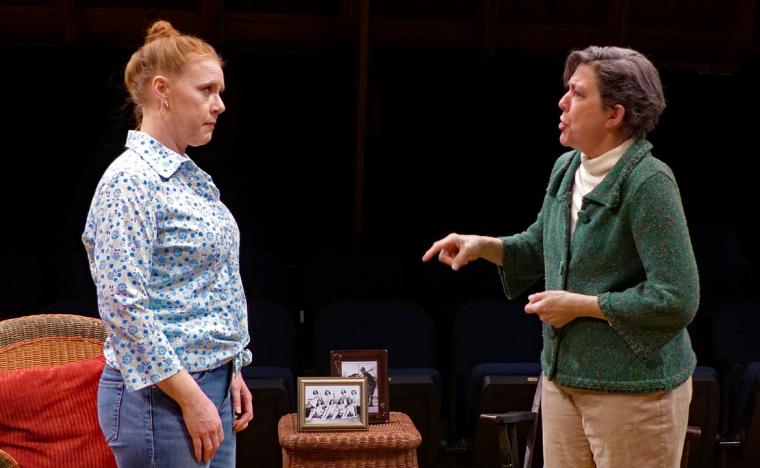 The production’s staging and energy are smooth and cohesive; nothing feels out of place, even though the first scene with Ethel and Norman was paced a bit slow for my taste, and could benefit from faster cue pickup. But being surrounded by audience members in a theatre-in-the-round setting is a difficult directing, acting, and set-design challenge, and everyone on Friday night met it well. For the most part, the actors’ diction and volume were also excellent overall, although my play-going companion and I missed a few lines when the actors were facing away from us or speaking with their heads down.

Some theatre owners boast “There’s not a bad seat in the house,” but it really is true at the Richmond Hill Barn. While it’s impossible for every audience member to see every moment on stage, the actors are so near that you won’t miss much no matter where you sit. My college theatre professor Mike Kennedy taught us that to be a theatre professional is to adhere to a mindset – the practice of commitment, responsibility, courtesy, and pride in, and dedication to, the craft – whether paid or not. In this way, the many volunteers who facilitate the shows at the Barn are entertainment professionals. Your stay On Golden Pond will be a fulfilling one.

On Golden Pond runs at the Richmond Hill Barn Theatre (600 Robinson Drive, Geneseo) through April 14, and more information and tickets are available by calling (309)944-2244 or visiting RHPlayers.com.