Super Pach: "Elephant’s Graveyard," at the Village Theatre through May 14 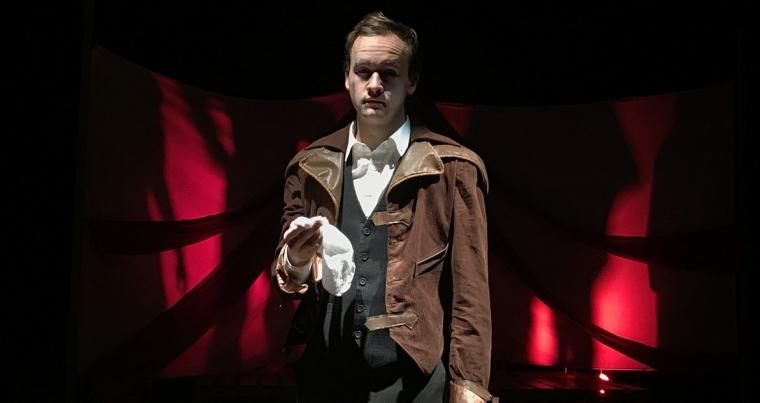 Considering its real-life tale of the 1916 lynching of a circus elephant and the event’s effects on those who either demanded or protested the execution, playwright George Brant’s Elephant’s Graveyard could rightly be labeled a drama. But it’s more accurately a horror story, and as evidenced by New Ground Theatre’s and director Debo Balogun’s electrifying presentation, that horror doesn’t come from a momentarily out-of-control pachyderm; it comes from human beings, from us, and our own worst impulses. You may, and likely will, shudder when hearing how the elephant Mary crushed her abusive rider’s head – intentionally? – with the weight of five tons. That recollection, however, pales next to the terrifying image of a girl giddy with delight about the beast’s impending fate, or the circus ringmaster admitting, with not quite enough regret, what he eventually did with the corpse.

All this might make Elephant’s Graveyard sound too wrenching to bear, and the sniffling in the May 6 crowd hinted that a few patrons, toward the finale, were just barely bearing it. Yet while I, too, shed tears, the overall thoughtfulness, passion, and power on display enabled me to leave New Ground’s season-opener feeling utterly spectacular. With more than two-thirds of the 15-person ensemble currently attending Augustana College, Balogun’s directing debut nearly explodes with the dynamism of young talents tackling demanding material they’re clearly in love with. And with all that enthusiasm accompanied by tech elements this striking and staging this confident, it’s probably no wonder the show emerges as such a thrillingly satisfying heartbreaker. Perusing the program, I was surprised and touched to see my name included among those given “special thanks,” presumably for writing a preview article on the show a couple weeks back. Happily, it’s now my turn to offer special thanks. 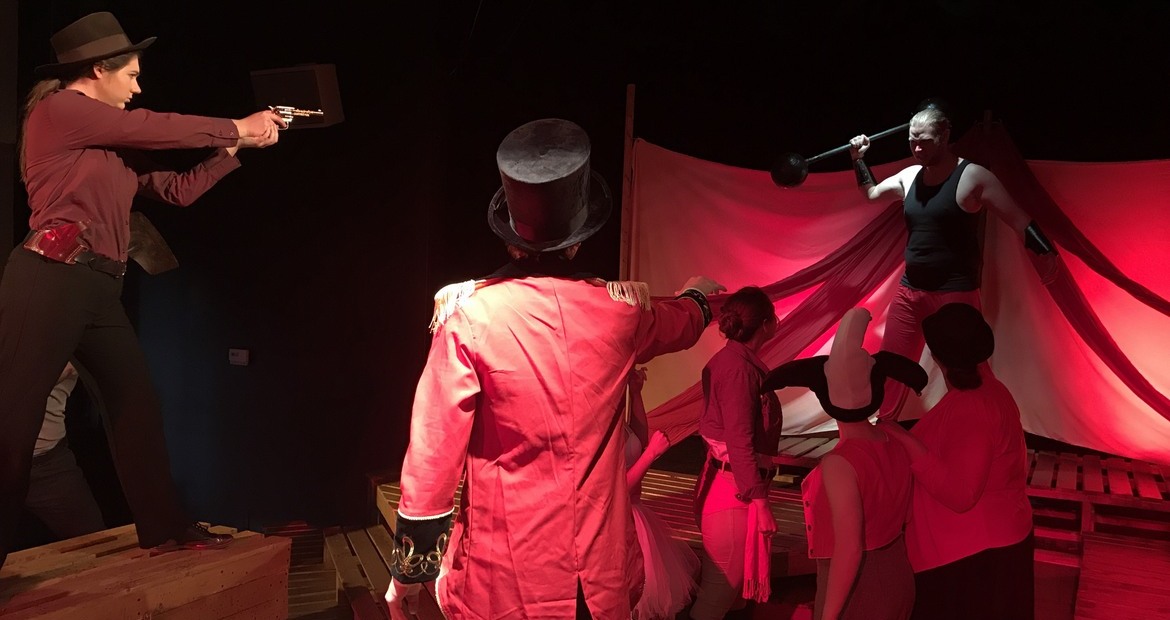 As it tells of the once-renowned Sparks Circus arriving in rural Erwin, Tennessee, and leaving minus its star attraction, Brant’s 2007 work unfolds over 80 minutes composed mostly of monologues, albeit with lovely, live music courtesy of guitarist Sam Dunklau and drummer Glenn Kluge. (Inventively, the duo also provides substitution for gunshots, chugging locomotives, and the like.) Rest assured, however, that this potential debate night with acoustic accompaniment absolutely looks, sounds, and feels like a fully produced play. Hell, given Emma Brutman’s rustically evocative scenic design and Shannon Ryan’s first-rate costuming, it practically feels like a movie, and moves like one, too. Barring the minor exceptions of circus folk entering and leaving Main Street, and the major exception of the finale’s incremental exodus, the entire cast remains on-stage the whole time, allowing Brant’s monologues, aided by Balogun’s rich lighting effects, to blend seamlessly into one another. Better yet, the group compositions let us watch both the speakers and those listening simultaneously, and when treated to actors this compellingly focused – especially in the astounding 15-minute sequence of them witnessing Mary’s slow, agonizing death – you don’t want to be deprived of anyone’s presence for even a moment.

Maddie McCobb’s engineer serves as the proceedings’ stoically impenetrable Big Brother, with similar steeliness provided by the equally assured Melina Herman as Erwin’s vengeful marshal and Angelina Fernandez as the circus’ practicality-minded tour manager – the latter’s deadpan and blunt, clipped exit lines revealing everything seemingly knowable about her internal conflict. Portrayals of anguish leading to greater, more inconsolable anguish are delivered, impressively, by Maddy Causay as the preacher who knows her townsfolk perhaps too well, and Emily Mason as the grieving elephant trainer who, you sense, will never forgive herself for kowtowing to company demands. Playing circus employees whose bonhomie irrevocably morphs into despair, Aubrey Lyons (the clown), Joshua Malone (the strongman), and Muriel Melgoza (Mary’s “ballet girl” accessory) are understated and moving as professionals who clearly love their jobs until there’s finally no love left. 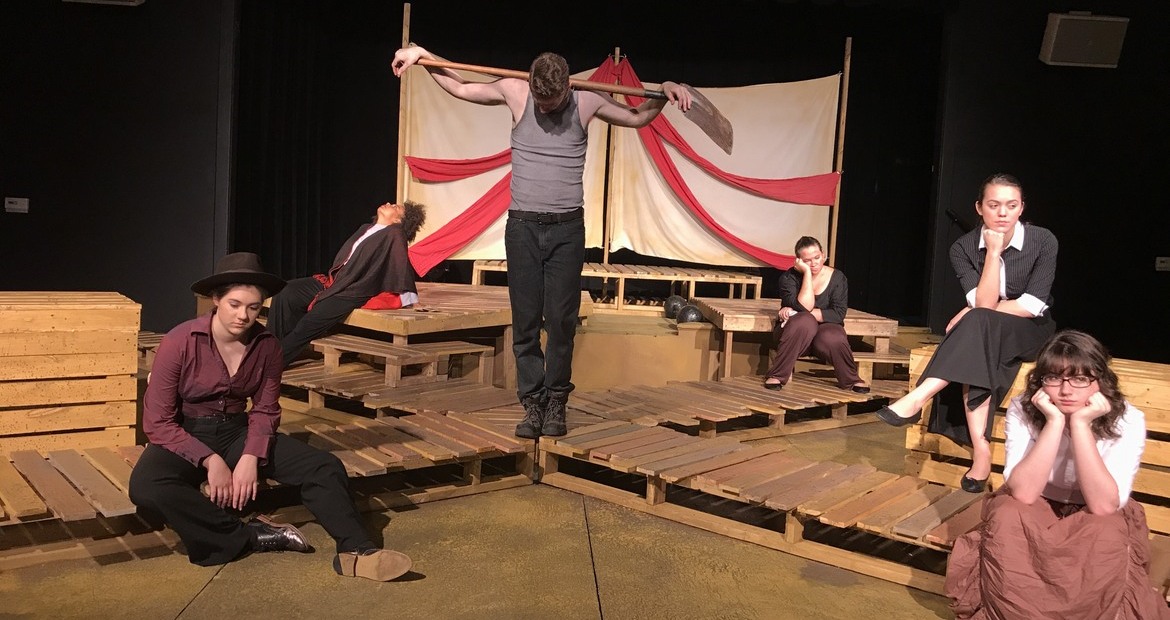 Elephant’s Graveyard, though, turns truly frightening, and ultimately devastating, in the forms of its angry, entitled citizens of Erwin, and in the ringmaster malignantly wed to the maxim “The show must go on.” While Brant’s writing is strong throughout, he’s rarely better than when detailing the gleeful thirst for retribution that built in the wake of the circus-parade tragedy, and Cheyenne Powell, Elise Campbell, and Jacob Pecaut are masterful at demonstrating the unconscious evil of a “civic-minded” demand for justice that’s really just barely disguised hate. (I’m haunted by the image of Pecaut, covered in grime, and his malicious, pre-lynching sneer.) Tristan Odenkirk’s ringmaster, meanwhile, would be unsettling merely through Kaylee Stewart’s superb makeup design, which suggests a rip in the man’s face mask exposing the grim specter beneath. But Odenkirk proves just as chilling as his look, with his smile – like that of Cabaret’s Master of Ceremonies – growing subtly yet perceptibly more sinister whenever he’s feeling particularly subversive, as when recalling the ugly demise of Ringling Bros.’ beloved elephant Jumbo.

Yet all of these figures end up paying, at least emotionally, for their bloodlust and hubris. And standing amidst them is the voice of conscience beautifully played by Kamille Brashear, who marvels, with an almost poetic resignation, that her fellow Erwin-ites could be so affected by the lynching of one elephant without batting an eye at the lynchings – in their very own town – of dozens of African Americans. It’s Brashear’s character who sees the complete nightmare, the national nightmare, of Elephant’s Graveyard. But thanks to Balogun and his exquisite collaborators, we get to see at least a bit of it, as well. In their fantastically capable hands, it’s a nightmare that, for theatre lovers, more closely resembles a dream.

Elephant’s Graveyard runs at the Village Theatre (2113 East 11th Street, Davenport) through May 14, and more information and tickets are available by calling (563)326-7529 or visiting NewGroundTheatre.org.