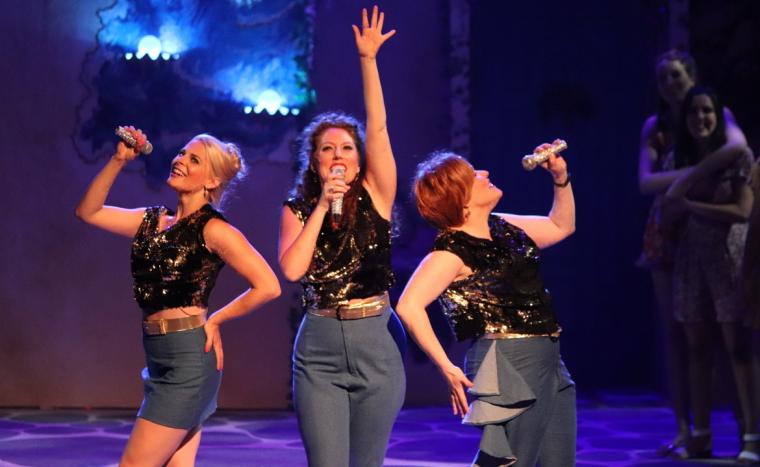 You know ABBA, right? The 1970s pop group, beloved worldwide, wrote and recorded the catchiest tunes this side of Lennon and McCartney? The Swedish foursome were all over the airwaves, and still are, and their body of work was the springboard that launched the musical Mamma Mia! The Timber Lake Playhouse is running its spectacular production of the show now. Grab a seat before they're gone.

Mamma Mia! debuted in 1999, and is the ninth longest-running show on Broadway. It was adapted for film in 2008, and the sequel Mamma Mia! Here We Go Again was released last year. But until Thursday's opening night performance, I'd never seen this show. Catherine Johnson wrote the musical's book, Benny Andersson and Björn Ulvaeus – the Bs in ABBA – wrote the music 40-some years ago (probably not imagining it would be taken to the stage), and Ulvaeus was the main lyricist, with Andersson and their manager Stig Anderson contributing.

Shane Hall both directed and choreographed Timber Lake's production, and my my – he has been very busy. Directing a big musical is a major undertaking in itself, and the dancing … . Well, I'll get to that later. Michael McBride ably handles the vital jobs of music director and conductor, as well as playing keyboard in the six-piece orchestra. Kristina Parker was the sound designer, and costume designer Katelin Anderson put together multiple outfits for more than two dozen people.

This Mamma Mia! set, designed by Whitney Lehn Meltz, is both stunning and practical. It's a 360-degree turntable piece comprised of iconic, white, Greek-style curved walls and steps and blue accents (here, more turquoise than cobalt). And lighting designer Cameron L. Strandin crafted complex setups for the dramatic scenes, as well as the big dance numbers. (Have I mentioned the dancing yet?)

Most of these songs were already hits – the show's creators just needed a storyline to encompass them. I wasn't expecting a great plot. Though it was more engaging than I'd imagined it would be, parts of the script were a bit weak, and while there were good lines and scenes, the story could've been told more effectively – and English author Johnson put a bit of Brit-speak into the mouths of American characters. (Tsk, tsk.) Nevertheless, the cast's excellent acting elevated the so-so material. The words aren't paramount in this show, anyway, just as nobody listens to ABBA for the lyrics – it's the band's melodies and singing that make it popular. And this cast can sing; hearing ABBA's hits live, performed by strong voices with astounding ranges, was exhilarating. Some audience members even sang along, which is normally poor theatre etiquette, but the management here almost encourages it.

The first company number, "Money, Money, Money," made me sit up and smile. The dancing during all the up-tempo hits was lively and captivating, and so much activity was packed onto that stage that sometimes there were more moves in a measure than there were beats. Ensemble dancers put fun little twists on the steps – a shoulder pop, a nod, an extra kick, a bit more hip. I also enjoyed the men dancing seductively, given that oftentimes, only women are required to be provocative onstage. (More gyrating guys in area theatre, please!) Director/choreographer Hall has helmed many musicals and runs a dance center, and I wish I had a tenth of his obvious talent and energy.

That wish goes for the entire cast, in fact, and there aren't words enough to give them all the praise they deserve. Kaitlin Lawrence, the "mamma" in Mamma Mia, and Lara Hayhurst and Mia Fryvecind Gimenez, who play her friends, completely dazzled me. Lawrence has lots to do and she does it all brilliantly; I'd like to be her when I grow up. For her part, Hayhurst is the best physical comedian I've ever seen live. Her "Does Your Mother Know" with Logan Dolence and the ensemble, was so delightful I never wanted it to end. And Fryvecind, with Darren Mangler, performs a very entertaining "Take a Chance on Me." In this number, her character is not a supplicant as the lyrics might suggest, but a dominant woman who is not asking – she's telling. These three women should tour together. And Mangler, James Tweedale, and Andrew Varela – who also log a lot of stage time – are appealing and manage both drama and comedy with ease.

One slightly disappointing aspect of the production, however, would be the low-level sound on the backstage singers, as I had to strain to make out the backing vocals during some numbers. The "ahs," "oohs," "uh-huhs," and "su-per-per trou-per-pers" are integral to the tunes, so let's hear them!

Though I enjoy ABBA's songs – and there are 22 of them in Mamma Mia! – I avoided the movie for two reasons: I thought the contrived premise might spoil the music for me, and I'm not a fan of all-star casts. (It's hard for me to suspend disbelief when I know the faces so well.) Now, though, I'm a big fan of this cast, who are not all stars – but with this amount of talent, they all should be.