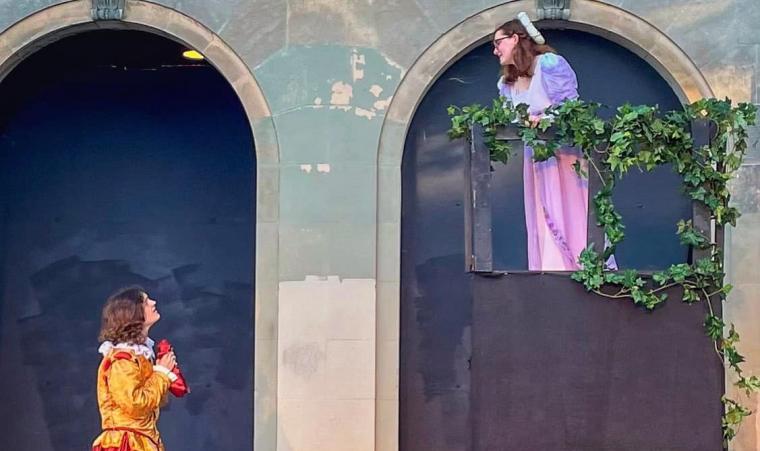 Romeo & Juliet is one of William Shakespeare's best-known plays – "most often heard of," I mean, because many don't actually know it.

Some call it the "greatest romance of all time" (they've not seen it); others know it's about "star-crossed lovers" (apparently doomed due to their horoscopes). Will, though, based it on a poem: The Tragicall Historye of Romeus & Juliet by Arthur Brooke, published about 35 years prior to his script. (Copyrights didn't exist back then.) Anyway, if you haven't seen Romeo & Juliet, whatcha waiting for? Genesius Guild is currently presenting it. And if you have seen it, whatcha waiting for? There are some skilled, dedicated actors in this production. As director Kitty Israel explained before Saturday's show, all of its cast members are ages 18 and under. Additionally, this version has been adapted with about 45 minutes trimmed, characters dropped, and lines reassigned.

Still, the Montagues are again feuding with the Capulets; we're talking bloodshed in the streets, not Twitter wars. Charles Budan, as Romeo Montague, exhibits all the fervent ardor one expects from a love-tormented rich boy. He's crushing on a woman who has taken an abstinence pledge. Caleb Schroeder plays his buddy Benvolio as a stoic, no-nonsense, yet sympathetic sort. A Capulet servant unknowingly tips the first domino of tragedy by asking Romeo to read a party guest list. Benvolio talks Romeo into crashing the bash to find an even hotter hottie than his current obsession. (They can crash because it's a masked ball – and not masked because of a plague. It's more of a cosplay thing). Boneheaded move, Benvolio. You're encouraging a Montague to find love at a Capulet party? Well, congrats, dude. He will. 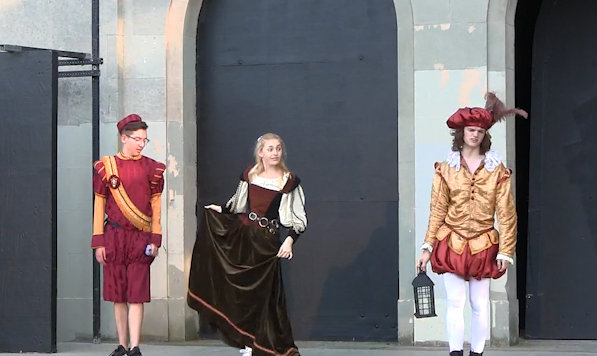 Miranda Croll's Juliet Capulet (Mom and Dad should've thought that one through) is shy, smart, and politely defiant to her mother Lady Capulet (played with impressively serene, privileged dignity by Claire Henniges). Mother wants her to marry some guy she hasn't even seen yet, but Juliet is not having it. She's 13 and a virgin, but leans humorously on her reference to "any part belonging to a man" in her balcony reverie. She already knows way too much about making the beast with two backs thanks to her devoted, dirty-minded Nurse, played by Olivia Akers. Part of the humor inherent in the Nurse is that she's old; the equivalent of a rapping granny. However, Akers doesn't play age here. She's a wildly scurrying, shouting fireball who also evokes laughs with subtler acting, and she's got timing and fearlessness. I'm not saying that Akers is the reincarnation of Lucille Ball or Gilda Radner – but I'm also not saying she isn't.

Bella Kuta is Mercutio, a cheerful, likeable friend of Romeo. I particularly enjoyed her Queen Mab speech – a random fairy story that's hard to play, in my opinion. But Kuta made it seem natural, as if she were simply trying to distract and entertain a morose Romeo. Mae Dolan, as the Capulet Tybalt, struts boldly and projects menace with every entrance, while Friar Lawrence is played by a low-key Geno DelPreore, whom I wished, on opening night, had taken a little more time when he spoke. (The Friar is a vital part of the plot, so I say: Own it!) Meanwhile, Emily Wichelmann, Adie Craig, Lindsey Gerlach, Nathaniel Honts, Jennifer Weaver, and Haley Woolley give their smaller parts care and attention. The "bite my thumb" bit, for example, is a nice kickoff to the play.

When Romeo speaks of Juliet, it's such a contrast to his dewy-eyed yearning for his previous crush. He turns exuberant and endearingly goofy – if there were a couch, he'd have been jumping on it. Budan's anger is effective, too, just as Croll's torment is subtle and realistic. Interesting staging here: In the original script, Juliet lifts a dagger from Romeo's body to end her life. Here, the knife is handed off from character to character over time, and ultimately, she takes it from the belt of a nearby cleric – a neat way to underscore the culpability of nearly everyone in creating this tragedy. 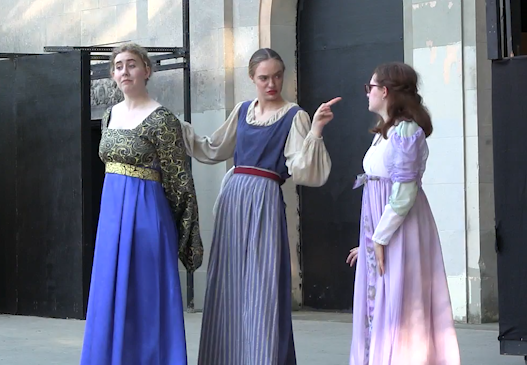 In this Romeo & Juliet, the performers' physicality is striking. Most use their whole bodies confidently, as if they belong on this stage (which they absolutely do). And on Saturday, all the actors, whether they had 100 lines or five, boasted impeccable diction, especially considering the Elizabethan English we don't speak today. I was also impressed by their projection. This outdoor theatre has no walls to bounce voices off of, and there's ambient noise from the park. Yet most of the ensemble spoke audibly, naturally, and conversationally (except the Nurse, who, in this production at least, just can't). Voices can't win a fight against a train, though; unfortunately, some lines were lost to its horn near the play's climax. And while it effectively aids transitions from scene to scene, the music underscoring dialogue was too maudlin for my taste.

Riley Scranton's spare, black, angular set is enlivened only by the balcony greenery, with the eye candy here – the appealing costuming – provided by Shannon Ryan and assistant Courtney Wehmeier. I noticed that after intermission, Romeo's initial explosion of hair had become a man-bun, and Juliet's hairdo was changed twice, and by different characters. Loose hair, in Israel's presentation, seems to mean innocence; bound hair, maturity.

My delight in this production of Romeo & Juliet was largely because of the potential simmering in its wonderful cast. I hope they keep performing. They deserve big audiences, and you deserve to see these talents in action.