Tainted Love: The Prenzie Players’ “The Merry Wives of Windsor,” at the QC Theatre Workshop through November 23 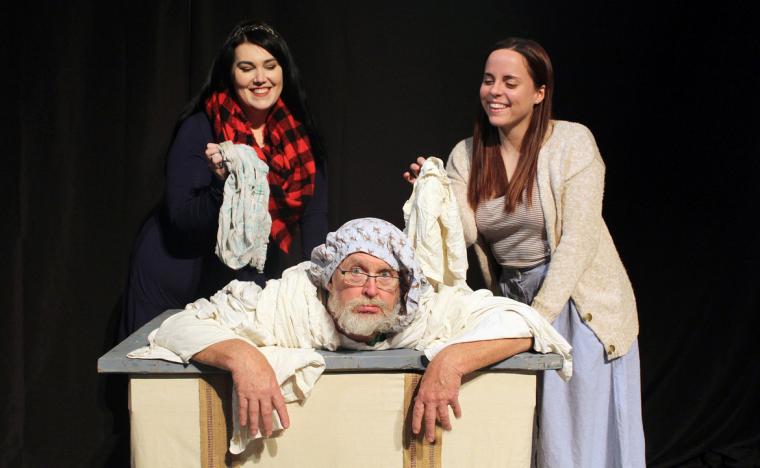 Kitty Israel, Michael Carron, and Emma Regnier in The Merry Wives of Windsor

If you have a preconceived notion that William Shakespeare plays are uppity, pretentious, or hard to follow, then you need to get yourself over to the QC Theatre Workshop this weekend to see the Prenzie Players’ current production of The Merry Wives of Windsor. Friday’s opening night of this hilarious romp was just so much fun that it’s hard to properly articulate all that made it so. That’s not, however, going to stop me from trying.

In The Merry Wives of Windsor, John Falstaff (Michael Carron) is short on money, so he decides to simultaneously woo two rich women, Mistress Page (Kitty Israel) and Mistress Ford (Emma Regnier), sending them identical love letters. As both women pretend to heed his advances, their husbands catch wind of Falstaff’s intentions, and while Master Page (Elliott Frieden) trusts his wife, Master Ford (Reader employee Nathan Klaus) lets his jealousy get the best of him. Meanwhile, Mistress Anne Page (Annie Mitchell), the lovely daughter, is concurrently wooed by three different suitors, though she truly loves only one.

Director Jake Walker’s production worked in many ways, not the least of which are the marvelous women he cast as the titular Merry Wives. The always wonderful Israel excels as Mistress Page, her steady nature, occasionally stoic wit, and excellent delivery making her absolutely captivating. Israel and her counterpart Regnier a completely believable Lucy-and-Ethel friendship as Mistress Page plotted and Mistress Ford awkwardly went along with her role in the plan. Regnier, here, is masterful at playing out comedic unease, from carrying a box of Franzia wine to her buoyantly hilarious facial expressions, making the pair’s chemistry a dream to watch. So much so, it made me wonder why, in a world where filmmakers seem incapable of generating original stories, no one has thought to give these Merry Wives a fresh, big-screen adaptation. In all likelihood, it's because they haven’t seen Israel and Regnier inspire them to do so.

Attempting to woo these fabulous ladies was Carron’s Falstaff, sporting a padded belly that bordered on ridiculous. Admittedly, there were times in which I lost track of what Carron was saying because I was anxious to get back to the show’s more humorous moments, and Falstaff’s hefty character seemed a bit whiny to me. His best interactions were with Klaus’ Master Ford, especially when Klaus was fidgeting with his mustache, though the highlight for both actors came intermingled with dirty laundry. Rarely are escapades involving laundry comedic home runs as they were in this production. The premise of two grown men climbing into a laundry basket at different times doesn’t seem like one that would elicit hearty guffaws, but these over-the-top moments played brilliantly and, in a night not lacking in laughs, drew some of Friday’s greatest. 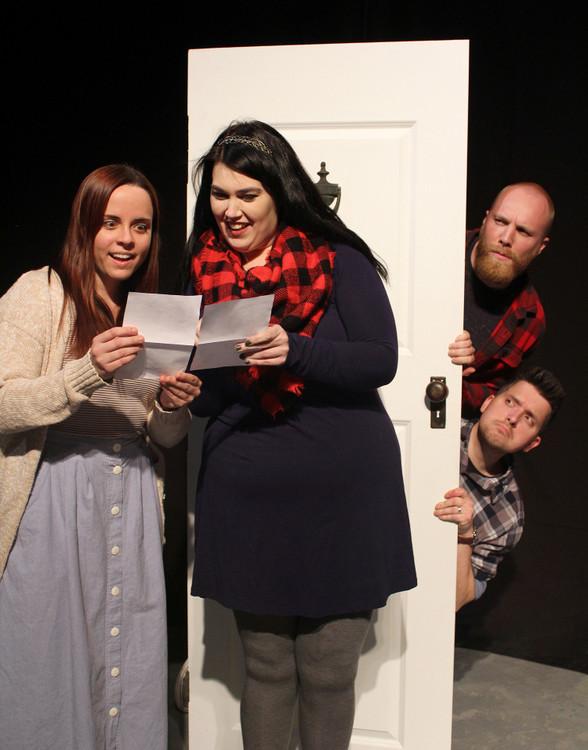 Meanwhile, the Prenzies hit on more serious matter while executing the subplot of who would win the heart of the young Mistress Page. Mitchell’s Anne Page was given the romantic choice between Noah Stiver’s sweet Slender, Mischa Hooker’s over-the-top, French-accented Doctor Caius, and the more straightforward Mistress Fenton played by Mattie Gelaude. Here, rather than simply cast the opposite gender, Prenzie opted to change the gender of the character altogether. This brought a somewhat more serious overtone to Anne’s parents’ disapproval of their relationship and ultimately became more of a statement that love is love. Nevertheless, Frieden’s depiction of Master Page was an overwhelmingly successful Prenzie debut and, hopefully, we will see more of his formidable talents in the future.

From a technical standpoint, it was refreshing to see bright colors in the set and costumes, a departure from the Prenzies' traditional dark, neutral palette. Set in a Windsor courtyard with a green-grass floor was a gold fountain surrounded by benches and four distinct corner entryways. I especially liked the detailing in that the doors of each couple’s home matched their costumes, with the Fords in blue, and the Pages in buffalo plaid.

The downside of the stage set up was that the offstage portion of the theatre was draped in black fabric, and occasionally an actor rushing to their next entry wasn’t super-stealthy about it. But that was easily overlooked, and while there were a few opening-night mishaps – wine spilled when a carafe was inadvertently knocked over, some draping accidentally pulled down – these snags didn’t detract from the great fun.

There was also a particularly charming moment in which the cast transformed the courtyard into autumnal woods, throwing leaves and decorating the fountain with branches – a sequence set, amusingly, to an instrumental version of the song “Autumn Leaves.” Walker’s entire cast seemed to enjoy themselves immensely during this bit, and it was a feeling, I believe, was shared by the audience, as well.

Arguably as close to a romantic-comedy romp as Shakespeare gets, The Merry Wives of Windsor was a feast of un-stuffy pre-Thanksgiving goodness, and I’m incredibly thankful I was able to see it. The timeless wit is as relatable in today’s world as it was centuries ago – and it’s definitely not a production to be missed.

The Merry Wives of Windsor runs at the QC Theatre Workshop (1730 Wilkes Avenue, Davenport) through November 23, and more information and tickets are available by visiting PrenziePlayers.com.