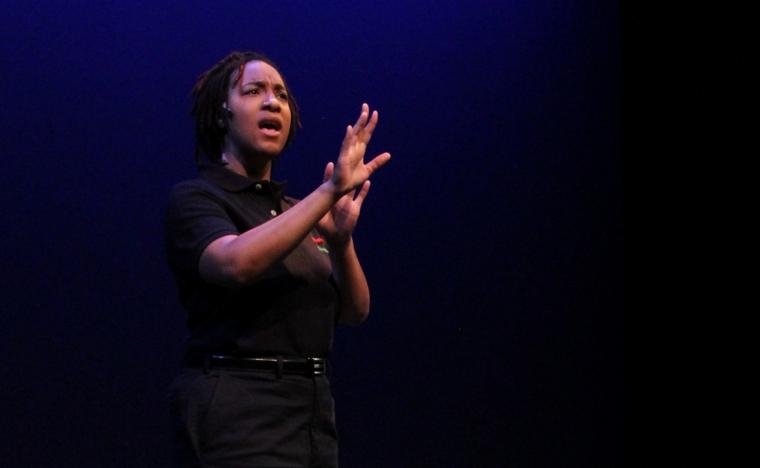 Jalyn Greene in No Child ...

The summer is obviously flying by, as the final show of the Mississippi Bend Players' season – Nilaja Sun's No Child … – just opened at Augustana College's Brunner Theatre. I was there for Thursday's opening night; there are only three performances left, and you have got to see it. This show’s structure is unusual, the topic relatable, and the performance exceptional.

No Child... has a familiar premise that we've seen on screens big and little, as well as in many books: the passionate teacher confronted by a passel of indifferent or difficult students. Sun's script was based on her own experiences as a teaching artist in schools in the Bronx, and is unusual because it was originally written (as performed here) for one actor who plays more than a dozen characters. This particular production is outstanding because that one performer, Jalyn Greene, gives the work an immediacy and vitality that could not have been achieved with conventional casting and staging.

Before I get to Greene, a bit about the play. It debuted off-Broadway in 2006, won an Obie Award, and its title refers to the No Child Left Behind Act of 2001, a much-criticized law requiring schools to give standardized tests in order to receive federal funding. (It was repealed 14 years later.)

Director Sydney Chatman's pre-curtain audio recording includes the song "Lift Ev'ry Voice and Sing," which boasts lyrics by a school principal, and which is often called the "black national anthem." It also features an excerpt from the Malcolm X speech "Who taught you to hate yourself?" (The show's fictitious high school is named after him.) 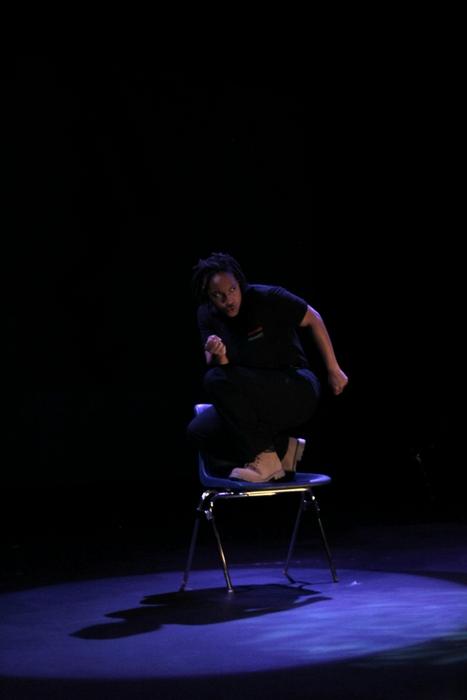 Mr. Baron, this school's long-time janitor, is the show's narrator. When the lights come up, you can see the push broom in Baron's hands – and it's a mimed broom, not a real-life prop. This is the first instance of how Greene makes things real throughout the entire play, populating the stage with all those characters, solo, and with no costume changes.

Sun, a teacher, is at the center of No Child … , and the tale gains the status of an ageless legend because Baron is the observer. If Sun related her own experiences, it could come off as self-glorifying. And while the plot does revolve around her, the play's most important characters are the kids.

They are 10th-graders, and like most teens of that vintage, they are not shy. (Except, that is, for Chris, the nerd – and what class would be complete without one?) These eight students each have a distinctive voice, speaking manner, posture, and gestures. Greene switches between them instantly and deftly, and, like the most skilled performers, is able to make us see everything with only voice and body. I could visualize the whole class as they gathered around Sun – or as they left the classroom because her little project was "mad boring."

What little project? Well, Sun is also an actor – a tough profession to make a living at anywhere, not just in the Bronx – and her goal is to get her class, over a mere six weeks, to perform Our Country's Good. (That's a real-life, Tony-nominated play, and its title can be interpreted two ways, each way with two moods: positive or wry). No Child … consequently deals with serious issues and highlights some wrenching truths, including the desperate living conditions the kids face, the poverty of teachers (and actors), and the lack of support on all fronts, which might make their situations seem hopeless. This show, however, focuses more on humor than tragedy. 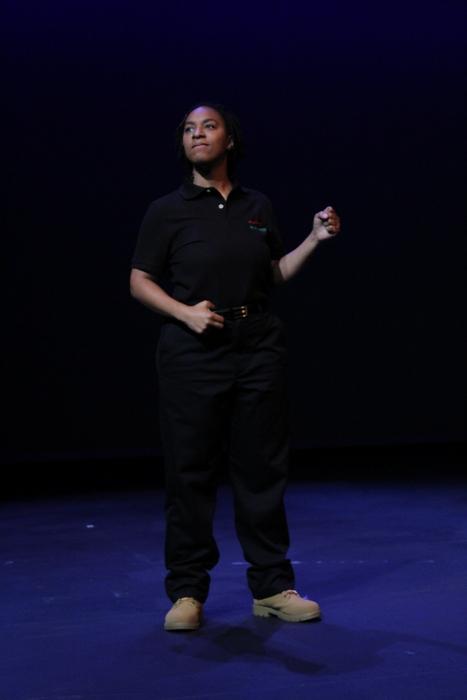 Ms. Tam is one of its funniest characters: a chirpy, nervous young teacher whom the students call "shrimp fried rice." This, by the way, is the mildest of the derogatory terms the kids hurl in No Child … . (It's not a show for the youngsters.) Coca is another of my favorites, as she voices her protestations and often-contrary opinions frequently, but still manages to be charming. And Jerome is an equally vocal – and likeable – mover and shaker. I could happily spend an evening just watching these two students.

Though Chapman's staging is minimal, it helps the believability and rightly makes Greene the focus. Scenic and lighting designer Cameron L. Strandin dotted the stage with some institutional-style chairs, mostly for effect and not practical use, and his lighting is effectively employed to illuminate Greene's transitions between scenes and characters, just as cuts are used in film. (Helping to distinguish the play from the play-within-the-play is the backdrop, which is only lit during the students' performance.) Sound designer Sammy Ramont's effects, meanwhile, are used sparingly and organically to evoke a high-school atmosphere, and enhance the ambiance without being distracting. Sound board operator Roger Pavey Jr. and light board operator Riley Scranton put these elements into play smoothly and professionally.

Like playwright Sun and director Chatman, Greene is an arts educator and advocate, and I can't imagine a more fruitful way to spread theatre-in-the-classroom principles outside the classroom than by staging No Child … . People should see it, bring their friends, talk about it … and perhaps even work toward its goals.