These Boots Were Made for Ravin': "Kinky Boots," at the Circa ‘21 Dinner Playhouse through March 14 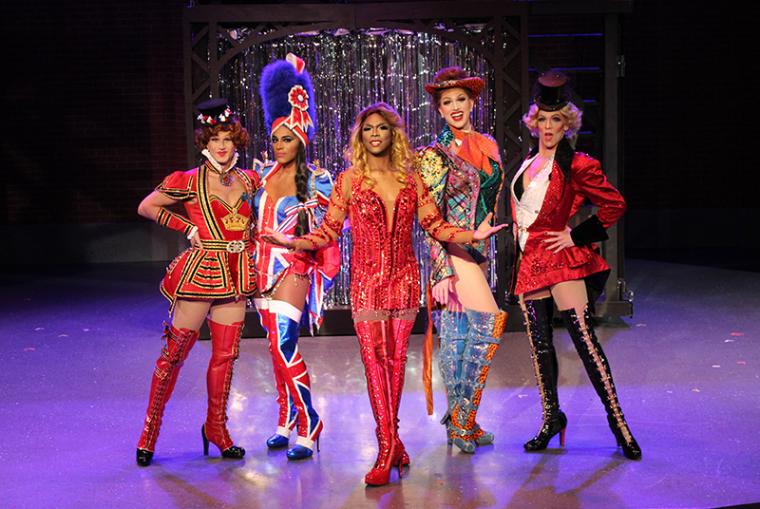 With a rather evocative title such as Kinky Boots, you may find yourself a tad wary of the Circa '21 Dinner Playhouse's latest production. But bring that wariness in and let director M. Seth Reines and his talented cast broaden your scope. Kinky Boots, you see, is an exciting, engaging story for everyone and about everyone.

This story, with its book by Harvey Fierstein and music and lyrics by Cyndi Lauper, follows Charlie (Michael Penick), a young man who unexpectedly inherits his family’s floundering footwear business. Charlie must figure out a way to keep the failing shoe factory open, and does so by teaming up with an unlikely new friend to create the titular boots fit for a (drag) queen.

Charlie faces adversity in the form of his insufferable fiancée Nicola, played by Samantha Bay Strandin, and her self-focused personality. (We're not allowed the chance to know Strandin’s character much, but what information about her is given is not strictly positive.) The contrast between these lovebirds is stark because Charlie is almost overly preoccupied with doing right by the factory and the employees he considers to be family. And Penick has an almost bumbling quality about him that makes Charlie as loveable as he is infuriating. If you consider the overwhelming desire to grab certain on-stage characters by the shoulders and shake some sense into them a sign of believable acting, then Penick is an unquestionable success. 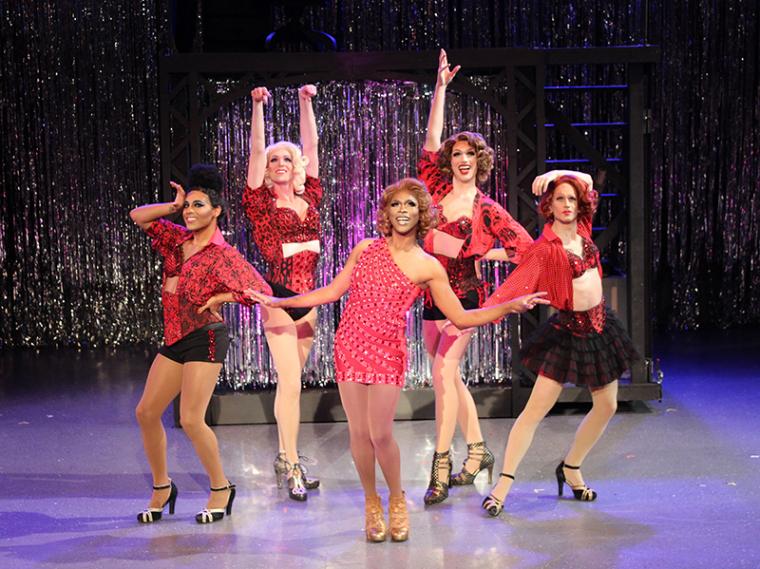 Meeting Lola (Malik Harris), however, was somewhat underwhelming. In the dark streets of London (a scene almost too-dimly lit by Sue Berger for my taste), Charlie attempts to save a damsel in distress. Little does he know that Lola, a drag queen, doesn’t need a rescuer. But back at the office, Charlie puts together the pieces of finding a new niche market – well-made, stiletto-style boots in men’s sizes – and his wholehearted optimism in reinventing the heel in “Step One” is quickly met with doubt from Charlie’s closed-minded factory team. Things don’t improve when Lola and his angel sidekicks (Sean Jaenicke, Kevin Korczynski, Weston Lundy, and Cory Shorter) arrive to see the boots and have to explain the magnetism of stilettos in “Sex is In the Heel.”

Lola and his sidekick angels, whether scantily-clad as referees or glammed to the nines for the runway, were the recipients of Greg Hiatt’s most impressive costumes paired with Dianne Dye’s absolutely fabulous wigs. Circa '21's production also includes a few direct-from-Broadway rental costume pieces ... but discerning a rental from a Hiatt is impossible. While the contrast between the delicious costumes and the factory workers’ dumpy denim looks are profound, what’s less surprising is how every character, named or not, is humanized throughout the show through different character archetypes.

If the idea of drag queens makes you feel uneasy, you may find yourself represented on stage by Mitchell Matyas’ tough-guy Don. As Charlie’s childhood comrade, Don’s entire career has been spent sheltered in the shoe factory, and Matyas captivates as the stage’s representation of “everyman,” with Don’s evident personal growth and faithful loyalty making his character a loveable addition to the story. Matyas genuinely shines; his undeniable stage comfort during his big song with Lola, “What a Woman Wants,” is one of Kinky Boots' most obvious lessons about equality wrapped up in a song-and-dance package and delightfully choreographed by Christie Kerr. 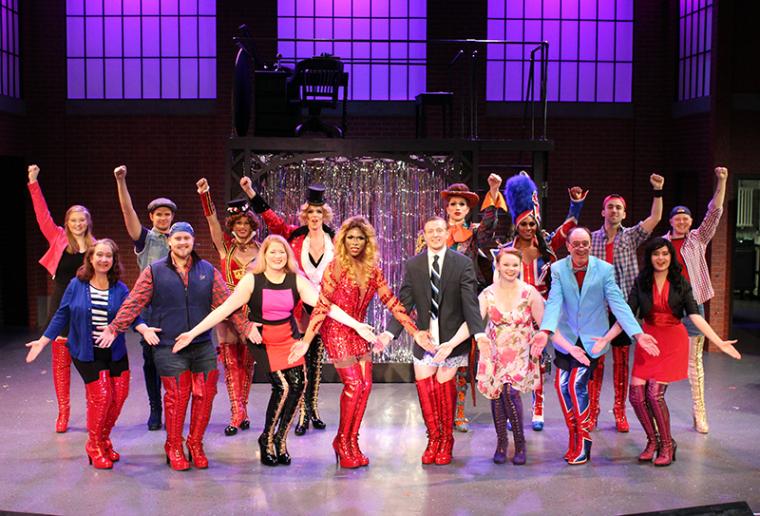 If you’ve ever pined for someone who is unavailable, Brittany Church’s Lauren may hilariously resonate with you. Church comedically commits to her character’s inner monologues, and with the aid of some clever direction from Reines, makes “The History of Wrong Guys” a true first-act highlight, garnering many chuckles from our fairly quiet January 19 audience.

Harris brings the sweet Lola to the stage with a powerful performance and the most important lesson of the production: We are all much more alike than we are different. Truly, you may be surprised by how much Lola’s, or his alter ego Simon’s, stories resonate – it certainly floors Charlie. And Harris is an immensely talented and complex performer, moving just as assuredly in heels as he does in the other footwear options he sports.

During Sunday’s performance, the audience didn’t initially give a whole lot of energy back to Harris, and subsequently, it felt as though he slightly held back some passion at the show’s beginning. During the sensational finale “Raise You Up/Just Be,” though, when the audience energy – clapping, smiling, standing – finally came fully alive, Harris’ presence seemed to suddenly outshine even the flashy red sequins he was sporting, and he brought the house down.

Kinky Boots is a story of self-discovery and acceptance. It’s about saving a legacy and finding yourself in the process. Don’t let concern for the title distract you from stepping out to enjoy what this production offers: a stellar cast telling a hilariously charismatic story set to music that will leave you joyfully dancing your way out of the theatre. It may be cold outside, but right now, it’s red-hot on the Circa '21 stage.

Kinky Boots runs at the Circa '21 Dinner Playhouse (1828 Third Avenue, Rock Island) through March 14, and more information and tickets are available by calling (309)786-7733 extension 2, or visiting Circa21.com.