This Is Them: “Their Town,” at the Mockingbird on Main through October 1 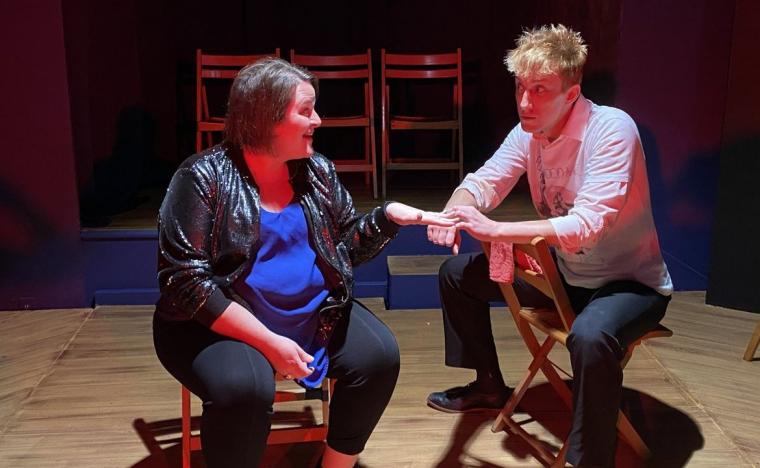 Emmalee Hilburn and Adam Cerny in Their Town

Opening night of writer/director Alexander Richardson’s original play Their Town, now being staged for the second time in the area but with a newly updated revision, was, overall, very successful. I initially left Friday's performance trying to draw all of the parallels between this work and Thornton Wilder’s 1938 Our Town. But Richardson’s modern version is inspired by Our Town, as opposed to being a direct update of Wilder's story. And by using the original text as inspiration, Richardson gave us a fresh take on what the classic play means in a modern world, updating characters, plot structure, relationships, stage design, and more.

Richardson's comedic drama is mostly a collection of long-ish scenes, usually between just a few characters. These sequences themselves were all wonderfully acted and touching, but most of them would've been more effective if considerably condensed – the show dragged on a little too long. That being said, not a single scene or combination of actors or characters proved disappointing.

Their Town opens with two narrators addressing the audience and bringing costume stands to either side of the stage. Just one of the show's many clever, modern updates was to split the narrator role into two (unlike Our Town, which has one character – the Stage Manager – serving as narrator), with Taylor Lynn playing “She” and Adam Cerny playing “He.” Over the course of the play, the two portray many minor characters in the town, changing their costumes on stage and switching personalities quickly to enact different people. The two lean into the iconic meta-theatricality that comes with Our Town, and the duo's work was expertly done. Both Lynn and Cherny had some fun, over-the-top roles, but they also surprised me with more down-to-earth characters. Lynn and Cerny were in the show the entire time and always delivered something new or unexpected, and even in moments when they weren’t talking, I found myself frequently looking toward the narrators to catch their unspoken reactions. 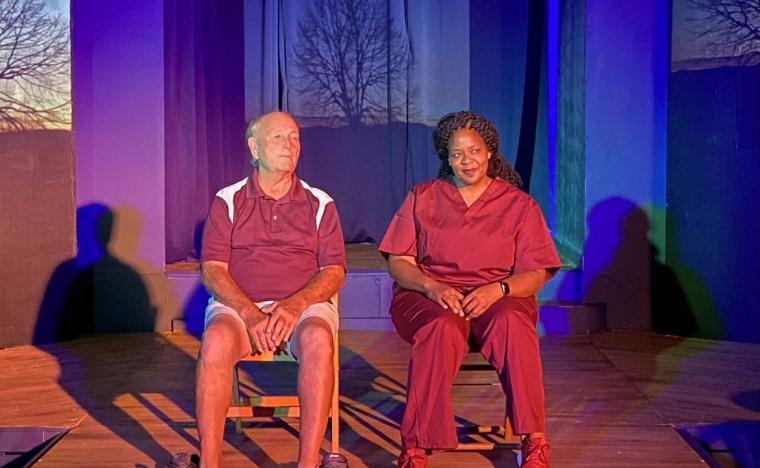 Instead of focusing super-heavily on Emily Webb’s story, as Our Town does, Their Town tells the stories of many “flyover” residents and their relationships with each other, revealing the connections and parallels they have in each other’s lives in a small Midwestern locale. We meet Emily (Brittany Anderson) and George (Drew DeKeyrel) as a relatively happy pair, and watch their relationship and personal lives unravel as the play progresses – with Richardson providing a really great twist at the play’s end. Anderson gave a dynamic performance, showing us a different layer of Emily with each scene, and was nicely counterbalanced by DeKeyrel, whose character’s feelings on their relationship were different from hers. The duo's chemistry made Their Town's ending all the more memorable.

Louie Fischer, who I’ve heard is quite the supportive QCA-theatre legend, made his stage debut in Their Town as Bernard, a deteriorating father. Fischer played him honestly and sincerely, and his dry wit and humor were terrifically enjoyable. He kept this same stubborn, dry tone of character throughout, which made some of his touching moments more impactful. Perhaps my favorite scene of the entire evening came in the second act, when Bernard was at a nursing home, sitting outside among projected trees alongside his nurse Cierra (Alisha Hanes). It was touching, beautifully written, and sprinkled with some expert Richardson wit.

For her part, Hanes was multi-layered throughout, and two of her other scenes gave the performer some solid circumstances and scene partners. The first took place on a public bus, with Lynn – offering a variation on a ridiculous Midwestern accent – portraying a BossMom figure trying to sell Cierra essential oils. Another excellent segment occurred outside a pizza joint, with Cierra running into her ex-husband Lonnie (Cerny), a broken man trying to win the woman back. A pizza-joint worker with another ridiculous Midwestern accent (again played by Lynn) arrived mid-scene and began sobbing with Lonnie – a bit that was so much fun. The two characters were crazy but still very real, and were juxtaposed nicely against Hanes' realistic reactions. 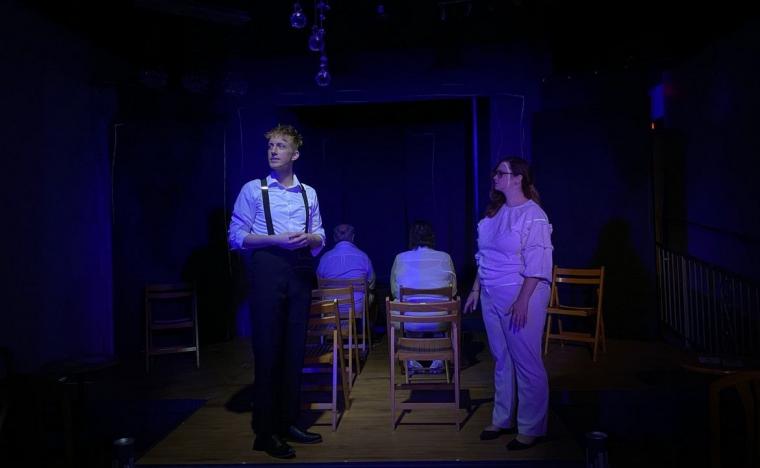 In yet another plotline, we meet radio DJ Michelle (Emmalee Hilburn), who has been working the same job her whole life and wants something more. Hilburn's scene partner was almost always Cerny, who played another radio-station employee, and while their bits seemed to be the ones that dragged on the most, that's not to say they weren't acted well. I felt the tenseness in Michelle’s situation, and her arc from the play’s start to its end was wonderful. In one of the only scenes in which she wasn't in the radio station, Michelle was talking to a telesales operator over the phone, and Hilburn’s physicality, pantomiming, and unspoken acting were spot-on.

One significant element that made Their Town feel modern was the addition of projected video elements. These were largely very effective, and as a projections designer myself, I understand how much work they take. A number of these projections had some visual issues or tried to do too much, but the show was still enhanced by their inclusion, and kudos to the creative team for adding this bold new element to the Mockingbird space.

Overall, Richardson and company did an absolutely superb job with Their Town. Producing original work is no easy task, and this one was done with heart, stellar acting, and a whole lot of care – and it showed. The script is clever, the story is fresh, and the message is relevant. If you have a couple of hours to spare, immerse yourself in this play and support local, original theatre.

Their Town runs at the Mockingbird on Main (320 North Main Street, Davenport IA) through October 1, and more information and tickets are available by visiting TheMockingbirdOnMain.com.