The Towering Piranha Earthquake Inferno Adventure: “Disaster!”, at the Circa '21 Dinner Playhouse through September 10 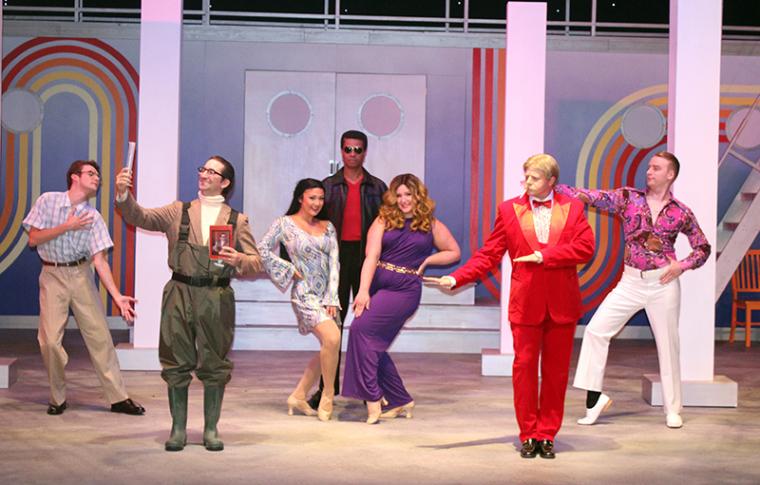 I love disaster movies. Gimme scenes of horrifying devastation wreaked on an unprepared populace; the cheesier, the better. Natural phenomena are wonderful (Earthquake), as are tragedies caused by hubris (The Towering Inferno). Now, the 1950s and '60s had big-scope terror flicks, but they were largely of the radiation-mutated-insects and aliens-conquering-Earth varieties. The '70s, though, were when disaster films really exploded, so to speak.

Disaster!, created by Seth Rudethsky, written by Rudethsky and Jack Plotnick, and now at the Circa '21 Dinner Playhouse, combines classic catastrophic-cinema elements with '70s pop tunes. (I can hear people saying, "Seventies' music was a disaster.” Har har har. You prefer Kajagoogoo? Cool. You do you.) These are beloved songs of my childhood and teen years. I wrote my editor saying I would love to get this assignment – I used the word "luuuv" – and happily, I did. Fortuitously, my companion for the show was someone I'd gone to high school with, who would no doubt get this like I would. We saw Thursday's preview, and director/choreographer Amy McCleary, music director Ron May, and all involved came together to create this silly, music-filled diversion.

The action takes place on a land-based floating casino (sound familiar, Quad Citians?), thus conveniently providing a locale that can be menaced by both earthquakes and tidal waves. Pastel rainbow stripes swoop through Joe Klug's set, creating a mega late-'70s/early-'80 vibe, and there's a steep stairway leading to a taffrail, providing additional playing space. (A taffrail is a ship's railing – like where The Love Boat passengers gathered to wave goodbye at launch.) Specific places are depicted with the aid of actors wheeling various items on and off stage, and special kudos go to Disaster!'s nimble column handlers, because those things are tall. 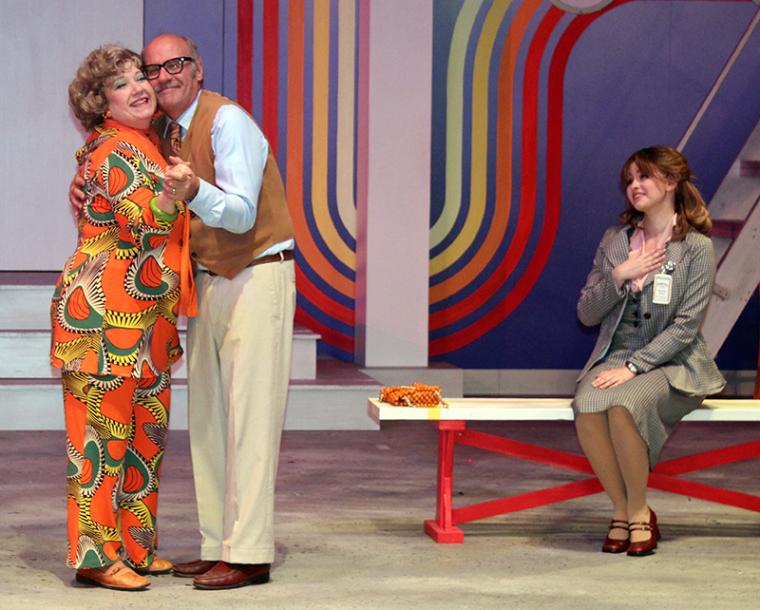 Some of my favorite disaster-film archetypes populate the stage, including Greedy Amoral Entrepreneur (Tony, played convincingly and appropriately annoyingly by Tristan Layne Tapscott), Scientist Whom No One Believes (Ted, played in full-on nebbish mode by Thomas J. Besler), and Estranged Couple Thrown Together Again (Marianne, played by Michaela C. Moore, and Bobby Becher's Chad, who both handle their songs and scenes with admirable aplomb). The iconic, Poseidon-y Loveable Older Couple characters Shirley and Maury Winters (Shirley Winters … get it?) are portrayed by venue veterans Shelley Walljasper and Brad Hauskins, respectively. Jack Carslake portrays Moppets in Peril (yes, that's plural) Ben and Lisa with amazing skill, timing, and vocal finesse. (He'd taken the same roles in Quad City Music Guild's production of this show in the spring.)

Some of the musical's unappealing, worn-out tropes include Sexual Old People Are Hilarious – despite the scriptwriters' penchant for cheap laughs, though, I found Walljasper's and Hauskins' portrayals warm and touching – and Blonde Performers Are Bimbos. (Savannah Bay Strandin, in a wig as amazing as her voice, plays the casino's singer Jackie – who, in fairness, isn't wholly in bimbo territory.) A couple of vocal powerhouses with major comedy chops, Kira Rangel as disco diva Levora and Erica Lee Bigelow as Sister Mary, provide some wonderful moments. (Levora flaunts another of stylist Dianne Dye's spectacular wigs.) And one of my favorite bits came when scientist Ted eluded a jealous Tony by inserting himself into Jackie's "Mockingbird” number. I also applaud the versatile ensemble members – Ashley Mills Becher, Quinn Cason, Natalie Carrera, and Colin Stansky – who danced, sang, acted, and tumbled around during natural and unnatural phenomena just as hard as the principals. 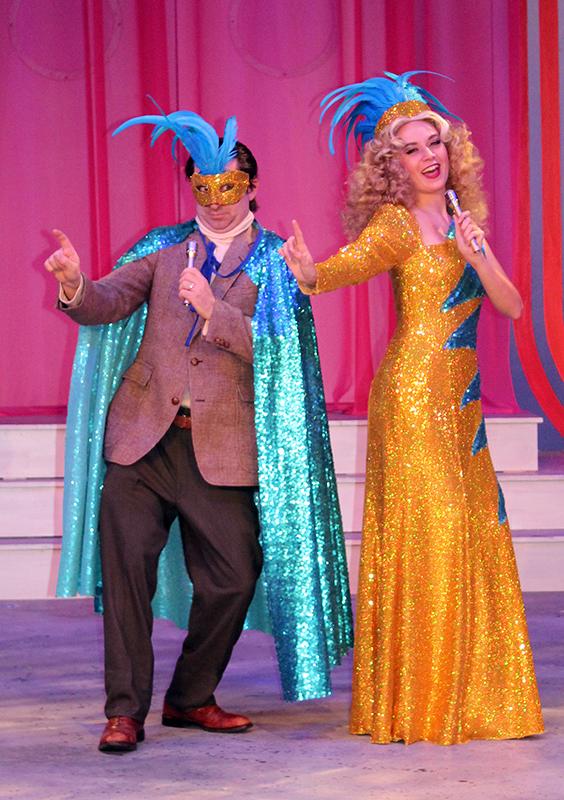 I walked into Disaster! thinking the evening would be bursting mostly with disco beats, but the musical selections cover a range of pop styles. The score includes more than 30 throwback compositions, or parts of them, and the writers even insinuate instrumentals including "Feels So Good" and the Hawaii 5-0 theme into the action. On the other hand, some of the rationales for song choices were painfully contrived; I envision the writers as drunk buddies challenging one another to shove this or that tune into the plot. But I suppose that's part of the fun, although, disappointingly, there was no "Disco Inferno" and no Bee Gees. Worse, I learned afterward that Queen's "You're My Best Friend" is in the script, but was cut here. (Sorry, but you cannot have the '70s without Queen.) I also gotta say there were perfect opportunities to use the theme from Jaws. Maybe the show's creators intended to, but couldn't get the rights.

Unfortunately, in this music-heavy production, there were sound issues during Thursday's preview. A few vocals were shaky at the top of the show, as if warm-ups had been skipped, but they smoothed out nicely later. Also, the sound system itself had faults. Too often, the recorded accompaniment drowned out both singing and speaking voices. The audio range of the music was out of balance, too, with the sound tending toward tinny and reedy. I didn't necessarily expect this stately venue with its rococo embellishments to be rocked by pounding disco-esque bass (and Sensurround was out of the question), but I would have liked the audio to be less shrieky. Still, as many of us did listen to music in the '70s on transistor or car radios, this shrill sound quality wasn't wholly inappropriate.

With Disaster!, time travel is possible – if for a limited time – in Rock Island. You'll enjoy this decade-in-a-blender confection more fully if you already know the music, but there's plenty for others to love, too.

Disaster! runs at the Circa '21 Dinner Playhouse (1828 Third Avenue, Rock Island IL) through September 10, and more information and tickets are available by calling (309)786-7733 extension 2 and visiting Circa21.com.