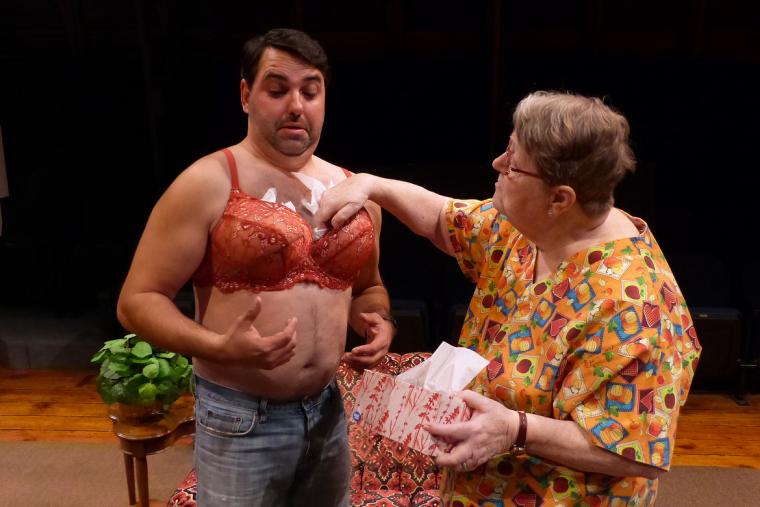 Despite its a cappella rendition of “The Yellow Rose of Texas” and repeated employment of the clever, catchy Unknown Hinson song “I Cleaned Out a Room (in My Trailer for You)” during scene changes, no one could mistake the Richmond Hill Barn Theatre's season-ending presentation for a musical. But in director John VanDeWoestyne's Doublewide, Texas, the character attire designed and gathered by costumer Suzanne DeReu is so eye-catching, and so abundant, that it's almost as though this lightweight Southern comedy were instead a lavish Broadway spectacle boasting a cast of 90 and special appearance by the Rockettes. And the Rockettes wouldn't have been funny.

The wardrobe's greatness is especially winning and unexpected because as opposed to 90, this outing by the indefatigable playwriting team of Jesse Jones, Nicholas Hope, and Jamie Wooten only features nine performers (plus, apparently, that fake baby who was so memorable in American Sniper). But man oh man what this neuftet is wearing! Eugenia Giebel dons loud patterned blouses and an adult-size bunny suit. Nathan Johnson dresses in sleeveless flannel, jean shorts, and cowboy boots before moving on to a stuffed bra, flamenco skirt, and heels. Diane Greenwood sports leopard-skin stretch pants and outfits from The Wizard of Oz, Cleopatra, and The Seven-Year Itch, the latter accessorized with a convenient skirt-lifting fan. And I can't even mention what Mike Skiles has on in Doublewide's final scene. Let's just say that, after seeing the show on November 30, I spent the rest of the night humming the theme from Tootsie.

But even when the comic figures here aren't dressed outlandishly – and this being a Jones/Hope/Wooten slapstick, that isn't often – DeReu's choices are always on-the-mark, firmly establishing personality and the characters' trailer-park milieu. (On opening night, they also gave us something to focus on when our eyes weren't distracted by a trio of playful moths who, like all scene-stealers, never had a problem finding their light.) I just wish that Doublewide itself were as amusing as what its participants were wearing. Richmond Hill's production isn't bad at all, and several elements – especially VanDeWoestyne's elegant in-the-round staging and the casually loopy line readings – are quite excellent. Yet the script, for me at least, proved to be a true case of diminishing returns. I laughed audibly and often during the production's first half hour, and by the time its plot was busily (and nonsensically) resolving itself toward the end of Act II, I was hard-pressed to even smile. 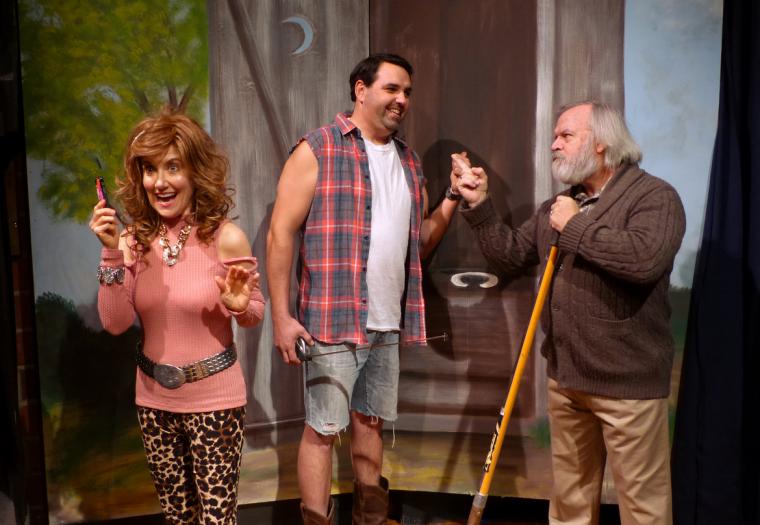 In most stage farces, audiences have to endure a lot of tedious exposition before enjoying the promised hysteria of mistaken identities and pratfalls and so forth. Doublewide, Texas is like the opposite of one of those farces, because while mistaken identities and pratfalls and so forth do indeed commence, this particular Jones/Hope/Wooten is never funnier than it is during its early introductions. Through a series of vignettes at the play's start, we meet the residents of one of Texas' smallest trailer parks: sardonic senior Big Ethel Satterwhite (Giebel); beleaguered diner owner Georgia Dean Rudd (Lisa Ingram) and her accidental boarder Lark Barken (Faith Douglas); cranky curmudgeon Haywood Sloggett (Skiles); and the Crumplers – frustrated worker-bee Joveeta (Jessica Moore), her boozehound mom Caprice (Greenwood), and her dimwitted brother Norwayne (Johnson). Those character names should be enough to tell you that hilarity (or “hilarity”) will likely ensue. And in VanDeWoestyne's presentation, it oftentimes does – at least until the plot kicks into gear.

By intermission, you'll have a solid idea of where Doublewide is heading, with the neighboring town of Tugaloo threatening to annex the trailer park and our goofball heroes threatening to secede from Texas. The joy of the production's introductory scenes, though, is that you have no idea where any of them could possibly be heading, and considering the cheekiness of the Southern stereotypes, the dialogue, Richmond Hill's cast, and, of course, those terrific DeReu costumes, you don't much care.

It's a little unfair and misleading of Jones/Hope/Wooten that their best-written segment here is also their first. But Doublewide starts with a bang in Big Ethel's riotous speech to a group of prison inmates (played by the audience) about the benefits of health food, and Giebel is an instant hoot with her moxie, irritated demeanor, and curveball mantra “More cabbage, less cookie.” (During Thursday's show, Giebel was occasionally caught searching for lines, but it rarely marred her deadpan-comic presence.) And happily, the good times continue to roll with our first exposures to Giebel's castmates.

Ingram, with her throaty alto readings, initiates a lovely familial rapport between Georgia Dean and Douglas' innocent Lark; their relationship is almost litigiously reminiscent of Truvy's and Annelle's in Steel Magnolias – Lark, too, is a flighty pregnant gal – but their conversation is filled with enjoyable zingers such as Georgia Dean's recipe for diner success: “The higher the cholesterol, the closer to God.” A shared phone call quickly establishes Moore as enjoyably, comically rigid and the eternally, adorably pop-eyed Greenwood as another of the performer's signature oblivious loons, even if Caprice is ultimately treated with more dignity by her portrayer than by the script. (Remember how, in Laverne & Shirley, one of the leads would say something akin to “I've never seen anything more disgusting in my life!”, and Lenny and Squiggy would immediately pop through the door with a nerdy “Hel-lo-o-o!”? That's how Caprice makes most of her entrances.) 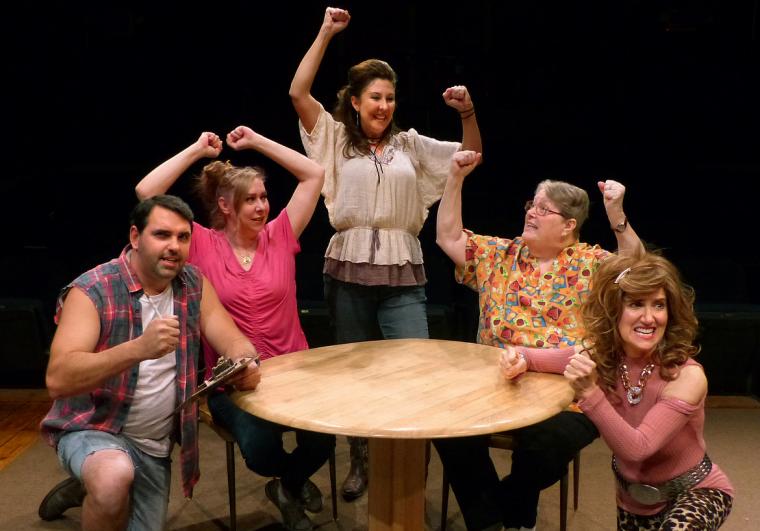 Giving Doublewide's most engaging and consistent performance, Johnson, from the start, is endearingly dull-witted, like a Joey Tribbiani transplanted to the rural South; even in Norwayne's time-killing “woman-less beauty pageant” subplot, Johnson's sweetness and go-for-broke enthusiasm during high-heeled pratfalls salvage doofus-hick routines that would overpower plenty of others. (Johnson does, however, also get to deliver the script's funniest accidental insult, when Norwayne complains about how much work goes into looking beautiful and tells the women on-stage, “No wonder all y'all gave up on it.”) And speaking almost twice as fact as his co-stars – which, in a show with this much languid drawling, is a definite plus – Skiles spits out Haywood's “Get off my lawn!” invective with gusto, and frequently unleashes a high-pitched giggle that suggests the theatrical resurrection of Gabby Hayes.

Given how enjoyable this collective is, it's less a shame than an insult that Jones/Hope/Wooten don't give them better material to run with, especially considering that – beyond the dress-up appearances and rather lethargically presented kitchen-table chase featuring Georgia Dean and Justin Raver's city manager Lomax – Act II doesn't find them doing things so much as telling us about things they've done off-stage. Doublewide, Texas really is the strangest thing, because outside of Greek tragedy and maybe the last 10 minutes of Psycho, I can't think of another entertainment that concluded with quite this much (non-satiric) exposition. The end of the show's first act leaves all sorts of balls in the air; its second concludes with an über-convenient deus ex machina (Sondra Karben's Starla) both complicating and quickly resolving the proceedings, plus a truly jaw-dropping act of “Where'd that come from?!” involving Norwayne that's basically the equivalent of the playwrights admitting, “We give up.”

Still, kudos to the cast for their infectious high spirits and evident attempts to turn Jones/Hope/Wooten caricatures into actual people, and to lighting/sound designer Jennifer Kingry for the nicely timed fades and the Unknown Hinson. (That damned song has been in my head for days.) VanDeWoestyne deserves plaudits not only for his sensational choreography and stage pictures – no matter where you sit, you'll never be staring at the back of anyone's head for long – but for his true “Whoa!” of a darkened scene shift, when four disparate locations switch, with perfect synchronicity, into one centralized locale. And really, enough can't be said about how wonderful this Doublewide, Texas is to look at, given the frisky fun of Suzanne DeReu's costumes and the obvious delight that VanDeWoestyne's ensemble takes in wearing them. Had Richmond Hill's 2017-closer popped up just a few weeks sooner, I totally would've gone as Mike Skiles for Halloween.

Doublewide, Texas runs at the Richmond Hill Barn Theatre (600 Robinson Drive, Geneseo) through December 10, and more information and tickets are available by calling (309)944-2244 or visiting RHPlayers.com.