The Trouble with Harry/Harold: The Mississippi Bend Players’ “Beginner’s Luck,” at Augustana College through August 12 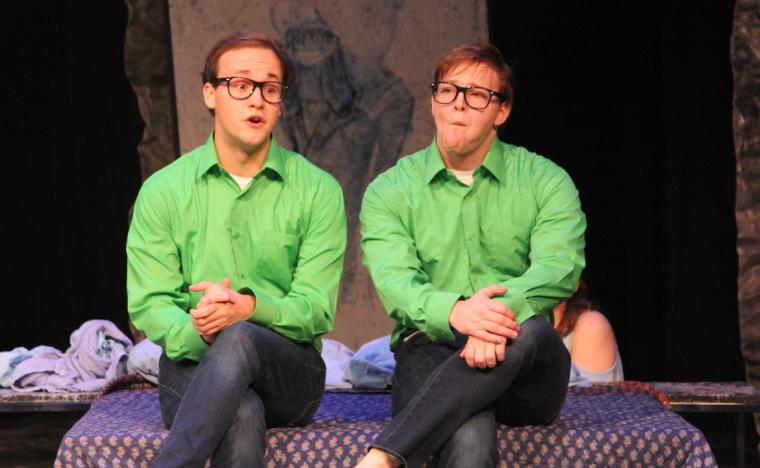 When you see a show and your biggest “complaint” was that the wine was too purple, you know you’ve seen something special. The Mississippi Bend Players have brought their A-game to the stage with the world premiere of Beginner’s Luck, a comedy that's not afraid to ask the big question “What do you want from life?” and manages to be completely satisfying without actually delivering a resolution.

In this original script by P.J. Lasker, we meet Harold (Keenan Odenkirk), a former child actor who longs to make a comeback into the spotlight. The nail in the coffin of Harold’s life – a life that has effectively gone to pieces – is being dropped by his agent, and as he struggles to get back on track, Harold grapples with the consequences of his life choices while talking things over with another version of himself, Harry (Tristan Odenkirk).

If this sounds a little confusing, it is: The Odenkirk brothers, in an interesting and inspired casting decision, play different facets of the same person. Both men, though, are extremely talented actors, and the two were able to effectively blur together, never quite making it clear which version, Harry or Harold, was “reality.” The Odenkirk duo beautifully shift in terms of being recognized by other people on-stage, and the “Which one is real?” question is never really answered. But I don’t want to marginalize the brothers as a unit; Keenan was the focused and often rational interpretation of the child star, and Tristan played the more reactionary side of the character.

Scenic designer Susan Holgersson created flexible cubes and boxes that were suggestive of any manner of furniture pieces, but she also drew the production’s cast in caricature on six-foot playing cards that served as a backdrop of sorts. Holgersson’s design consequently rooted the audience’s vague understanding of what was going on – we were forced to fill in the blanks in our minds and not take the production at face value, which went right along with our sorting through the different versions of Harold/Harry. 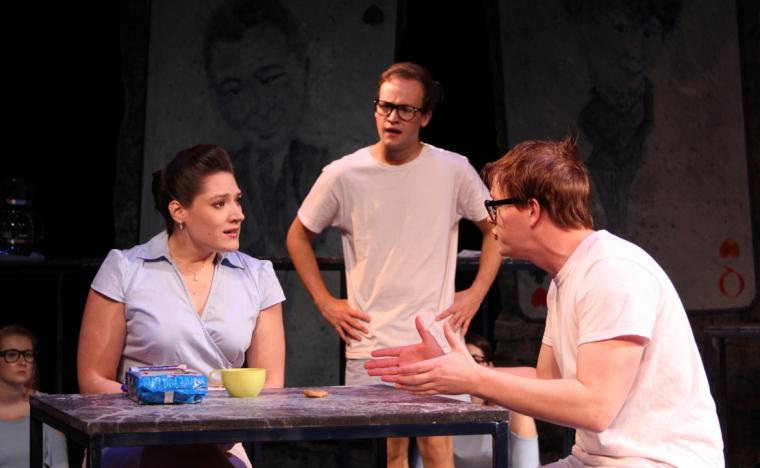 The Beginner’s Luck Chorus composed of Madeline Fer, Melina Herman, Noel Huntley, Ellie Larson, Kira Rangel, and Jaryd Whitmore is every bit a collective character in the show – figures not only in charge of shifting Holgersson’s splatter-painted set, but who remain on-stage for the bulk of the show. The Chorus punctuates moments with their often silent participation, enhancing our understanding of what's going on. Were they part of the set? Were they characters? They were actually both.

Right from the start, Beginner’s Luck is full of quips and one-liners. Lasker, who has written for The Golden Girls and Barney Miller, is no stranger to situational comedy, and while director Philip Wm. McKinley created a world of intentional disorientation, the language is straightforward and sitcom-y. No one came on-stage without offering a line of wisdom or hilarity – typically both. Where Harold/Harry was confronted with his own problems, he encounters others in his life journey who help him figure them out.

Reader employee Mike Schulz is featured as a wide variety of characters, each with his own unique mannerisms and accent. When Schulz was on-stage, his characters managed to effectively steal the focus then cleverly hand it back to the Harold/Harry duet for them to glean a little something. And Harold/Harry has a lot to learn; in fact, he has managed to let down or screw up all the meaningful relationships in his life. Others who aid in changing the trajectory of Harold/Harry’s life include his one-night-stand Amy (Megan Clarke) and an elderly gentleman (Mark Ruebling). 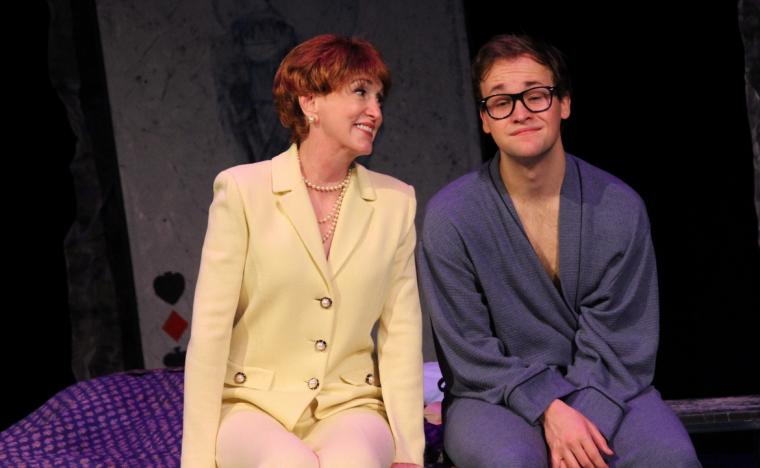 The lovely Marjorie Gast, meanwhile, brought a pointed maturity to the role of Harold’s ex-wife Lisa. Gast perfectly captured the love, hopefulness, and anger expected from someone who is disappointed with the man she loves. Lisa challenges Harold to be a better father, lover, and person, but ultimately is not the woman who serves as the play's major catalyst. That honor is bestowed upon Harold/Harry’s mother Miriam (Lora Adams), the truth-teller extraordinaire. Beginner’s Luck excels in blending the comedy with the tragedy that is human existence, and Miriam manages to make many strong points, with Adams finding a beautiful balance between overbearing and nurturing. Through the lens of Miriam, Harold/Harry gets the unvarnished perspective he most needs.

Harold/Harry speaks frequently about his beginner’s luck, and as it happens, he's been good at almost everything he tries – until suddenly he isn’t. Happily, however, this production is not so ill-fated, and remained strong from start to finish during Saturday's performance. There was hardly a moment in which I doubted a creative decision, more often finding myself deeply appreciative of the cleverness in small details, with lighting designer Chris Howard keeping specific playing cards lit at the end of scenes a brilliant example of strong choices.

Serving as something of a cautionary tale about what not to do with your life while still managing to be laugh-out-loud funny, this satisfying production left me wanting more – including, for reasons the show will make clear, a chocolate-chip cookie. This may be the first-ever run of Beginner’s Luck, but I wager to guess it won’t be the last.