Two Legs Good, Four Legs Better: “The Goat, or Who Is Sylvia?”, at the QC Theatre Workshop through November 3 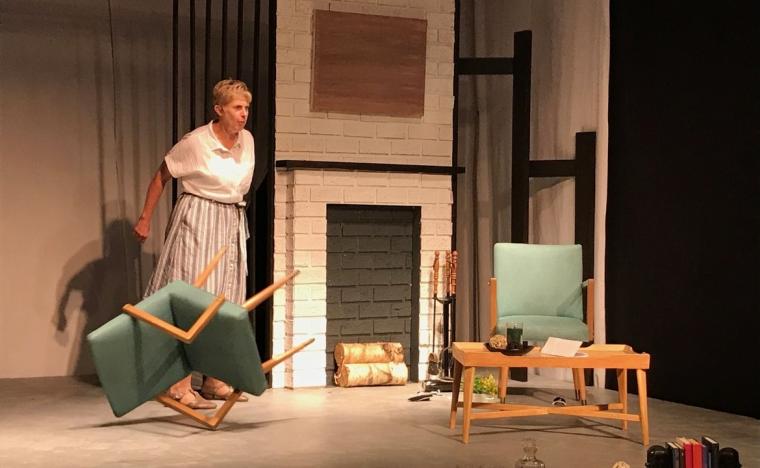 Cory Johnson in The Goat, or Who Is Sylvia?

From the moment I entered the QC Theatre Workshop for Friday's opening-night performance of The Goat, or Who Is Sylvia?, my head was in a different place than ever before – literally, as the stage and the seating had swapped places since my last visit. From the moment the final spotlight died, my head has been in a different place figuratively. Edward Albee's show, which debuted on Broadway in 2002 and won that year's Tony for Best Play, stirred thoughts and ideas that I'm still pondering.

Albee's most famous work, Who's Afraid of Virginia Woolf? (which premiered 40 years before The Goat), is about years of domestic anguish and problematic coping strategies, and the deliberate cruelty they fostered. In The Goat, the anguish is fresh and raw, and the pain, ostensibly, is born from love. This production contains mature content (to state it blandly), but while it's decidedly dark overall, there's plenty of intentional humor, provoking some of the audience's laughter. Other laughs came from shock, and I also heard gasps, murmurs, and even shouts of alarm.

Director Cait Bodenbender, whose theatrical oeuvre is chiefly Shakespearen and Greek, here has orchestrated an extraordinary, affecting modern-drama experience. I know these outstanding actors – Cory Johnson, Reader employee Mike Schulz, Tracy Skaggs, and Tristan Odenkirk. I expected them to be marvelous, and they are, breathing genuine life into an already-astonishing script. And Aaron Randolph III, also the theatre's artistic director, designed and decorated a lovely mid-century living room fit for a stylist's portfolio. Comfy, spare, strewn with books and art, it looks like a place where happy people dwell – and have been happy, until recently. 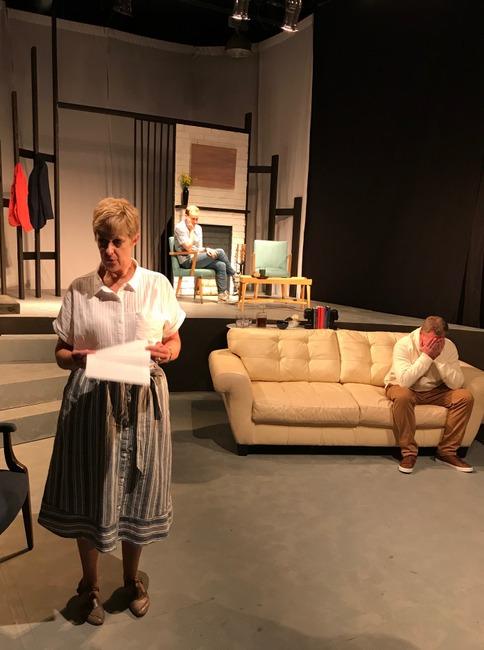 Martin (Schulz) and wife Stevie (Johnson) enjoy their long, stable marriage. It's an enviable one, full of playful affection and jovial, intellectual banter. However, the stress of Martin's flourishing career is evident. Is his mind going? Does work pressure demand an outlet? Is he sharing his joy or asking for help when he confesses his affair with Sylvia to his best friend Ross (Skaggs)? Whatever Martin's reason, Ross, concerned, immediately tells Stevie. She is shattered, and her cataclysmic torment distressed me greatly. I'm too familiar with the agony in her voice.

Infidelity is as old as fidelity. Even so, people's explanations as to why they betrayed those they supposedly cherish often seem specious – wanting fresh romance, being overcome by beauty, or struck by deep love as never before. It is this last that afflicts Martin. He describes meeting Sylvia as a transcendent experience that he didn't expect or even imagine possible – and Schulz made me believe this.

Even though the play is allegorical, I can interpret Martin's affair as real, not just as a symbolic vehicle. Intense relationships can flourish whether the object of desire is aware of the adoration or not. People become deeply involved with those they've never met. (Pygmalion fell in love with a statue.) In indulging himself, Martin plunges the others into misery. Does this one transgression now define him and undo everything else he is? No one, after all, is all good or all bad. Are our attributes inborn? Do we choose all our actions? Do past experiences shape us irrevocably? Can extreme pressure make any reaction forgivable? If we go beyond society's norms, are we mentally ill? 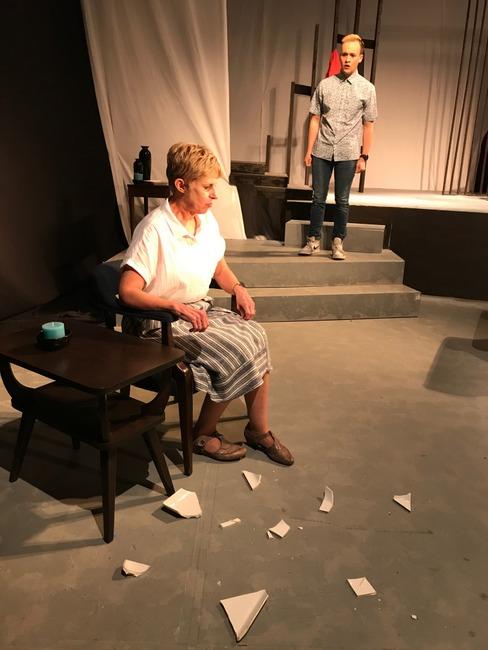 We meet Billy (Odenkirk), Martin and Stevie's teenage son, only after the revelation of his father's affair, and I disagree with the playwright's choice here. Billy's anger would have been more meaningful had he appeared before he found out. I'd rather we'd seen his contentment, not just heard about it, and Billy would only have needed to pop into the first scene with a cheery line or two. But then again, I've never won a Tony. And Odenkirk's portrayal is authentic and heartbreaking, and he plays the bitter humor in it ably.

Remembering Martin's and Ross' derisive dismissal of Billy's sexual identity in The Goat's first scene made me indignant after it was clear what Martin had been doing. And later, Martin casually mentions the repeated sexual abuse of a preteen girl, whose situation, although more horrifying than Martin's offense, is also less taboo. Why? Skaggs, as Ross, is steady, low-key, and caring, and although I could argue that Ross sets the family's ordeal in motion, he's ultimately a better friend than Martin – a man who can't even remember the name of Ross' son. However, I felt for Martin, and have experienced that stunning moment that he describes as an "epiphany." He cries, repeatedly, "You don't understand!" – and like many people, I know that helpless frustration. Still, in Albee's play, there's little room for anyone in Martin's head but Martin.

A friend of mine avers that regardless of how well you think you know someone, there will always be 20 percent you can never understand, no matter how you try. I was emotionally exhausted after going through Martin's 20 percent with his loved ones. (It's hard to fathom how these actors can still stand after their performances.) Examining mores we normally don't question is healthy. So make reservations now for this exceptional production of The Goat, or Who Is Sylvia? -- seats are going so fast, the Workshop had to add two shows.

The Goat, or Who Is Sylvia? runs at the QC Theatre Workshop (1730 Wilkes Avenue, Davenport) through November 3, and more information and tickets are available by calling (563)823-8893 or visiting QCTheatreWorkshop.org.