It Takes Two to Tango: “Six Dance Lessons in Six Weeks,” at the Playcrafters Barn Theatre through October 10 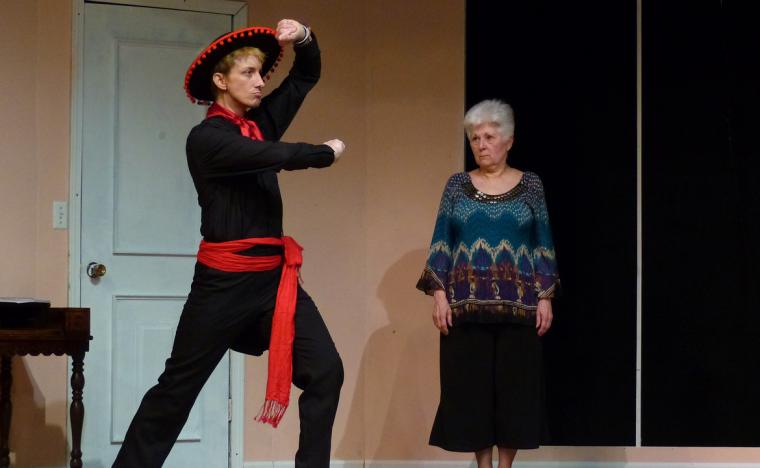 One of many shows postponed due to the emerging pandemic, Six Dance Lessons in Six Weeks finally made it to the Playcrafters Barn Theatre stage – some 66 weeks later. Author Richard Alfieri's two-character play premiered in Los Angeles in 2001, eventually making it to Broadway; the script was also adapted for a 2014 movie. And having seen Saturday's production, I'd argue that director Jennifer Kingry could not have chosen a more dynamic duo to perform this work than Stephanie Naab and Adam Cerny.

The formidable Naab has been a Playcrafters member for several decades, having taken on every imaginable job both on and off stage, including in administration. She was also the venue's executive director for five years. The frighteningly talented Cerny holds a BFA in Theatre Arts with an acting emphasis, and on Quad Cities stages alone, he's played leading and featured roles in – well, I'd happily tell you how many shows, but I can't count that high.

Designed by Kingry, Six Dance Lessons' lovely living room set, which the audience had the pleasure of admiring before the show, is spare, yet still reeks of wealth. The center windows show off a view of the Gulf of Mexico that only money can buy (in St. Petersburg, Florida, anyway, where the high-rise condos usurp the view for everybody else). Kingry also designed and ran the lighting and sound, and, I suspect, chose and recorded every song, as well as spent many hours working on other uncredited aspects of the show – and she is good at everything.

Naab plays the condo's owner Lily, a mature woman and native South Carolinian who has booked a dance instructor who makes house calls. Cerny is that dancing man, Michael, and when Lily first opens the door to greet him, their height difference made me wonder how the heck they were going to be able to dance together. (Answer: "With ease and grace.") 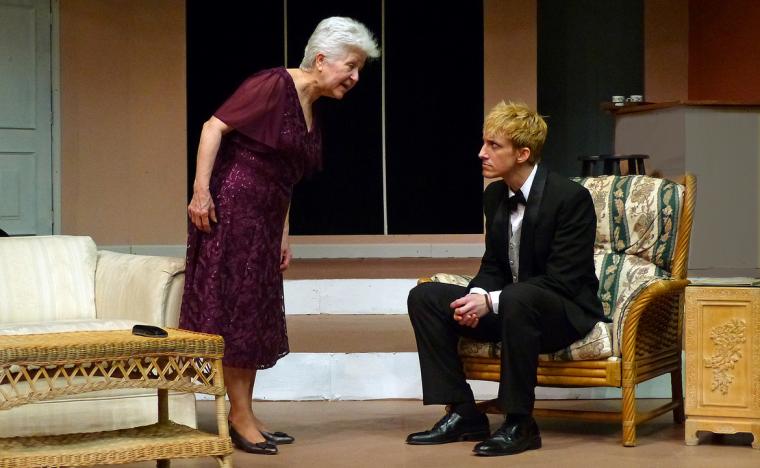 Naab and Kingry each already had plenty to do for the show. However, as the production's costumers, somehow they also came up with 14 wonderful outfits – and most of Cerny's actually are "costumes" in the traditional sense of the word, as he dresses to mirror the specific dances' origins.

When Michael rings the bell, and Lily peers tentatively through her peephole asking who it is, his answer reveals that he's a major smart aleck. And he doesn't let up. His continual facetious remarks rub conservative Lily the wrong way. Michael has no filter, and Cerny makes him hilarious.

Naab's initially cautious, halting interpretation of Lily really makes me feel like the character hasn't spoken to another person in months – although, paradoxically, she yearns to. Michael's comments get more outrageous as he baits Lily, which he does because it's just so damn fun. Watching her contain her anger (as that is what proper Southern ladies do) is delicious because you know she's going to blow up eventually. Lily is fascinating, too, because although she seems fragile in many ways, she's admirably strong, though not a steel magnolia. We learn that this Lily is actually titanium – stronger than steel.

Despite her protestations, admonitions, and pleas for politeness, Michael continues to be brash and obnoxious. All the more infuriatingly, he doesn't flinch when Lily lands her verbal blows – until he does. Then we find out that Michael's flippant, mocking ways hide a genuinely caring, humane man – but that, itself, is also a facade designed to cover the bitter truth: He knows the bleak realities of life. 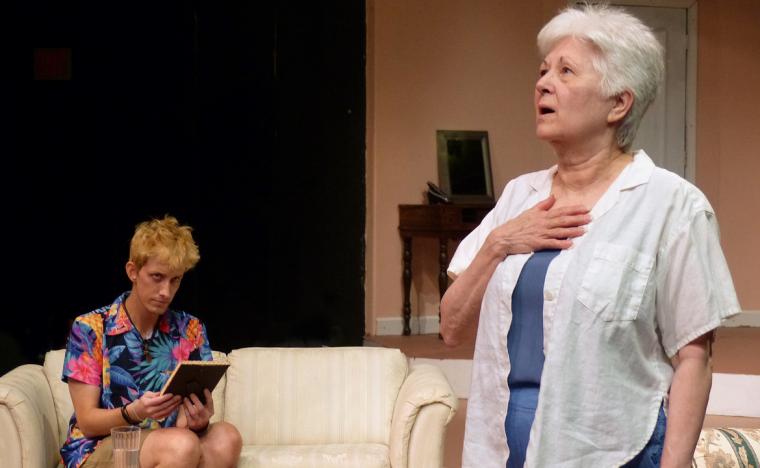 Now, about that dancing. Kingry's actors started dancing together weeks before they started rehearsing the play, and the practice clearly paid off. As the title advertises, there are six styles for the actors (and Lily) to master, and it's a joy to watch this pair dance, rhythmically and smooth as silk. Just like the great ones in any endeavor, they make dance look fun and easy. Their tango is vivacious and funny, and Cerny's slick, angular moves during a Sinatra tune, plus his business with the hat, amazed me. Normally, plays are not dance-y. But I would have enjoyed seeing more of it, because the dances are splendid – as is their choreographer, Stephanie's husband Tom Naab (whose Playcrafters credits are as long as hers).

Cerny and Naab play their characters very well, with superb pacing, timing, expressions, and interpretations. I just wish they had a better script. Alfieri's premise and the lines themselves are fine, but the structure of his scenes is as formulaic as a Harlequin romance. (While watching, I was anticipating some shocking interruption of the monotony that never came.) There are, however, a few surprises throughout – and even though it's part of the formula, we do get the fun of anticipating Michael's next ostentatious dance outfit and Lily's reaction to it.

Skilled actors can elevate their material, and in Six Dance Lessons in Six Weeks, Naab and Cerny certainly do. The opposition in their verbal sparring, the harmony in their synchronized movements, the humor, the anger, the touching moments – they all make for a most enjoyable evening of theatre.

Six Dance Lessons in Six Weeks runs at the Playcrafters Barn Theatre (4950 35th Avenue, Moline IL) through October 10, and more information and tickets are available by calling (309)762-0330 and visiting Playcrafters.com.