And the Walls Came Tumbling Down: “The Play That Goes Wrong,” at the Circa ‘21 Dinner Playhouse through March 12 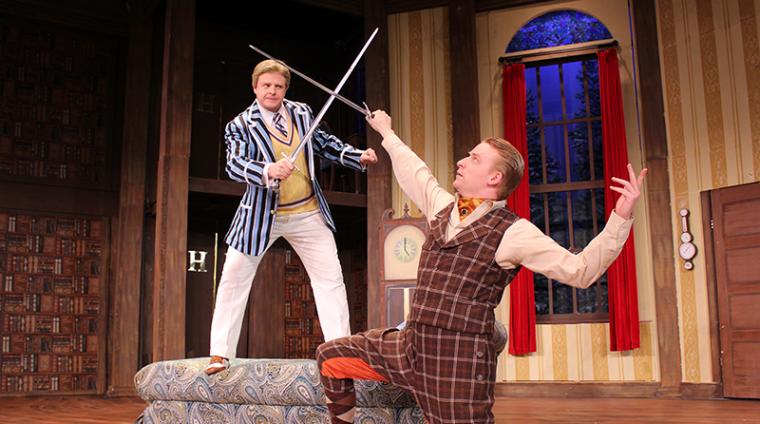 The Play That Goes Wrong is an apropos title given that director Warner Crocker’s cast, in the Circa '21 Dinner Playhouse's new production, is enacting the Cornely Polytechnic Drama Society troupe's production of The Murder at Haversham Manor. It's a play within a play. As such, there’s even a program within a program. I’m not sure who got the pleasure of writing the “Drama Society” bios, but reading them had me chuckling before the show even began. And while everything, in fact, does go wrong with The Murder at Haversham Manor, Crocker and his performers definitely got everything right.

Friday’s opening night started with Bootlegger Brad Hauskins making an announcement during the dinner hour that proved to be the first indication of the evening's (intentional) disasters. Certainly, looking at the stage decked out as a glorious English manor, there was no outward indication that anything might go wrong: Scenic designer Susan Holgersson’s stately set is, hands down, one of the coolest I’ve ever seen. Scenic engineer/construction supervisor Kris Eitrheim, technical director Nick Divarco, and scenic artist Trinity Filut, meanwhile, did amazing work on this set that was truly the show's uncredited 12th cast member.

After the Bootleggers' musical pre-show, there was a flurry of onstage activity and final stage preparations, and I especially appreciated the duct tape and staple gun getting in on the action – by my estimation, the truthiest on-stage moment ever. By the time Benjamin Elias Nickols, as Murder at Haversham Manor director Chris, appeared on stage for the second round of comical pre-show announcements (after which there really would've been no excuse for a wayward phone to ring), energy buzzed the room as we, in the audience, collectively waited for things to get messy. It didn’t take long. 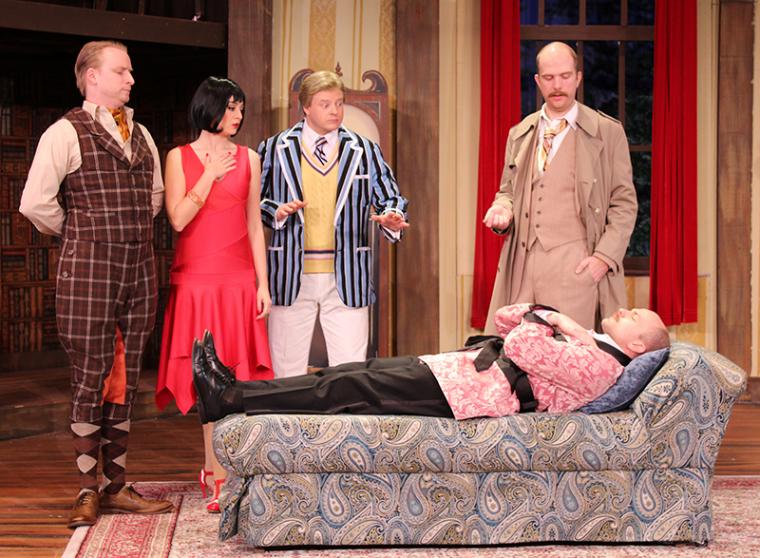 The scene opens on Jonathan (Martin Flowers) lying not so still on a fainting couch because his character has been murdered. Dennis (Derrick Bertram) and Robert (Bobby Becher) consequently have a rather difficult time trying to get on stage – the first of many mishaps – and when they finally do, they discover the murder and sound the alarm. Our full cast of characters then assembles, including Nickols, Savannah Bay Strandin’s Sandra in full-throttle melodramatic devastation, and Tristan Layne Tapscott’s Max puttering around. What to do with the body of an actor who's dead … but not really? Well, it’s complicated. And comical.

Murder, however, isn’t the only thing that goes wrong here. Bertram’s character has plenty of amusing difficulties pronouncing unfamiliar words. And stage manager Trevor (Thomas J. Besler), hanging out in his booth, has failed to ensure that the stage was properly set before the show began, and no one can now find the props they need. Backstage guru Annie (Elsa Scott Besler) and the other techies – Samantha Flipp, Khalil Hacker, and Emmett Boedeker – try to help out where they can, but most often end up triggering further catastrophes.

This ensemble is phenomenal, and so are their stunts. DC Walker, the stunt director, did a splendid job helping the cast look as though they’re in great pain without actually causing harm, but oh, the shades of red these actors turn is truly impressive. As the show must always and every time “go on,” this group powers through even when things literally and figuratively collapse around them. Oddly, the only things that didn’t suffer many misfortunes were the clothes. Designer Gregory Hiatt’s costumes impeccably established each performer while clearly still allowing ample stretch for the required movements. Tapscott and Beecher, especially, twisted and contorted their bodies into positions experienced yogis would be proud of and were uproariously funny. To be honest, I’m fully impressed Beecher’s tweed pants held up. Admittedly, though, if trousers had happened to split onstage, no one would likely know the difference considering just how many things were going hilariously wrong. 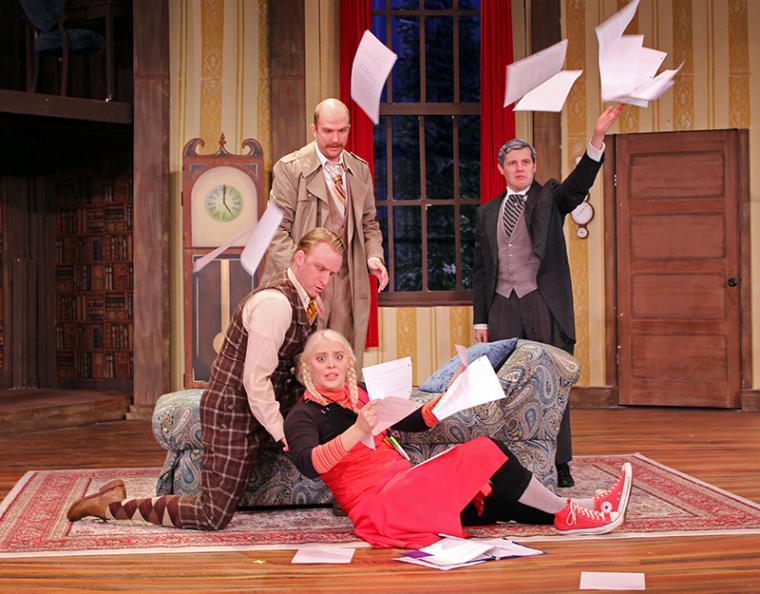 I don’t want to give too much away because much of the humor in this murder mystery by Henry Lewis, Jonathan Sayer, and Henry Shields comes from the unexpected. Nevertheless, you know that “How it started, how it’s going” social media trend in which people post dramatic changes in themselves? Well, from pre-show to finale, the changes on the Circa '21 stage are, in fact, dramatic in the same way. One character is even portrayed by three different actors (and an inanimate object), with each iteration finding comedic success in its own witty way.

Overt slapstick and physical comedy doesn’t always have me in stitches, but in fairness to the show, I went in with an open mind and a secret weapon: my nine-year-old. Third-grade boys (as you may know) love slapstick humor and running gags – where is that Duran Duran album, anyway? – and his joy was utterly contagious. We enjoyed the production so much that we're talking about bringing the whole family to see it again. I assure you, if you’re looking for a way to make the winter doldrums more bearable, getting tickets to The Play That Goes Wrong is the right answer.

The Play That Goes Wrong runs at the Circa '21 Dinner Playhouse (1828 Third Avenue, Rock Island IL) through March 12, and more information and tickets are available by calling (309)786-7733 extension 2 or visiting Circa21.com.