Swarm Fuzzies: “Beehive: The '60s Musical,” at the Circa '21 Dinner Playhouse through July 10 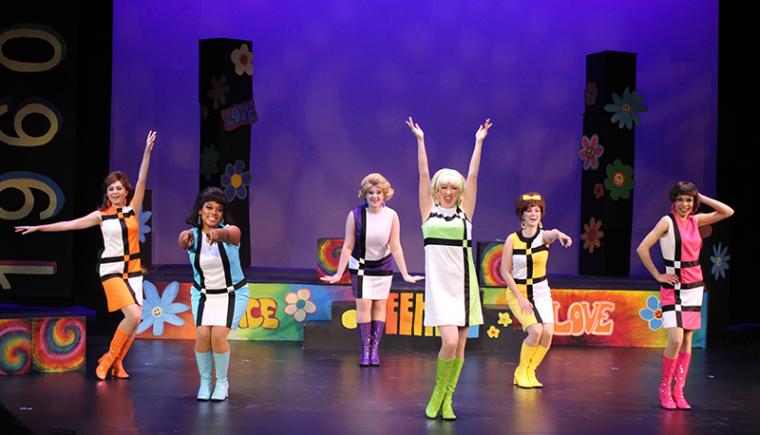 If life is making you lonely, you can always go downtown to the Circa '21 Dinner Playhouse and experience their latest offering Beehive: The '60s Musical. Director/choreographer Shelley Cooper and her gang of six ladies will take you on a musical journey through the decade that is chock-full of your classic favorites. This fun night of familiar tunes is exactly the answer – it’s a gas!

While there isn't a super-discernible plot in Beehive, it doesn’t matter much, because the fun is in remembering the songs (and maybe even singing along). The bubbly Brooke Myers and her character Wanda provided most of the introspective monologues and storytelling that wove between each song, creating a retrospective narrative. Occasionally, during Saturday’s presentation, Myers would attempt to engage the audience by asking them questions about the groovy '60s – a routine that, unfortunately, fell a little flat. Whether that was a byproduct of my fellow patrons' responses (or lack thereof) is undetermined, but as it was made abundantly clear that Myers and the other ladies on stage just wanted you to have a good time and engage with the show, we can chalk it up to group shyness.

Here’s the thing: I personally had little to add to the conversations, given that the '60s were before my time. Lest you think the evening wasn’t enjoyable, though, or couldn’t be without background knowledge of living in the decade, I’m here to tell you that's not the case. There were only one or two songs I didn’t immediately recognize and know all the words to. And I certainly wasn’t the only person who found themselves clapping along – there were kids up front who were having the time of their life, and others around the theatre were ponying and doing the monkey right along with the onstage dancers. 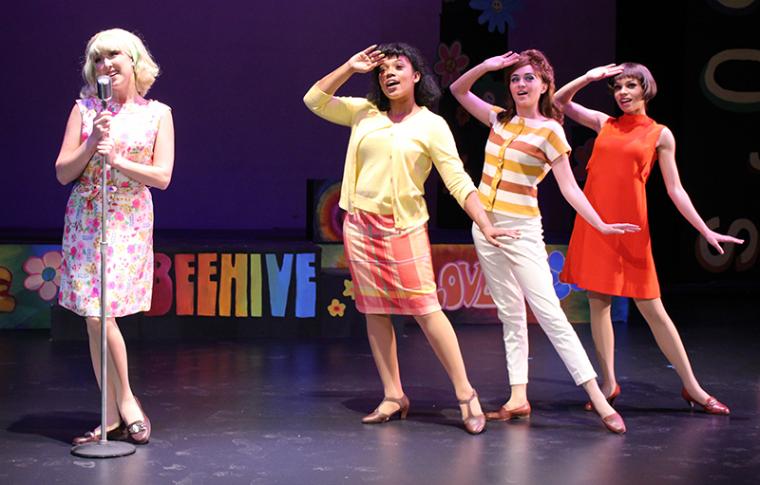 The female musicians of the '60s, the girl groups, and the divas were something special, and this cast was musically up to the task thanks to music director Ron May. Especially impressive was Kira Rangel’s Gina, with her powerhouse vocals. Rangel didn’t get a chance to really let loose until the second act but was certainly a star once given the opportunity. The same can be said for Noel Jean Huntley’s Laura, whose Janis Joplin set in the second act made the audience around me dance and cheer with glee.

Another great addition to the cast was Jasmine, played by Ravyn Davis in her Circa '21 debut, who left me wanting more after her early-in-the-show salute to the Supremes. Allison (Erica Lee Bigelow) and Pattie (Savannah Bay Strandin) rounded out this foxy sixsome, gracing the stage with their mellow personalities. And a fun tidbit: Even though Beehive features an all-female cast, if you look closely, you’ll spot a cameo by one well-known male Circa '21 actor.

Not sure who is whom of the ladies? Don’t worry: The women all introduce themselves during “The Name Game” toward the top of the show. But it hardly matters. These gals rock as a cohesive group, and most of the time, the background singers are just as interesting as the woman singing the lead. The only bummer part of Cooper’s production was that it felt as though some of the gals, here and there, weren’t having a ton of fun with the choreography and music, which is kind of hard to imagine considering the whole show is one big bop and certainly not lacking in personality. Maybe they haven’t yet embraced the charm of '60s girl-group music; maybe they were nervous they’d break a heel; maybe they were just tired during a long opening weekend. But hopefully, their occasional lack of energy works itself out so that everyone is at the top of their game going forward. 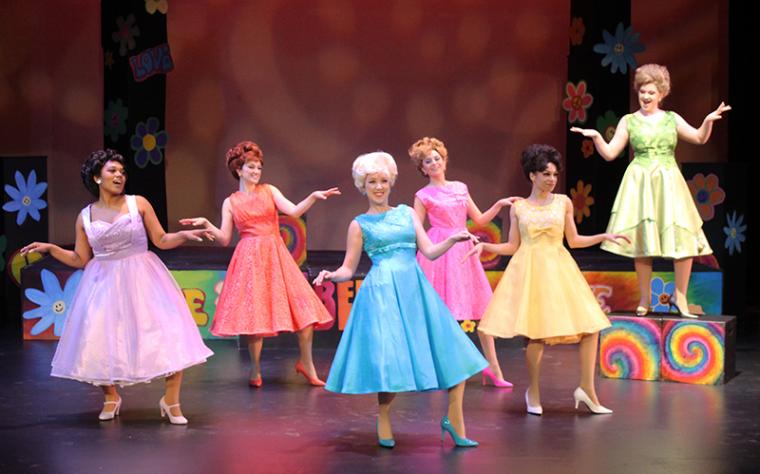 If you’re thinking you can skip seeing Beehive and just ask Alexa for a '60s playlist, you’ll be missing out completely, as the visual spectacle is what makes this show special. Sure, Susie Holgersson’s set was fairly simple, with flower-power and peace signs adorning boxes and a platform stage. But truly, anything more would have been overkill. Designer Heather Hauskins got the lighting just right, providing enough color and groove to make the show feel reminiscent of a school dance or fun concert, and choosing the perfect lights to also make the costumes shine.

And oh, how they shine; costume designer Gregory Hiatt really outdid himself. From the bold, geometric go-go outfits to the sparkly ones, each new costume (and there were lots of costumes!) hit the nail on the head. I found myself consistently growing more impressed, both with Hiatt’s sheer talent and the speed at which the cast managed some of those wardrobe changes. All in all, a lot can happen with popular styles during the course of one decade, and Hiatt managed to seamlessly incorporate everyday looks with fancier options spanning all 10 years of the 1960s. Hiatt’s costumes would not have felt nearly as complete, however, without Dianne Dye’s far-out wig design. Good golly, the hair in this show is the cherry on top of a very delicious ice cream cone.

From the start of the night, with the Bootleggers' pre-show making me laugh, to the final curtain call, my time at Circa '21 was well spent. There might not be anything groundbreaking or life-changing in Beehive: The '60s Musical, but it’s assuredly a ton of fun. I can think of no better way to kick off summer 2021 than with this upbeat night out. So before you break Circa’s heart by passing on this show, think it oh-over.