Water, Water, Everywhere, Nor Any Drop You Should Drink: “An Enemy of the People,” at the Mockingbird on Main through October 9 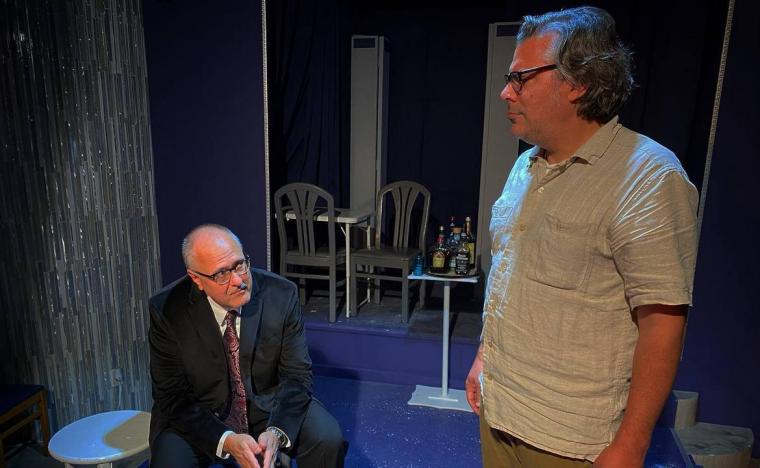 Doug Kutzli and Mischa Hooker in An Enemy of the People

It was a fast-paced, immersive night of theatre on Saturday during the Mockingbird on Main’s production of An Enemy of the People. The venue was very clear, from its social-media post and pre-show announcements, that the cast uses the entire space as their stage, and while I’m not typically a huge proponent of being right up in the action, it didn’t bother me as much as I anticipated. This unique venue is intimate, so simply turning your chair makes for an easy transition from one scene to the next.

Alexander Richardson’s modern adaptation of Henrik Ibsen’s classic follows the main storyline in which a town’s water supply is being polluted. It’s a timely look at science, truth, and how the media can perpetuate whatever version it wants to, yet Richardson’s plot strips away much of the story’s incidental material and keeps the evening fast-paced.

Truthfully, what this production lacked was the opportunity to root for any one character, as none were particularly likable. Once Dr. Tomas Stockman (Mischa Hooker) determines that his town's water supply is dangerous and causing many mysterious ailments, he has to go up against his brother, the town’s mayor Peter Stockman (Doug Kutzli) to get to the truth. From my perspective, neither Stockman brother seemed to like or respect each other much, so the stakes didn’t seem very high. Hooker brought a scattered, naïve quality to the role of Tomas; even his knowledge of his brother’s previous misdeeds couldn’t dissuade his optimism that everyone would ultimately do the right thing. He’s a respected doctor after all: Why shouldn’t a company invest millions of dollars to reconfigure their sewer lines? As for Kutzli’s Peter, he was pompous, surely, but his threats seemed vaguely hollow. 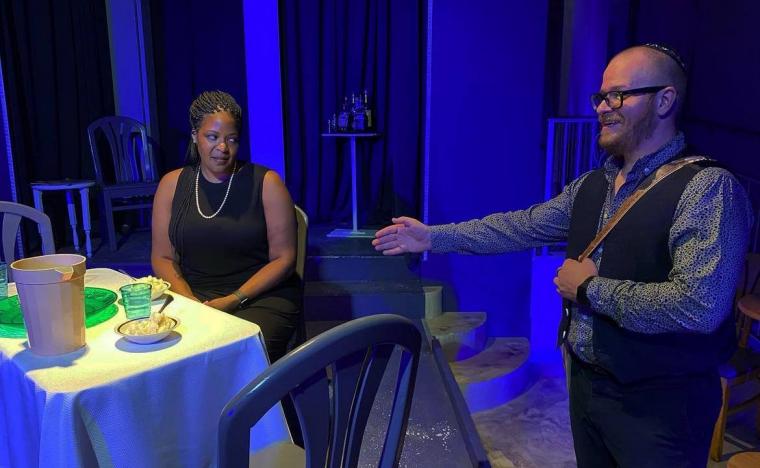 Tomas enlists the help of the town’s newspaper editor Hovstad (Ian Heaton) to get the word out. Hovstad was likely the most even-keeled character, which was a relief. However, the editor didn’t seem too preoccupied with breaking the news in the way I expected. In truth, Hovstad's contrasting emotional states suggested that he was maybe new in town and not caught up in local drama just yet. (There was, however, plenty of back-and-forth dialogue between Hovstad and Tomas about whether they would, should, or could print the story announcing both the pollution and its source.) Ultimately, this Enemy of the People's Tomas felt like less of a whistleblower than I anticipated, and Hovstad surprised me with his willingness to potentially keep Tomas' story under wraps.

Richardson's adaptation featured a generous use of asides, and director Victoria House made some nice choices with lighting shifts to punctuate these moments of internal dialogue. I was, though, a bit confused as to the play's time period, as there was a rotary phone suggesting a bygone era, but the costumes were decidedly modern. Was this a subliminal suggestion that Ibsen's story is timeless? Director House doubled as costume designer, and I'm pretty sure as the bartender, too – a character that was a hoot, especially considering she scrolled her non-rotary phone throughout the scene. But the costumes were all over the place in a good way. My personal favorites were Peter’s suits, Petra’s T-shirt in the bar (one that delivered a subtle message perfect for the script), and Tomas’ Spider-man hat used as disguise. 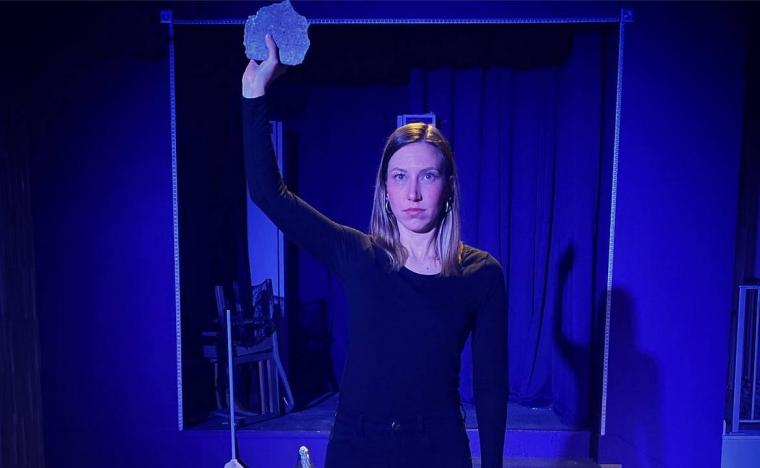 It was the extreme sense of heightened reality that pushed this production past the point of true realism for me. While the cast was small, their personalities and vocal qualities packed a big punch – almost as though each actor chose a specific trait as their entire motivation throughout the evening. For instance, Jo Vasquez’s portrayal of Tomas' daughter Petra was angry. From our first introduction to Petra, with her exaggerated eye roll, to her time spent at the local hole in the wall, to her final moments, Petra was continuously moments away from boiling over. It was frankly exhausting to watch, though Vasquez did make me laugh more than anyone else in the show.

Alisha Hanes played Tomas' wife Katherine, who seemed more or less apathetic to everyone. Oddly, even though Hanes’ portrayal of disinterest was heavy throughout much of the play, there came a point that made me completely rethink who was the play's true antagonist. Every decision Katherine made seemed questionable, and through the employment of some projections and audio clips woven throughout scene changes, we glimpsed a whole other chapter of her story. I wish there was a little more there, if only to see exactly what Katherine hoped to gain through her decisions. She made me wonder: In this telling, who is the true enemy of the people?

Even though the action was all around me, the play's elevated emotional state allowed me the chance to remain a simple spectator. And while I don’t think Richardson’s script does Ibsen a disservice, I do feel it missed the mark a bit if the production’s overall goal was to offer the possibility of discussion regarding how the 1882 story relates to 2021 events. No matter. An Enemy of the People is a unique theatre experience you won’t soon forget.

An Enemy of the People runs at the Mockingbird on Main (320 North Main Street, Davenport IA) through October 9, and more information and tickets are available by visiting TheMockingbirdOnMain.com.