We, Ourselves, and Us: “Their Town,” at the Playcrafters Barn Theatre through March 15 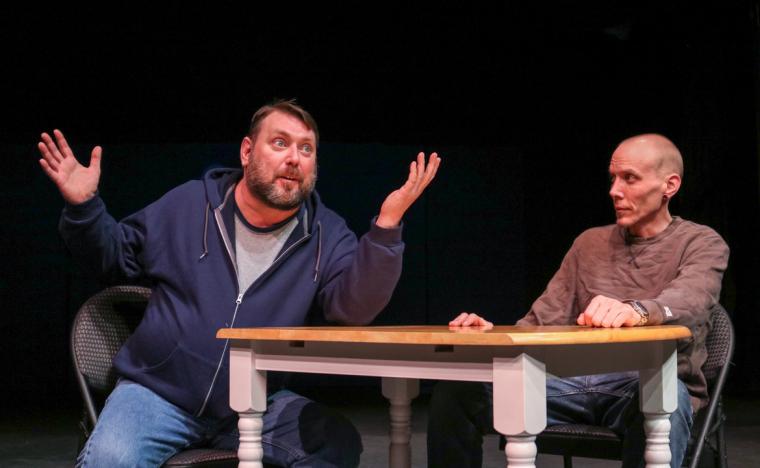 Brant Peitersen and Jesse Mohr in Their Town

The Playcrafters Barn Theatre's Their Town is this season's first production in the venue's Barn Owl series of newer (or debuting) plays, and this year, all four “Barn Owls” are by local authors. Playwright Alexander Richardson has not only kicked off the 2020 series with a strong script, but has also, along with his and director Elizabeth Melville's cast and crew, given the upcoming presentations much to live up to.

As theatre aficionados will notice, the production's title is a nod to Thornton Wilder's 1938 classic Our Town, as is the entire play. Our Town was notable in its time for its sparse set, and for some characters' ability to break the fourth wall – that is, to address the audience directly. We get those elements here, too, but this present-day, pared-down homage is not a sequel, and you don't need to have seen Our Town to understand Their Town.

In this ode to modern life in a mid-size Midwestern community, I admired the effective use of Chyron-style projections on the back wall establishing the time of day, the names and ages of numerous characters, and sometimes the addresses of locales, all of which enhanced the slice-of-life format with a documentary feel. And Melville, who impressed me greatly performing in Playcrafters' She Kills Monsters and 4000 Miles last season, proves that she can direct, too. The show's bare-stage aspect may make set construction easy, but it presents great challenges to the director and actors by focusing audiences' attention on the action alone – and it's minimal action, at that. Each vignette here takes place in a limited space with only a chair or two or a table, and there is no scenery for actors to wander through. Other than costume changes, performance is all. 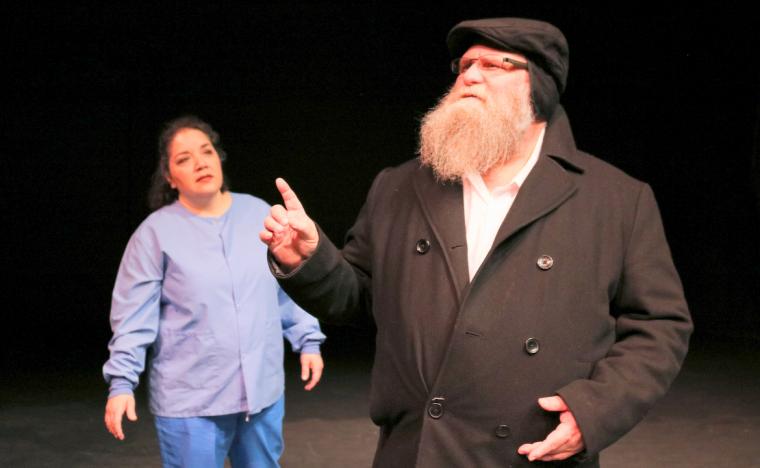 Jesse Mohr's He and Alexa Florence's She, modeled after Wilder's Our Town Stage Manager, are the shape-shifters who become a variety of characters throughout. Both are strong performers, and anchor the show satisfyingly. Mohr is strikingly adept at transforming from confident to pathetic to eccentric personae, and Florence is a treat to watch as she portrays characters ranging from teen to oldster and points in between, enjoyable in each role.

Kassidy Holdridge and Ethan D. Mason play the lovers of the piece (with their character names Emily and George borrowed from Wilder's script), and their relationship is true-to-life and convincing. They say as much, or more, with their faces and postures as with their dialogue, and easily drew me into their world.

Among Their Town's other figures, Brant Peitersen's Mike faces a downgrade in his long media career (and possibly the end of it) due to changing times. I identified strongly with this terrifying “ripped from the headlines” situation, but even if you've never walked in his shoes, Mike is a charismatic, sympathetic character whose dilemmas will move you. Lance Maynard contributes a wonderful turn as Bernard, a loveable, spirited crank. He lives in diminished circumstances, is threatened with the loss of his house, and most people have forgotten about him. (I'd be cranky, too.) Still, he gets by tenaciously with an enduring sense of humor – as he notes, “It's all I got.” And Cierra (Lidia Gomez) figures in multiple plotlines and takes on several roles in her life, as do we all. I enjoyed Gomez's quiet comedic moments and expressive face, with one especially striking bit occurring while Cierra is sitting in a park. As she gazed in quiet appreciation over this natural haven, I could see the park through her eyes – feeling its size, knowing that tree branches were moving overhead, hearing kids playing. 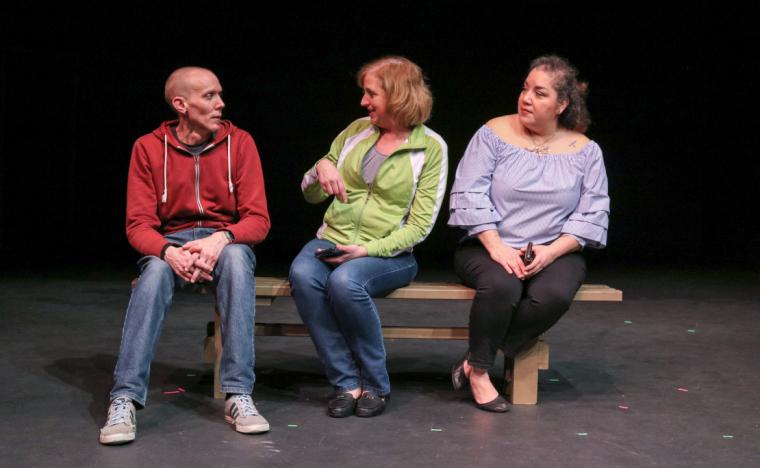 I must say, though, that sounds were employed so naturally that maybe I actually did hear kids playing. Richardson, who also served as sound designer, enhanced the almost-bare stage immensely with convincing effects, including a grocery-store scanner and cell-phone notifications.

Speaking of phones, the actors used real ones, but all other props are mimed. I've seen selective prop-miming in other productions, too, and in my view, either all props should be mimed, or all should be real. Also, these unseen “props” were not always convincing. I'm not saying it's easy to speak and wield imaginary props simultaneously, but at times the manual execution was so slapdash that it distracted from the scene. On the other hand, some of the miming was marvelous – including one character's mighty battle with a stuck door; another slipping a small piece of paper into a pocket; and yet another's channel-surfing, clicking the remote as audio fragments of TV shows played.

In truth, Friday's performance started slightly wobbly for me. The dialogue seemed a bit overwritten, and the performers were a little stiff and slow on cue pickup. However, once it got rolling, the pace and situations were enthralling, and I forgot I was watching a play. (I love that.) I suspect that no matter who you are, you'll find a Their Town character – probably more than one – with whom you'll identify. And at five to 10 dollars, tickets for Barn Owl productions are a bargain. I encourage you to check this one out and be amazed by the breadth and depth of our local talent.

Their Town runs at the Playcrafters Barn Theatre (4950 35th Avenue, Moline) through March 15, and more information and tickets are available by calling (309)762-0330 or visiting Playcrafters.com.